You are here: Home1 / Life of A Fairy Bra Mother Blog2 / New bra-maker? Start here3 / A Bra that Fits

A Bra that Fits

No matter who makes them, bras have a few components that are common to most. A bra that fits needs cups to contain the breasts, a band to hold the cups up to the breasts and a closure of some sort to keep it fastened around the body. The bridge is the connector piece that holds the cups together in the front. This piece may or not be visible as a separate piece, but may be built in to the cups. Straps are an integral part of most bras, but should never be the primary support for the cups. Style differences aside, every bra you buy (or make) should be viewed with a critical eye for correct fit and comfort. If it doesn’t fit, it isn’t right, no matter how comfortable or stylish it may be. 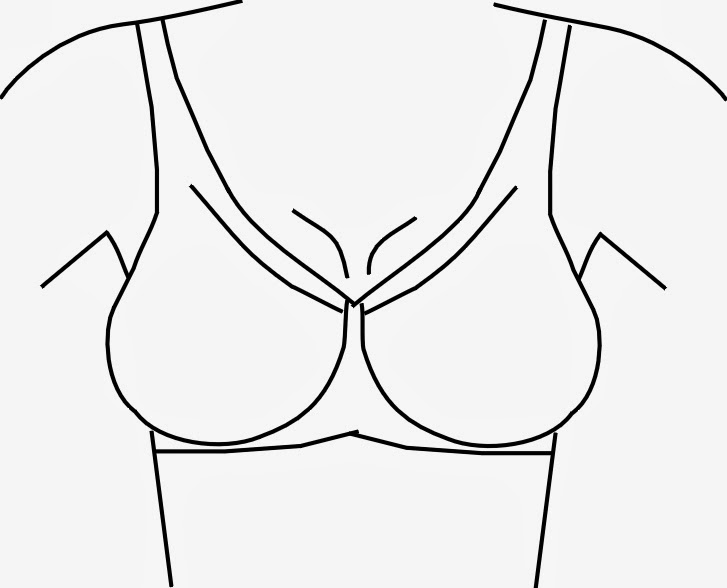 Whatever your preference for cup style, there should never be breast tissue bulging out over the cups as shown above, nor should there be any creeping out at the sides or from underneath. To do a quick check on the fit of the cups, place your finger on the bridge area of your bra and press in. The bridge should lie flat against the chest wall. It should not have space between the chest wall and the fabric. Feel along the front edges of your bra and down the seam under your arm. Are there any bulges? If so, you need a larger cup. If you pull your shoulders back you shouldn’t see any little rolls above the bra.
Bending over to retrieve a fallen object should not have you replacing your breasts back in the bra, nor should an upward reach cause you to reposition them. This is awkward for the wearer when it happens and can be socially embarrassing! The breast tissue should fill the cups completely, with no gaps or wrinkles at the front of the cups. If one breast is larger than the other, you can purchase ‘cookies’ or gel pads to bring the smaller cup to the size of the larger. 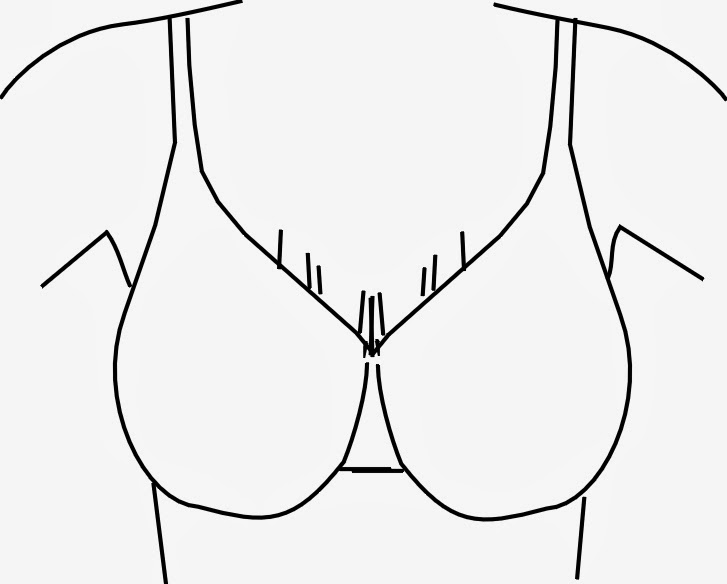 Conversely, if the cups are sagging, this is an indication that the cups are too large, or made of a non-supportive fabric. Women will often object, saying “but the bra is so comfortable”. Just because it is comfortable does not mean that it fits, or flatters. Your bra can do both, and still be comfortable to wear. 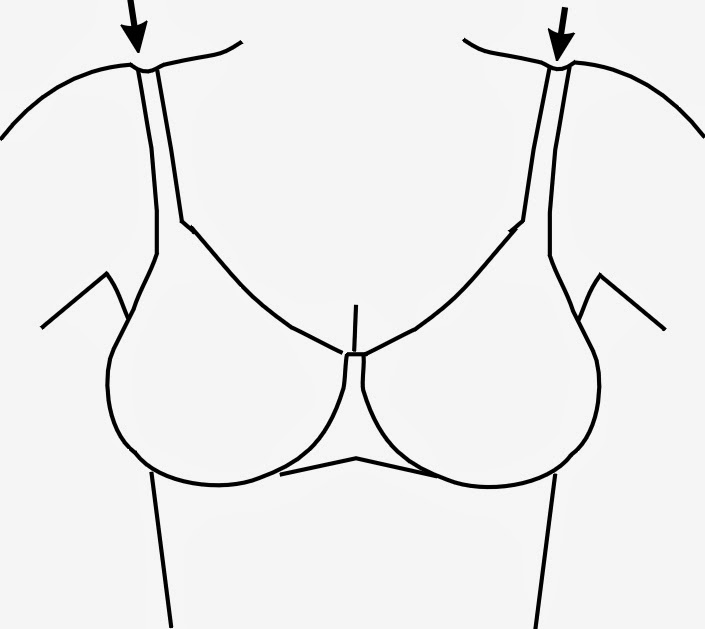 Straps vary in their construction and their composition; some are elastic, others are made from fabric, several may be padded for comfort and still others have shoulder pads built in. Whatever the style, straps should lay flat against the body, with no twisting, curling or straining of the fabric. If there is strap adjustment hardware on the strap, they should be free from burrs and gouges, both can be quite painful to the wearer. Straps should never create dents in the flesh as shown above, but should only carry minimum weight. Straps that are carrying too much weight, dig into your shoulders, not only permanently indenting them, but also adversely affecting circulation to and from the arms. Cups that fit well and are supported properly by the band shouldn’t need massive strapping (after all, a strapless bra doesn’t need them!)
Straps should also be placed to correctly sit on the shoulders. If the strap setting is too wide, there will be a gap along the neckline edge of the bra, which will often be interpreted as incorrect cup fit. The breasts should be lifted a little higher than their normal “at rest”; position, how high is a matter of personal preference. The apex on most women occurs about midway between the shoulder and the waist, but breasts that are naturally closer to the shoulder indicate a high bust, breasts that are closer to the waist indicate a low bust. Differences such as these are normal and cannot be changed by adjusting the straps.
To determine where your breast height naturally occurs, wear a bra that has the straps adjusted to the highest point where it doesn’t hurt, then hold something straight (like a ruler) horizontally at your collarbone (the two bones at the base of your front neck) and tie a string or elastic at your waist. Look in a mirror. The fullest part of the bosom are usually at mid-chest level, halfway between the waistline and the collarbone. If the breasts are closer to the waistline, you are naturally low-bosomed. (Many women think they are short-waisted when they are just low-bosomed.) Recognizing this about yourself will help you buy not just a bra that fits, but clothes that fit better, too! 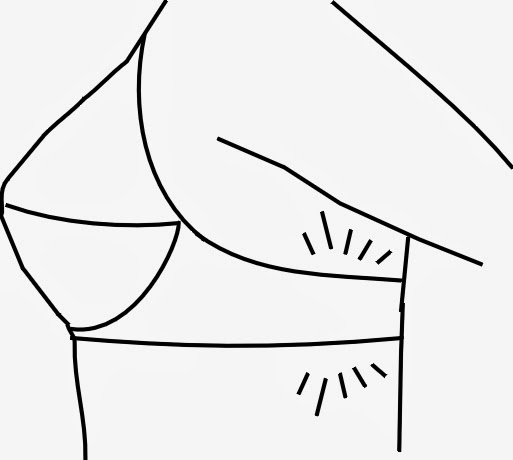 The band is engineered to carry the weight and thrust of the cups and is the primary support element in the bra. The band should not dig into your flesh as shown here, but should be snug enough to engage the pull of the elastic. When the bra band is too snug, it also draws the underwires into your ribs and will bend them along the lower cup side or the bottom, digging them into your ribs. By the end of the day, this can be sheer torture. 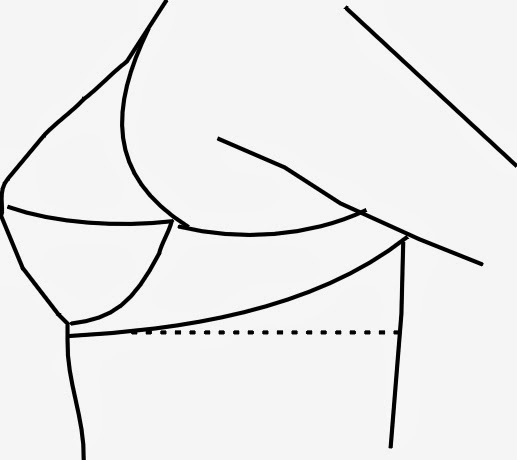 On the other hand, bands that are too loose are in some cases worse than those that are too tight. Bra specialists agree that the band should fit well enough not to slide around your chest. If you can put the band on backwards and slide it around easily to the front, it’s too loose. Wear a smaller band size or use the next-smaller row of eyes. If the band rides up in the back, that’s a sure sign that the band is too loose. It may be that you need to go to a smaller band size, or it may be that your elastic has died. (If the elastic is dead, the bra is dead!) 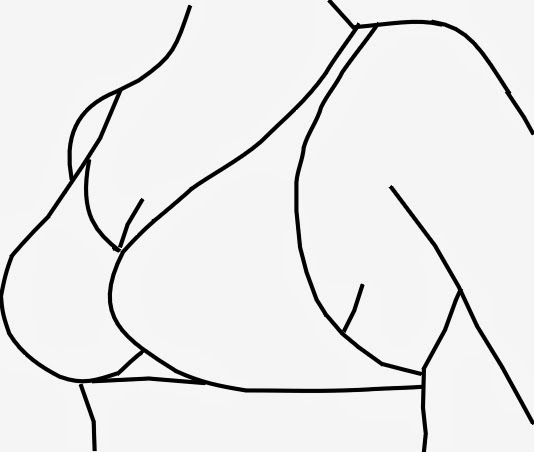 There is a more compelling reason to keep your band snug. Think of your upper body as a teeter-totter, with your breasts on one end and your bra back on the other. Your body is the fulcrum in the middle. As the bra back slides up in the back, the breasts will come down (sag) as shown in the picture here. Sagging breasts are most often the result of a loose band, but it can also be caused by a fabric used in the cups that is far too stretchy to be supportive. As you will learn, the fabric choices for bra-making are of the utmost importance. Some bra styles seem to expose a lot of breast tissue at the side near the underarm as shown in the drawing below. This style of bra with very narrow bands is meant to be worn by those who don’t need the support of a bra. Most women need a band that is wide enough and of fabric with enough strength to give real support to the breasts.

Underwires that poke the breast tissue or your arm as you move it forward, are definitely too small. If the underwire is poking you in the armpit, it may be a sign that the diameter of the wire is too big, or the underwire itself is too long. If the underwire at the center front does not lie flat, but comes out at an angle from your body, or curves, or is anything but vertical along the chest wall at center front, it’s not right. The cup depth or the bridge will need to be altered in order for the bra to lay flat against the center of your chest. In short, a bra that fits should have enough cup room and support to be comfortable and effective without digging, sagging, poking or bulging anywhere.

Bra Fit for Every Body
3 replies