You are here: Home1 / Life of A Fairy Bra Mother Blog2 / Life of the Fairy Bra Mother3 / Our Enchanted Castle4 / Let it Snow!
Let it snow! When I was younger, my mother would get all excited about the day after a snowfall. If it snowed hard, the kids would be home from school, under mom’s feet. It wasn’t that day that mom looked forward to. No, sir.  It was the day after the snow fell (and we were back in school). I called it Snowfall Boxing Day. 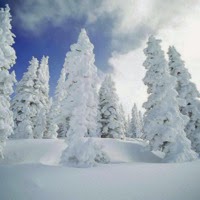 What my mother liked about the Snowfall Boxing Day was that she gave herself permission to knit or to sew all day on those days. Her reasoning, I guess was that you couldn’t really do much else and the snow has already been cleared the day before. You might as well accept and rejoice in winter’s beauty. The day after the snow meant a fresh, clean layer of pure white snow that caught the sunlight like so many diamonds scattered on the ground. My parent’s house had a sun porch on one end that overlooked the field and the tree line so there was a fair amount of diamonds spread at our disposal.
It wasn’t long before the sun porch with its ratty couch became a sun room winterized with a new sofa and TV (for Dad to watch while mom was knitting). The next renovation came more in the guise of redecorating – mom moved her sewing machine and its entourage of cupboards, cutting tables and sewn stuffed animals out there. Dad somehow found himself moved to one end. The sunroom became the focal point of the house as much as the kitchen was the focal point of holiday meals. She could lift her head from her sewing machine and there would be the snow field. It gave mom a secure feeling. We were all safe and warm, and sewing or knitting.
As an adult, generally I crab about the snow. That’s because of the shoveling of the driveway, the walkway, the sidewalk, the car and the driveway AGAIN when the snowplow fills it in. But last night it snowed, and when I got up this morning, the day greeted me with sparkling diamonds spread out across my back yard. I was suddenly taken back a few years. So let it snow! Maybe this would be a day for sewing, even knitting (I’m still working on a pair of socks I started at the Saskatchewan Stitches conference 11 years ago) Maybe not knitting. Sewing, for sure.
March 19, 2014/0 Comments/by Beverly Johnson
https://www.braandcorsetsupplies.com/wp-content/uploads/2014/03/Snow-cat.jpg 370 500 Beverly Johnson https://braandcorsetsupplies.com/wp-content/uploads/2017/01/BMS-Website-Logo.png Beverly Johnson2014-03-19 17:50:002016-07-31 09:19:37Let it Snow!