You are here: Home1 / Life of A Fairy Bra Mother Blog2 / Behind the Seams3 / Swimwear4 / Swim Masters Digital Fashion Show

Today’s the day for the Swim Masters digital fashion show. The Swim Masters class is a 5 day class for students who already know how to make swimwear, so it truly is a class in which you can master swimwear. I often hear “why does it take  5 days to make swimwear?” The short answer is “it doesn’t” but in reality, once the students see what can be done, they will kick things up a notch, and another and another. All I can say at the end is WOW!

Lets look at what they did the last few days. We started off the week with a trip to two different fabric stores. The we came back and settled into the business of sewing the basic tank, or maillot (pronounced My-Oh). We fitted everyone for the pre-formed swim cups ( you could use the MLQ style) and they learned the basics of lining, elastics and Lycra.

Here’s one of the pattern they were given as part of the course – the Denise Swimsuit by Pin-up Girls. You can see there is a tank and a princess line suit and two different backs

Even though the instructions for the first assignment were for a basic tank with a scoop back, those students just HAD to add some glam to this project. Erin’s  tank looks like liquid gold! 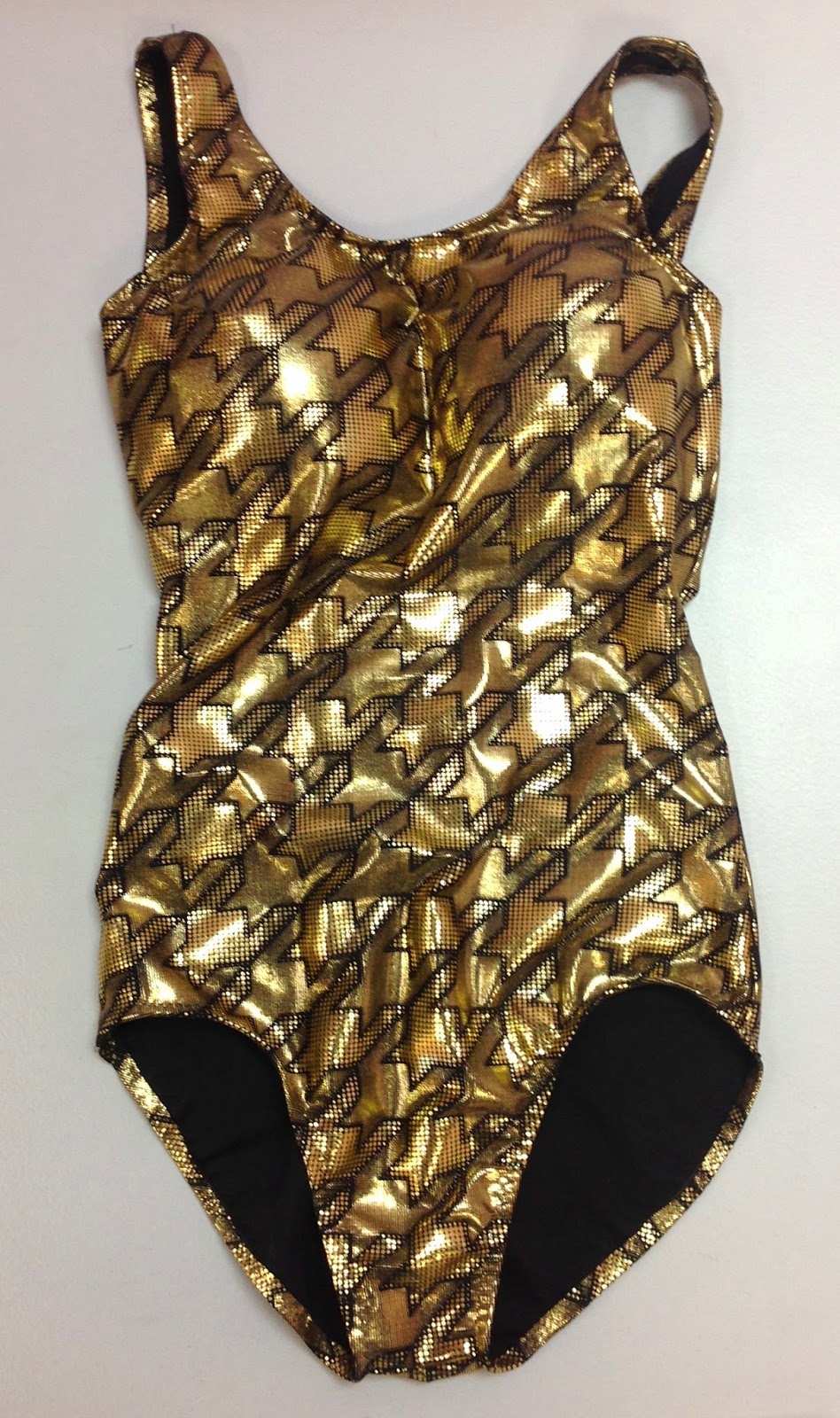 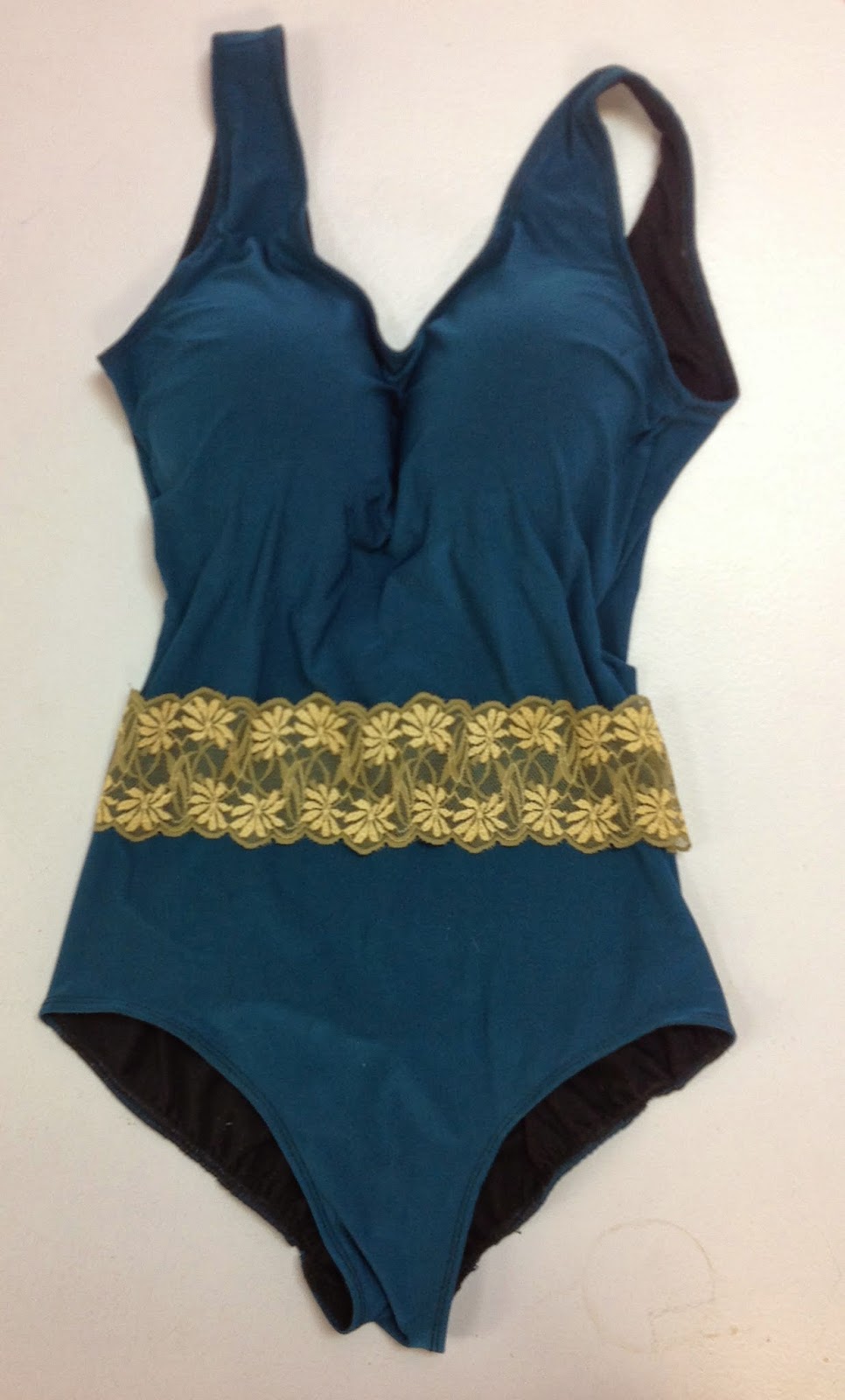 Lizzie made a stunning glittery gold and black stripe tank 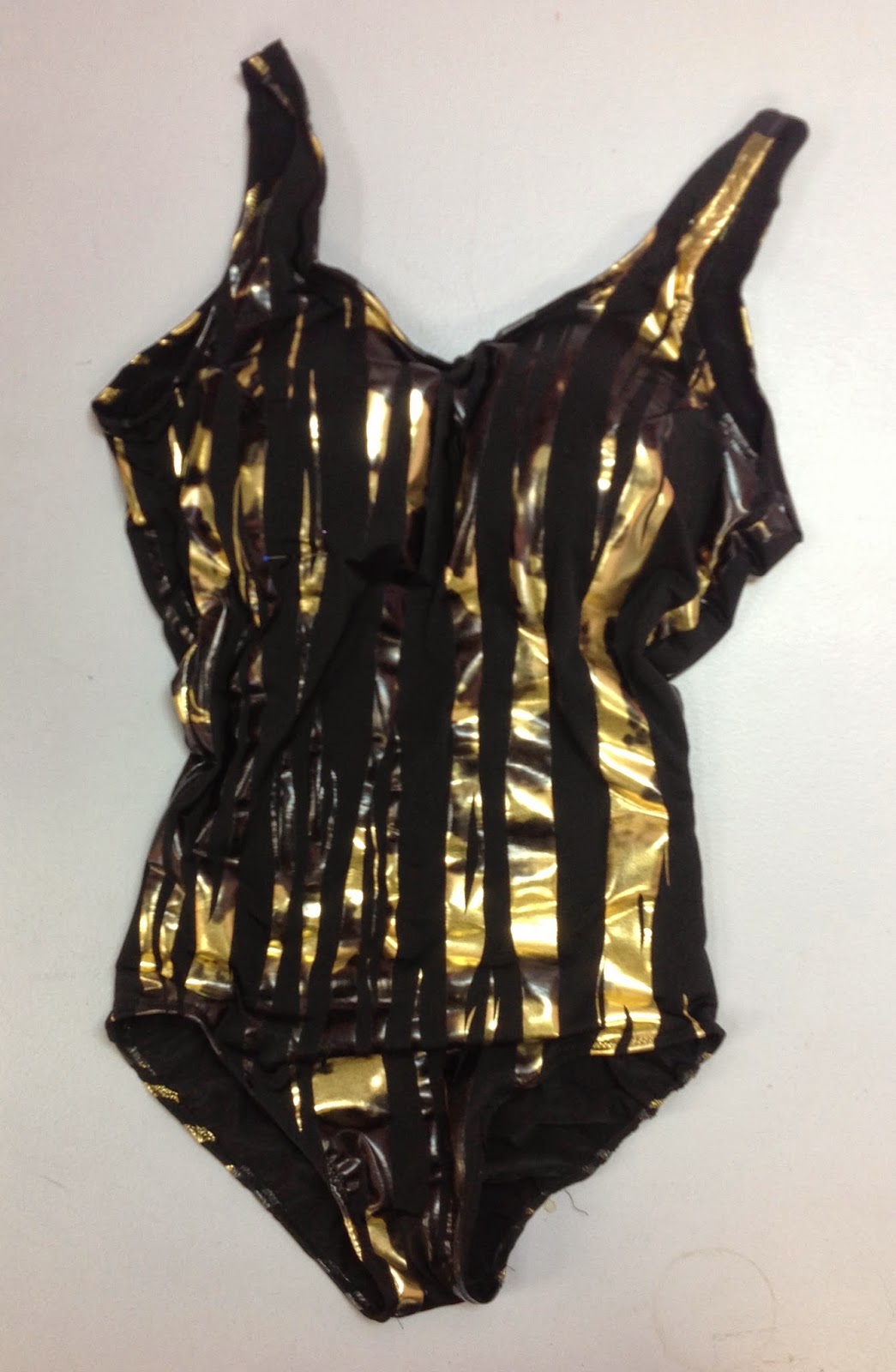 Holly made a tank with glitter as well, then after a few days she put a skirt on it! She assures me she will cut the skirt shorter! 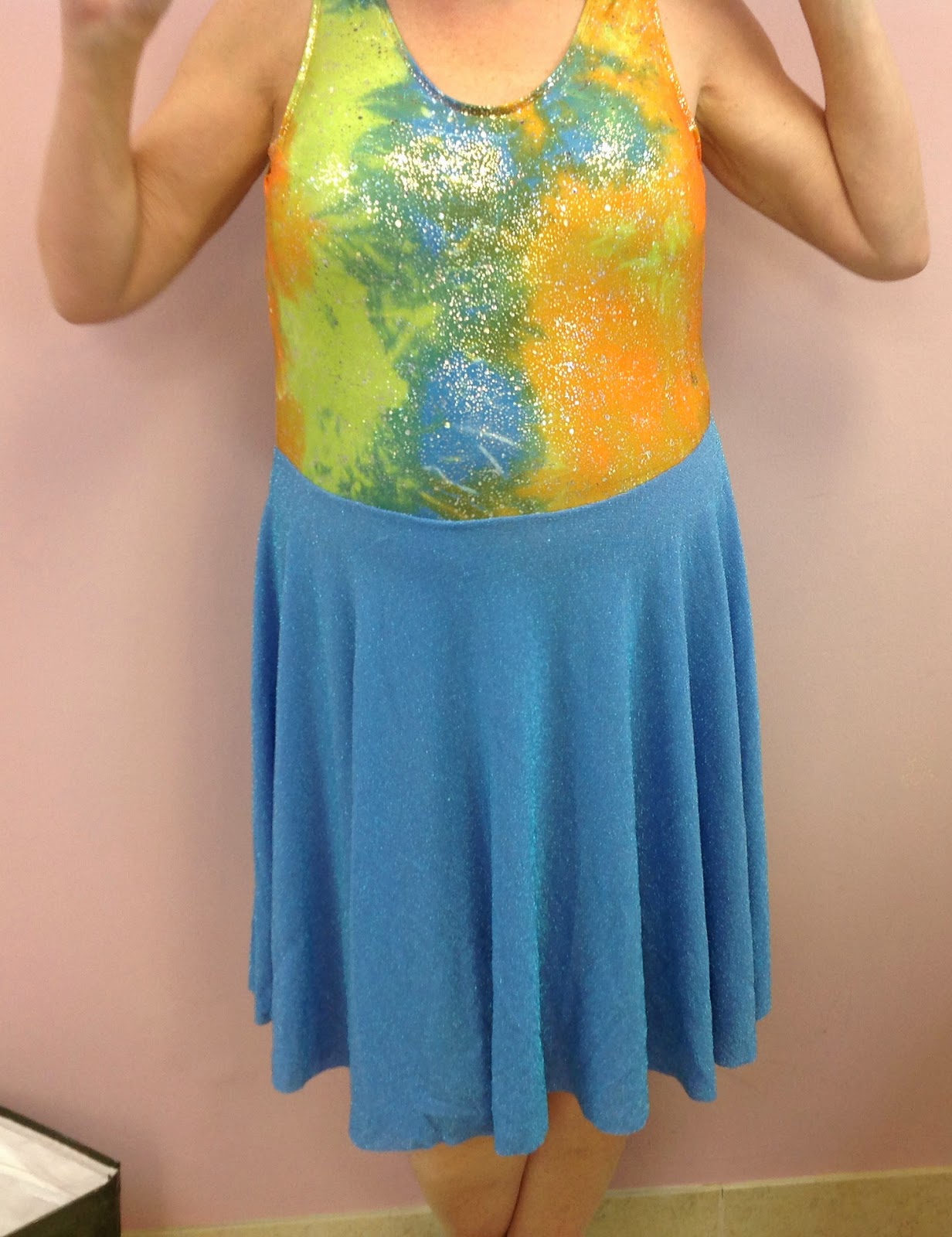 Later in the week, they were asked to make a princess suit – with a bra back and a free-floating bra built inside the suit (which meant they had to sew up a bra from swim cup foam). Even with the added challenges of the new suit, I should have known this group couldn’t make a plain ol’ princess!

Although you can’t see the detail of the fabric, apparently it is a reflective print, so Naomi can be seen in the dark! She did some ruching in the centre front. (“please, please, please, can I do some ruching?” is what I heard!) 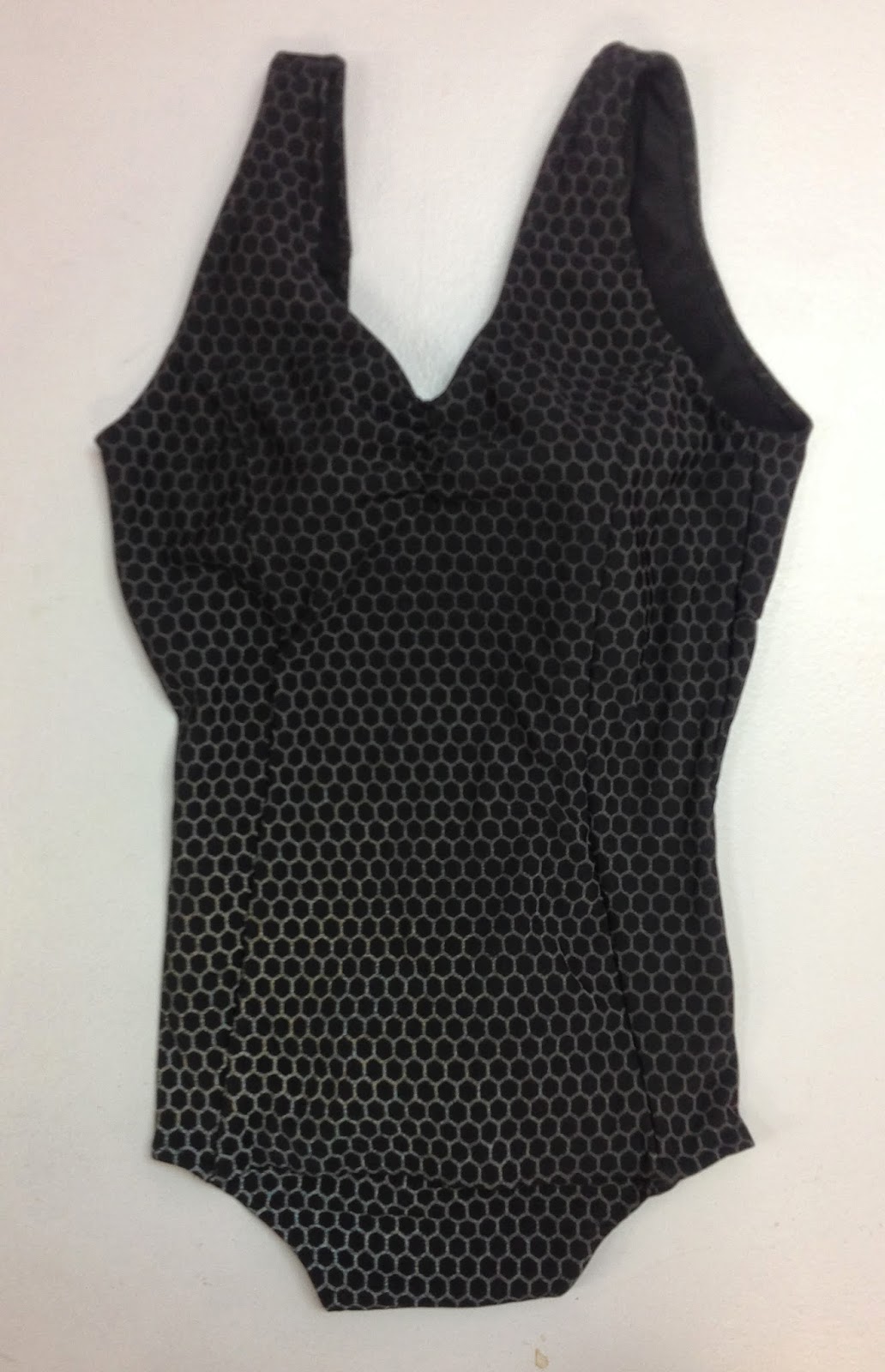 Lizzie decided on a striped fabric, which she cut on the diagonal to make perfectly matched chevrons. This fabric was a real challenge – I am not sure I would have stayed with it but she did. She even did a “Brazilian scrunch” (otherwise known as Bum ruching) in the back! Once you let one student do ruching, the gates are open for everyone! 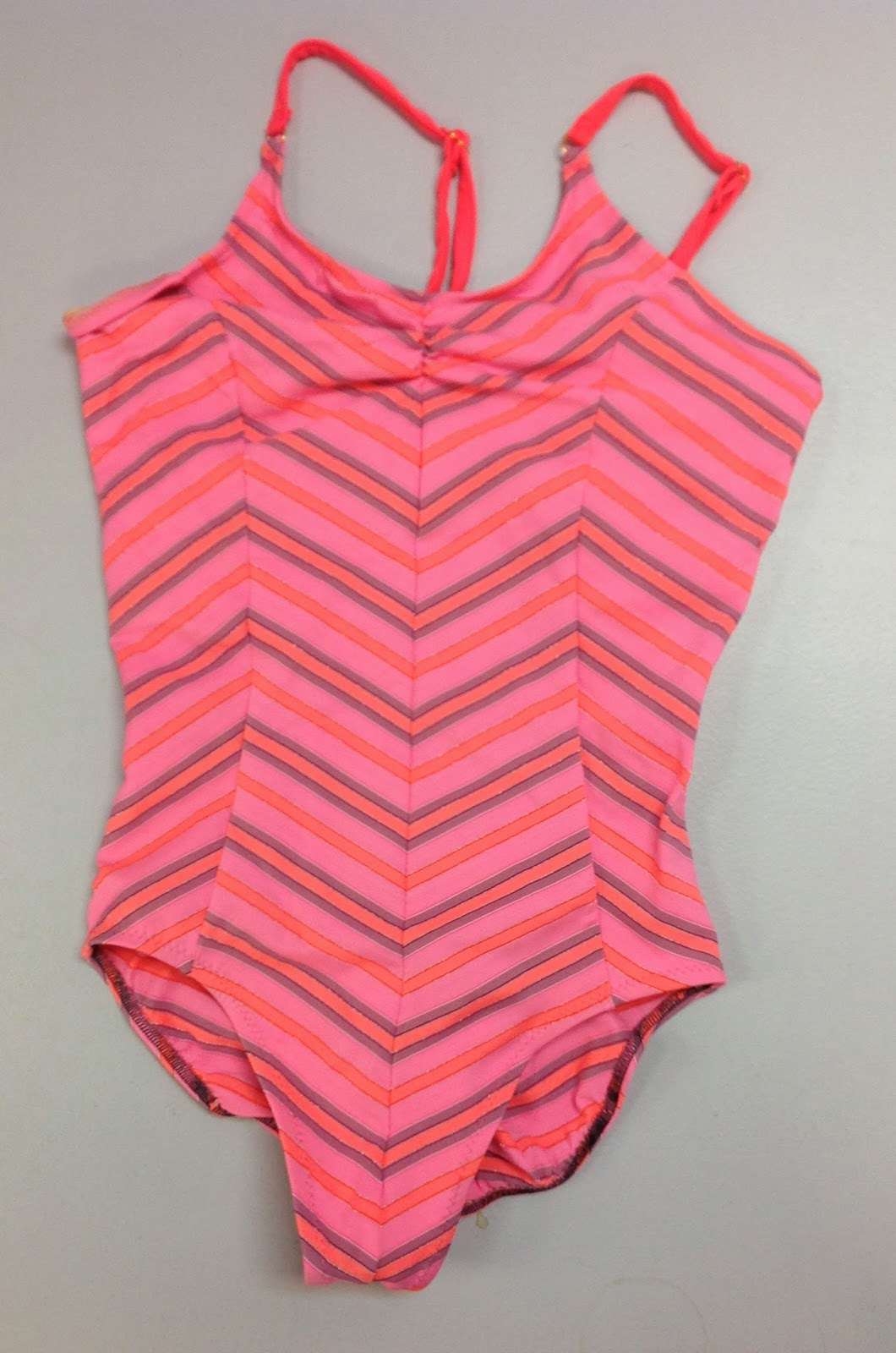 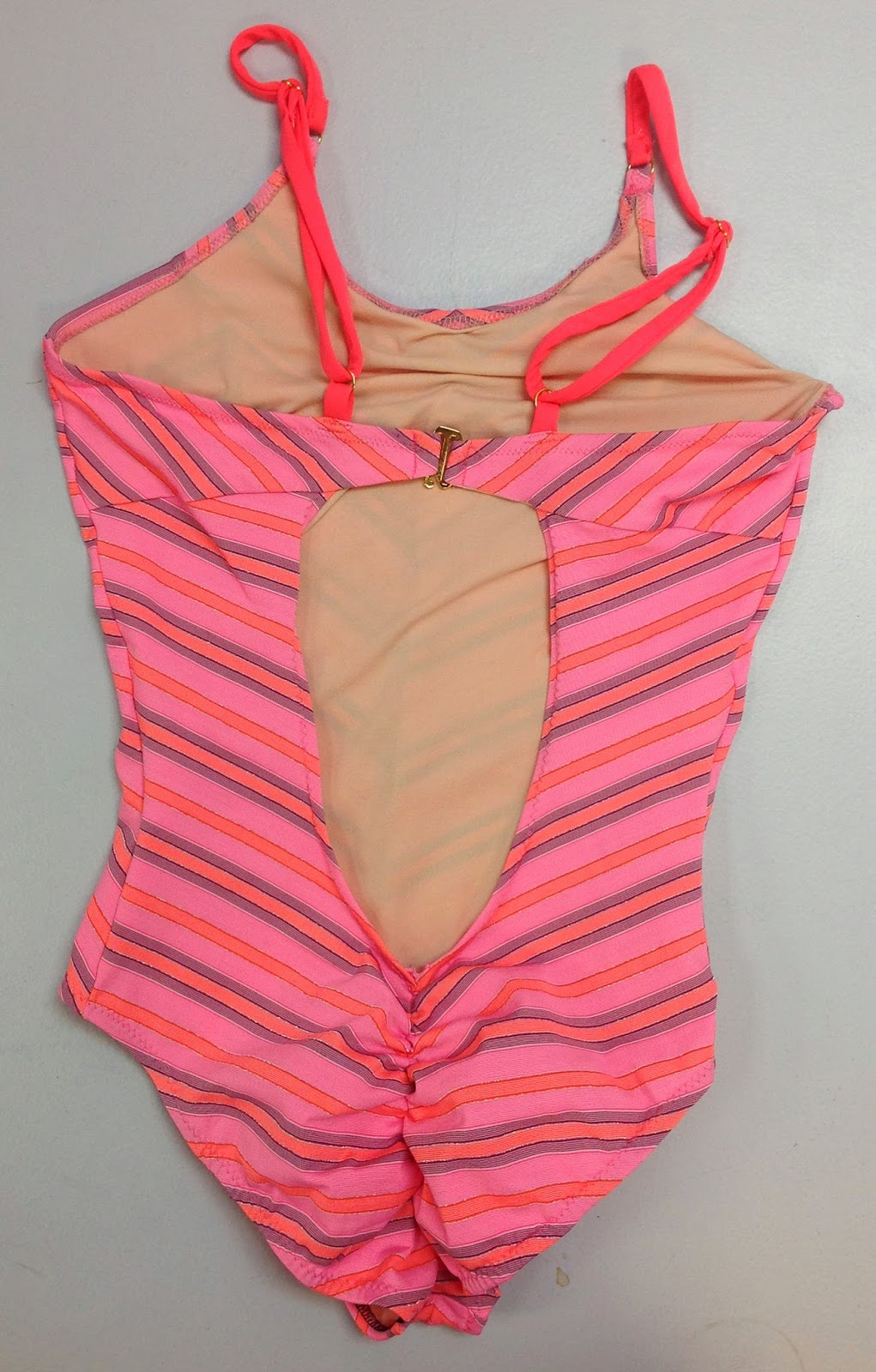 And more ruching, from Erin. She couldn’t resist, ruching the whole front panel, and turning it into a modesty panel in this great retro print. Holly added glam in this iridescent print. She added something else too, but I will save that for later! 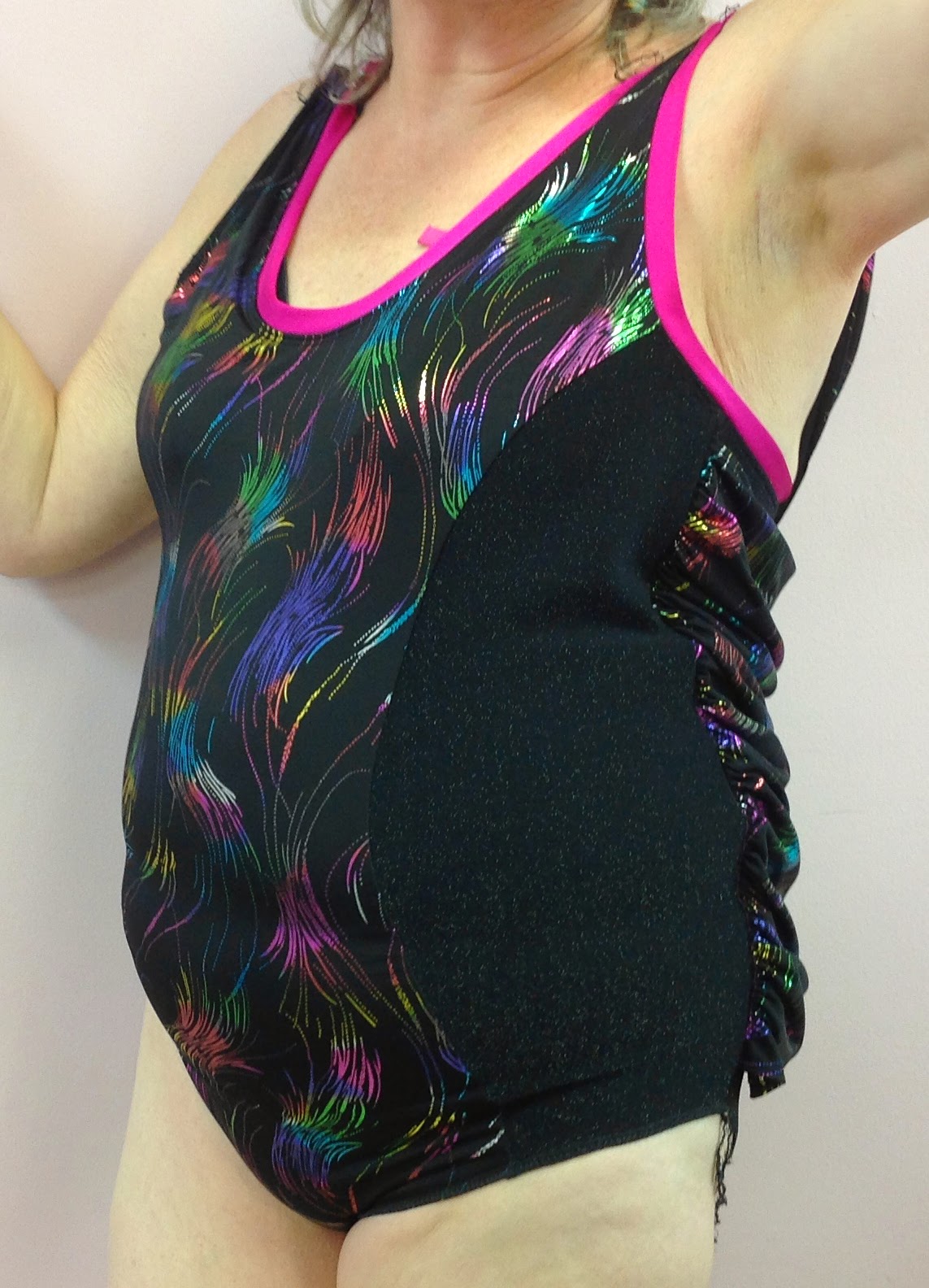 The students all agreed that although the pre-formed swim sups were nice enough, once they experienced the built-in free-floating bra, there was no going back! Wait until you see what they did next!

I told them they could do a triangle bikini and two of them did just that (using the triangles and tanga pattern). Erin made a super neon spandex bikini for her sister, but has since claimed it for her own! She will make her sister another one 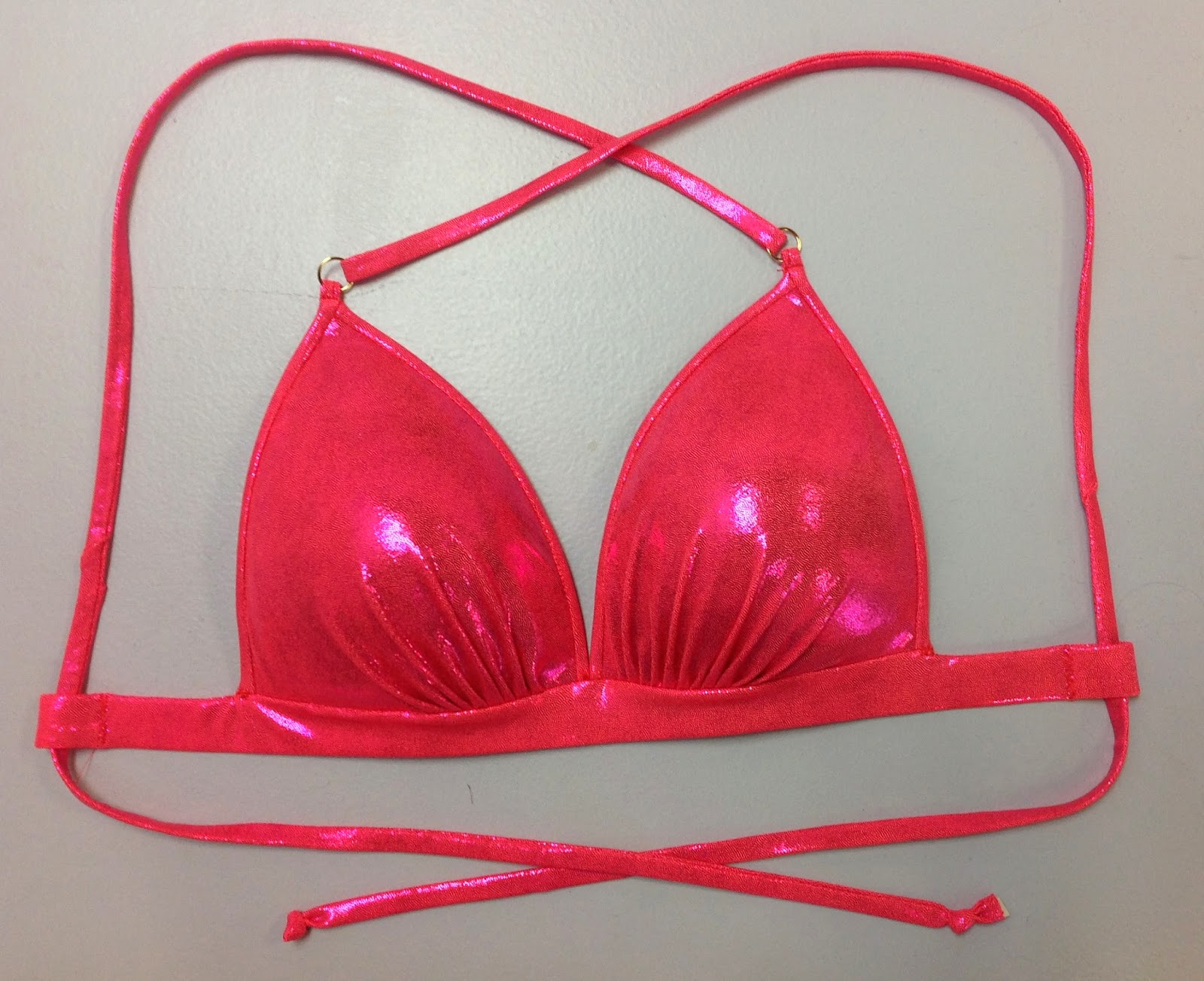 Lizzie made her triangle bikini out of this lovely and colourful fabric she found on our buying trip. It is not finished as we had “issues” with the new industrial cover stitch machine. 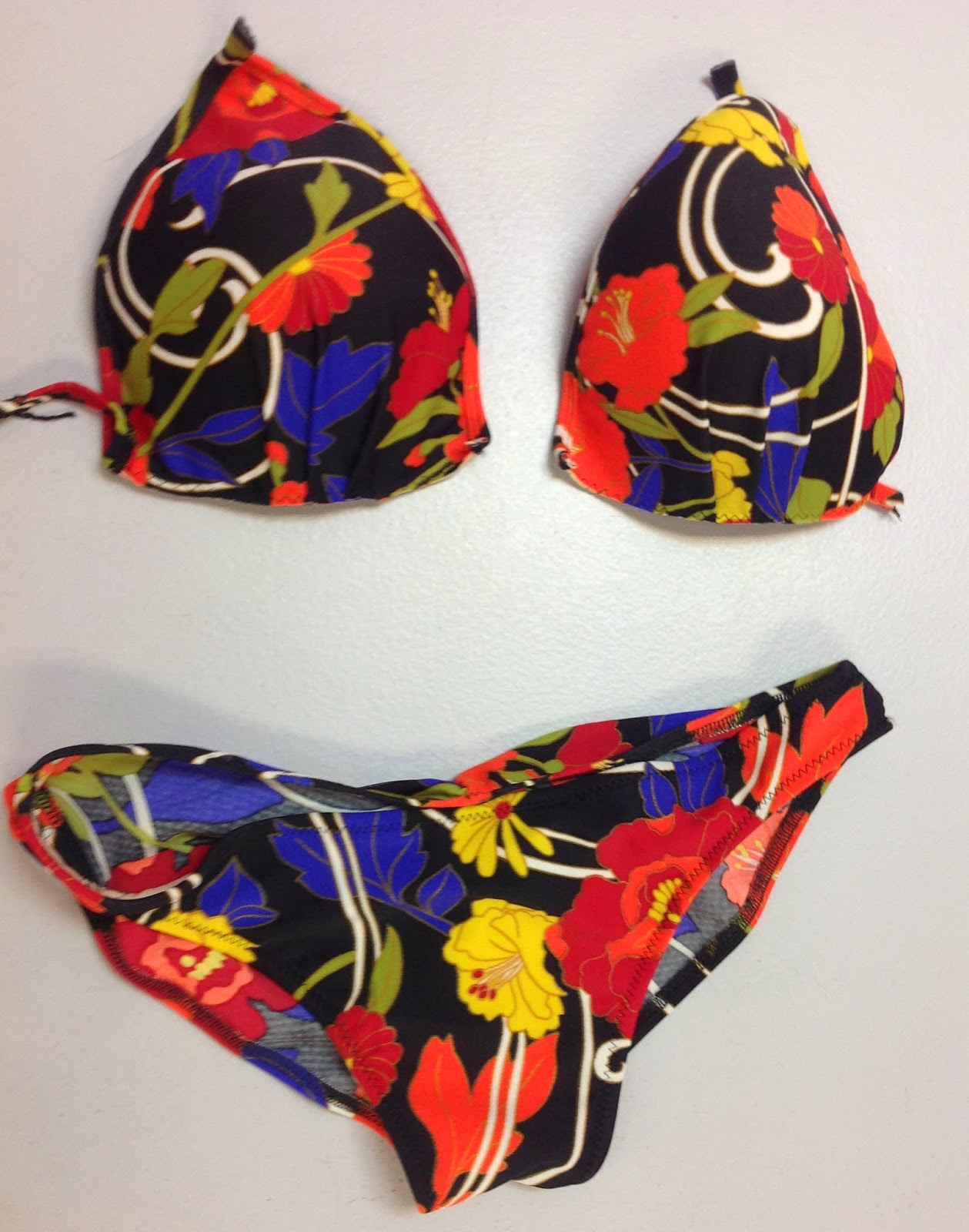 Would you believe that Naomi and Lizzie bought the same fabric? Naomi made a pullover princess crop top, fully lined with the shorts to match. 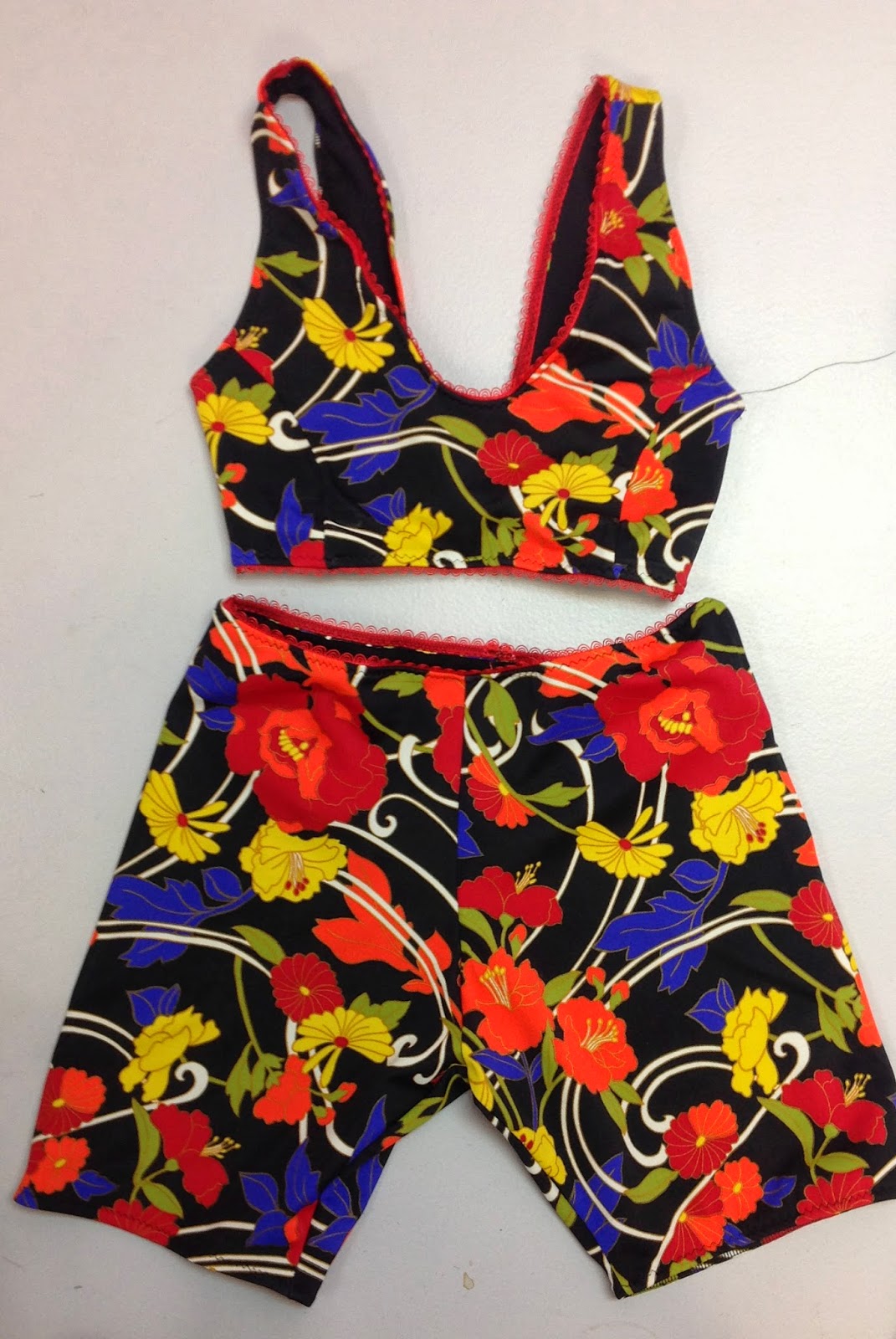 And they kept on sewing in Swim masters Week! Naomi made this suit for a friend of hers. It’s plain black with a sparkle print for those lovely back straps! 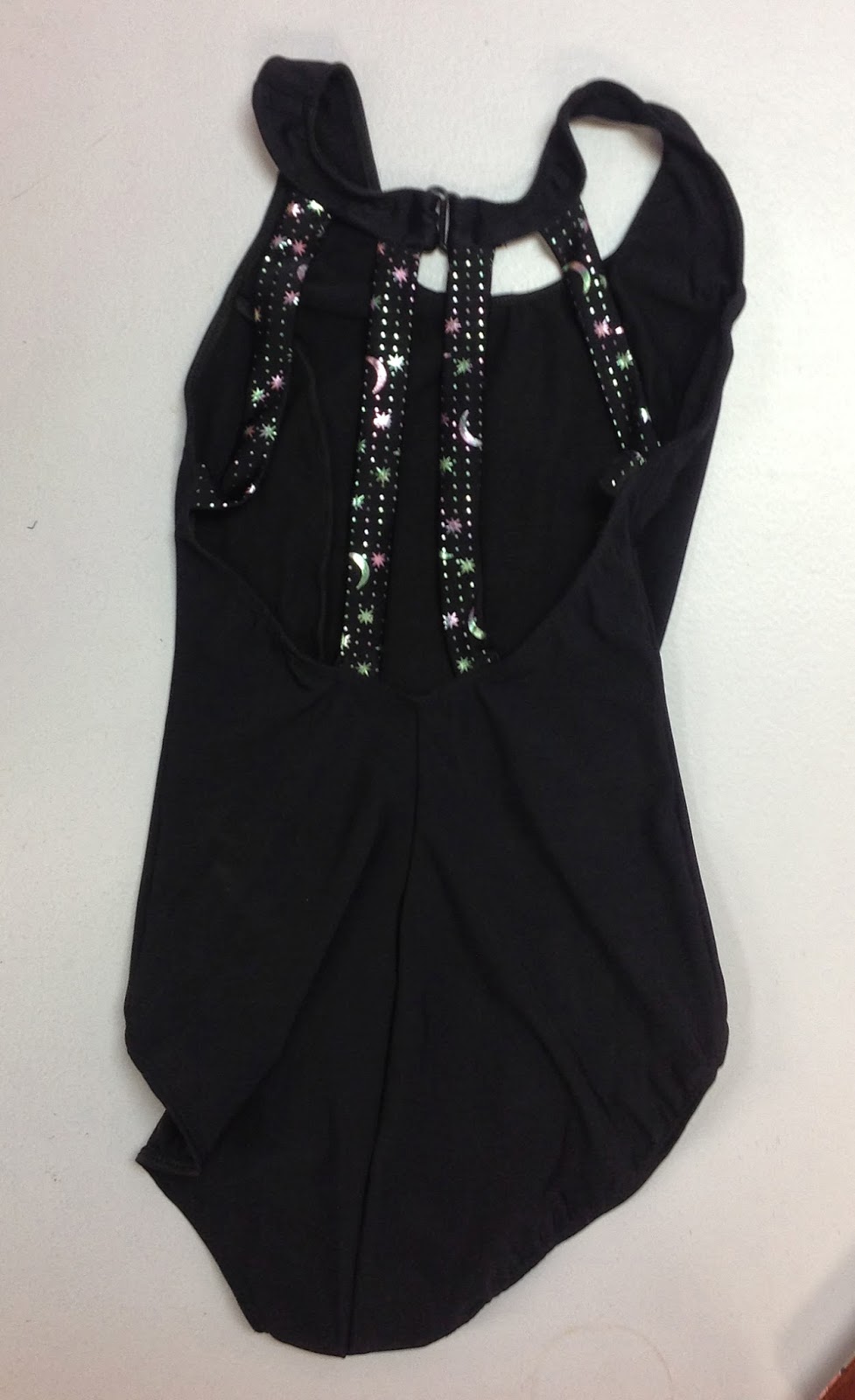 Plus, she made this tankini for her mom. She used black banding to finish the neckline and armholes. She is definitely drawn to the princess seaming, isn’t she? 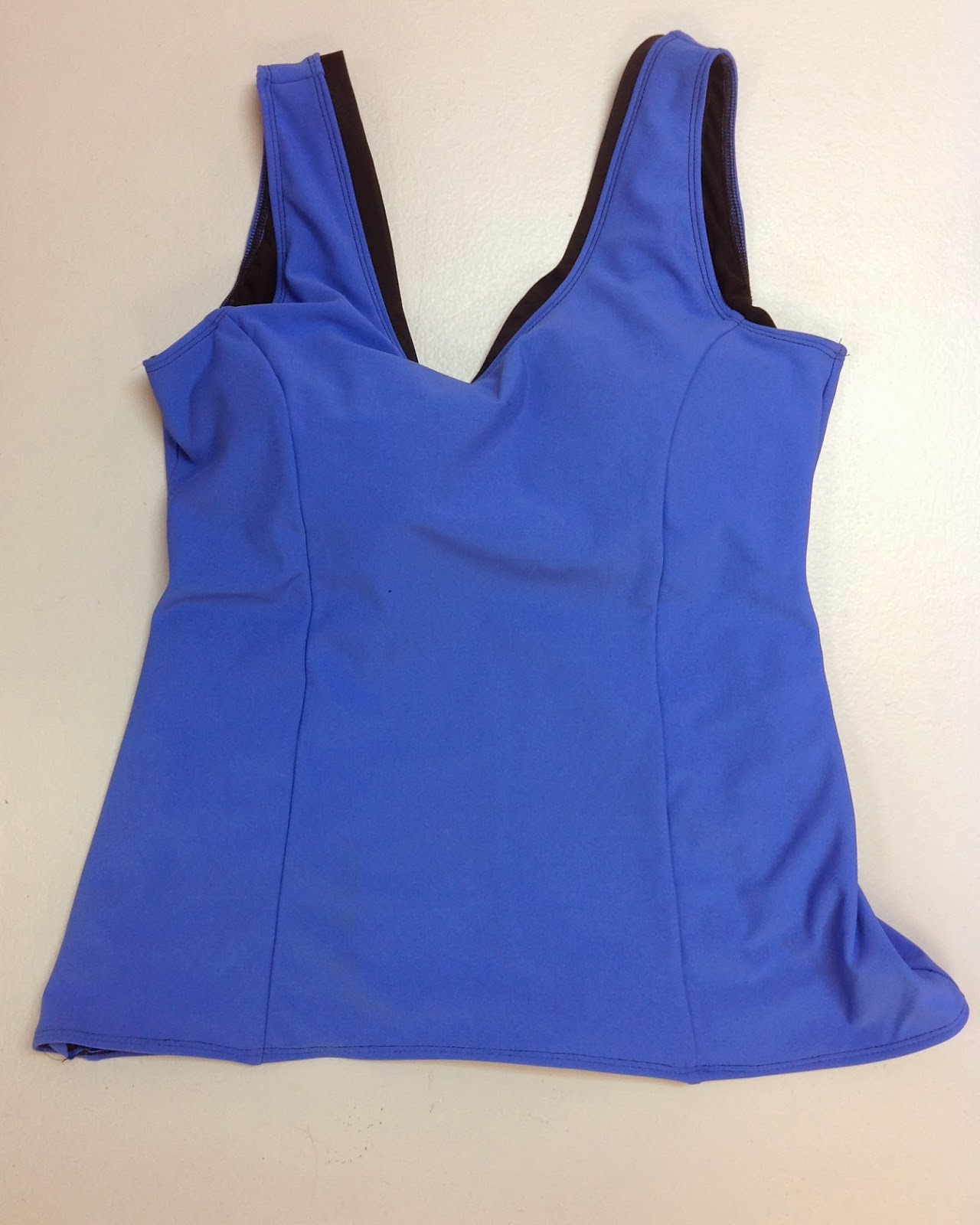 For Naomi’s new challenge, she made a retro suit with bra cups visible on the outside. Some call this a Bombshell suit, but I just call it Retro. Look at the piping detail! Naomi changed the seaming on her bra cups to line up perfectly with the princess seams. Gosh, I love polka dots! 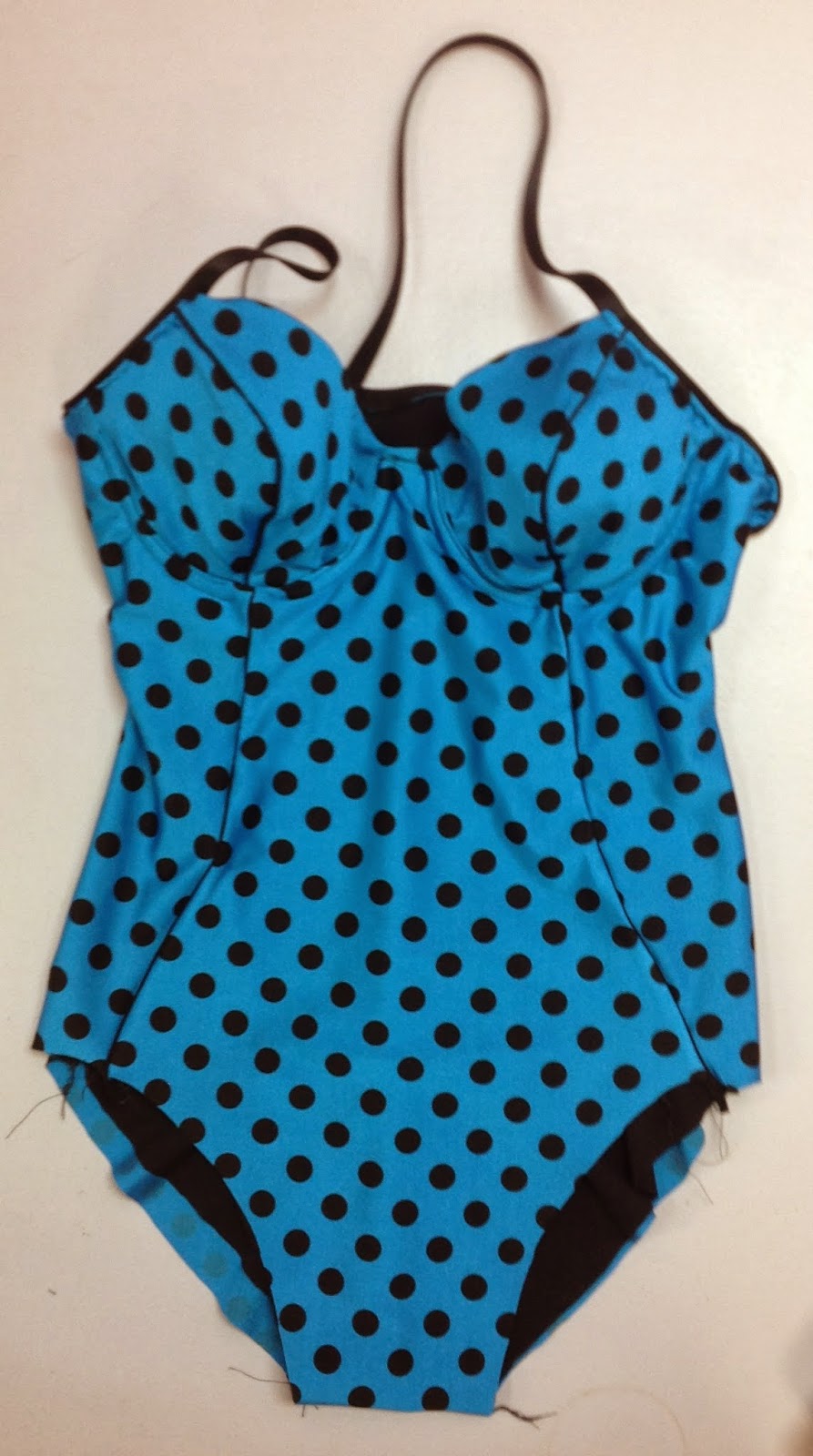 For Naomi’s final project in Swim Masters, she made a balconette bikini. She had to draft the frame for the cups and she certainly did a great job on this pullover bikini! Meanwhile, Erin wanted to play with separators, and after making a sample so she knew what to do, she went on to start this great bandeau top. This is a solid neon colour bandeau.  It’s not done yet, but she is off to a great start. The separator is in, and the frame underneath is made up. She just needs to drape the fabric over the cups. Honestly, this was a very challenging project, and the picture does not do it justice at all. it really does look amazing! 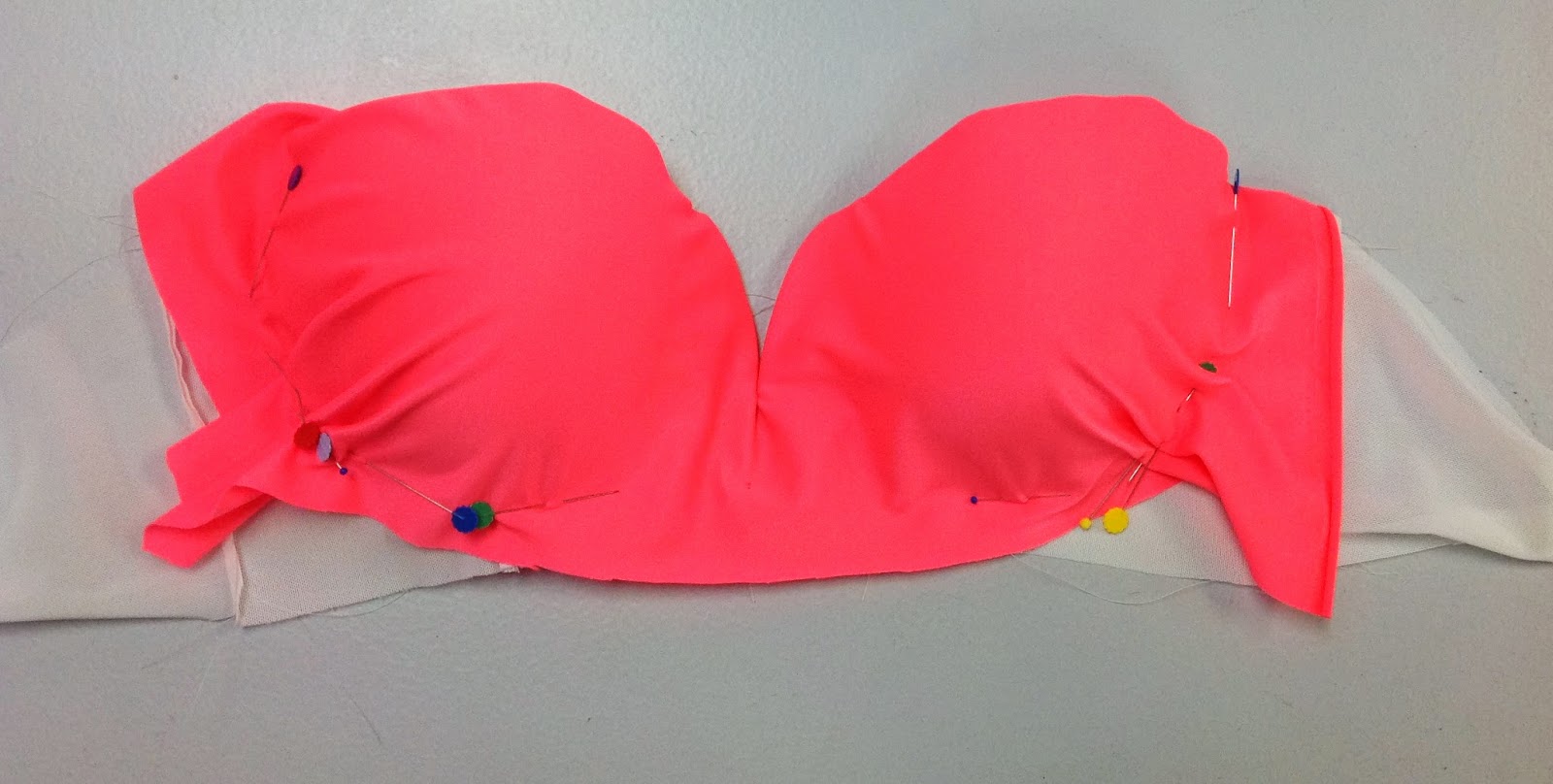 Lizzie was busy too, making a longline bustier style two-piece suit. She made cut-and-sew cups from foam, and covered them with the fabric. She added colour blocking and high waisted bottoms to go with the top. 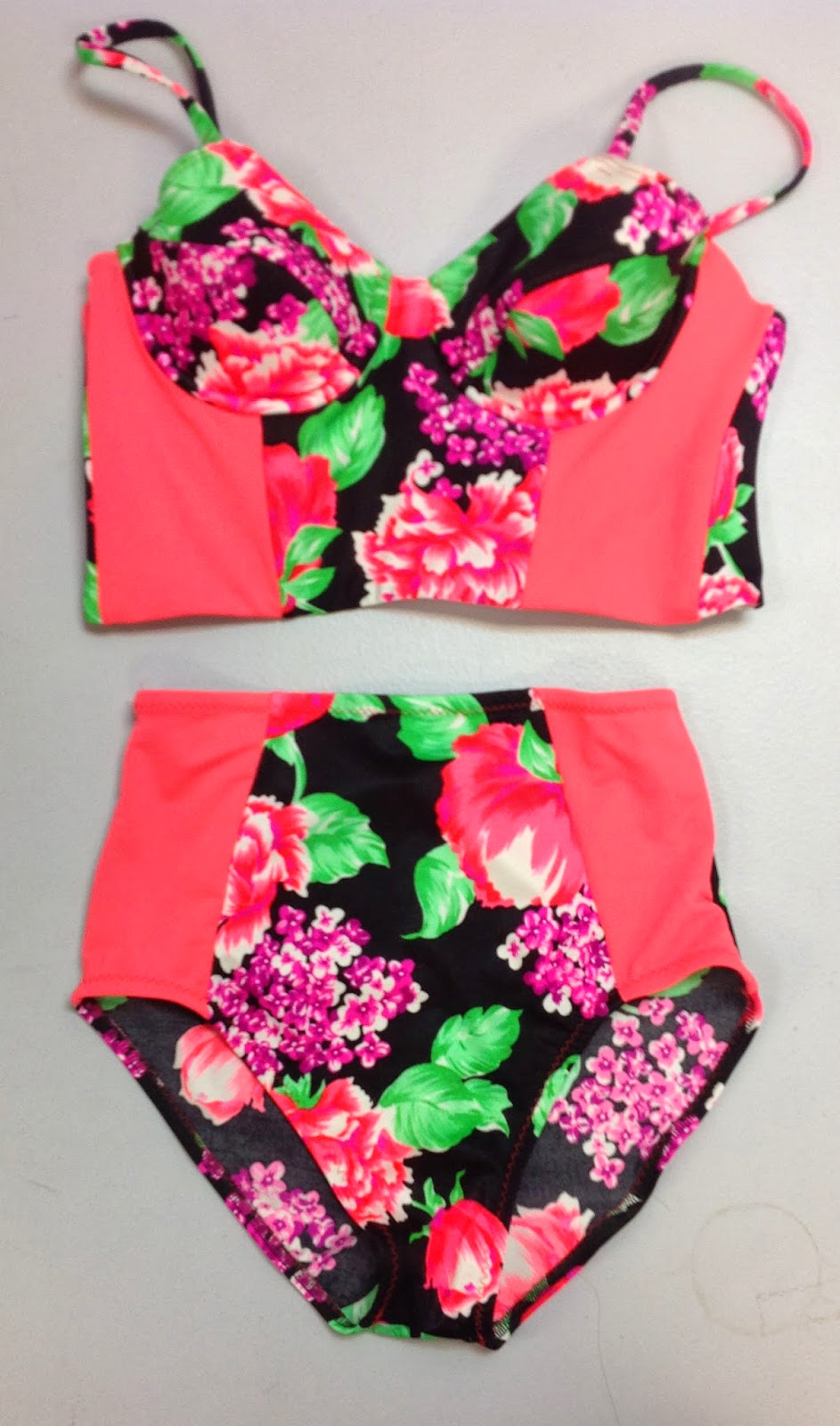 Here is the back of the same suit. There is boning all though  the front as well as the section at the elastics, to keep the elastics from collapsing. The three elastics all come together into a clicker at the centre back. 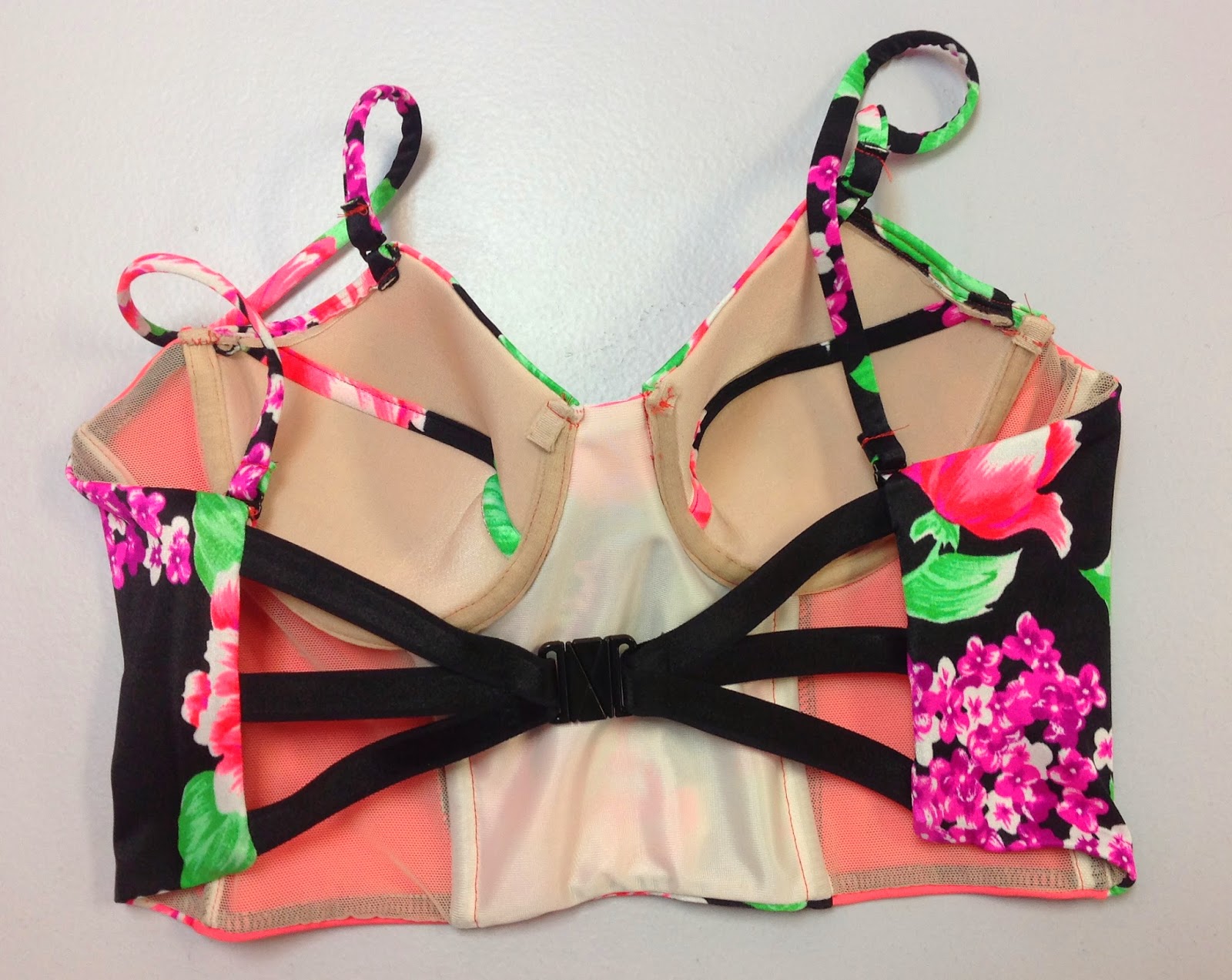 For Lizzie’s final suit, she fussy-cut this great fabric to make a Retro suit with bra cups. She still has to put the straps on it, but she agreed to model this for us! I love the Digital fashion show – we can see work in progress as well as finished suits from Swim masters week! 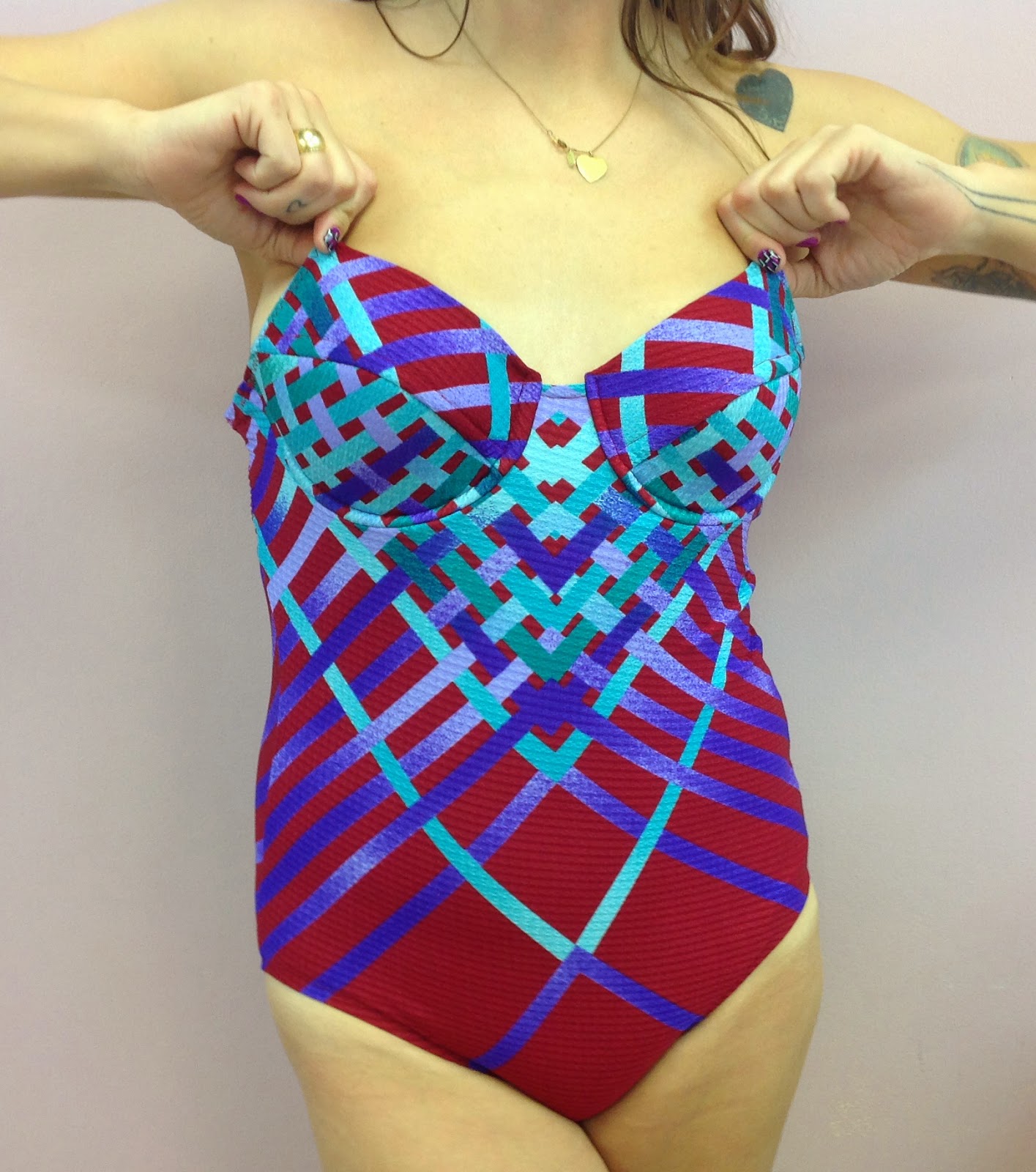 Holly cloned her  favourite tank top. While not “technically” a swim suit, it was made of spandex fabric and it DID have a bra built inside. Not a great bra but a bra nonetheless. By using her own bra pattern inside, she was able to made the original much better. She wanted to colour match the inside bra to the outside fabric! We did the fitting and she will finish this at her leisure. 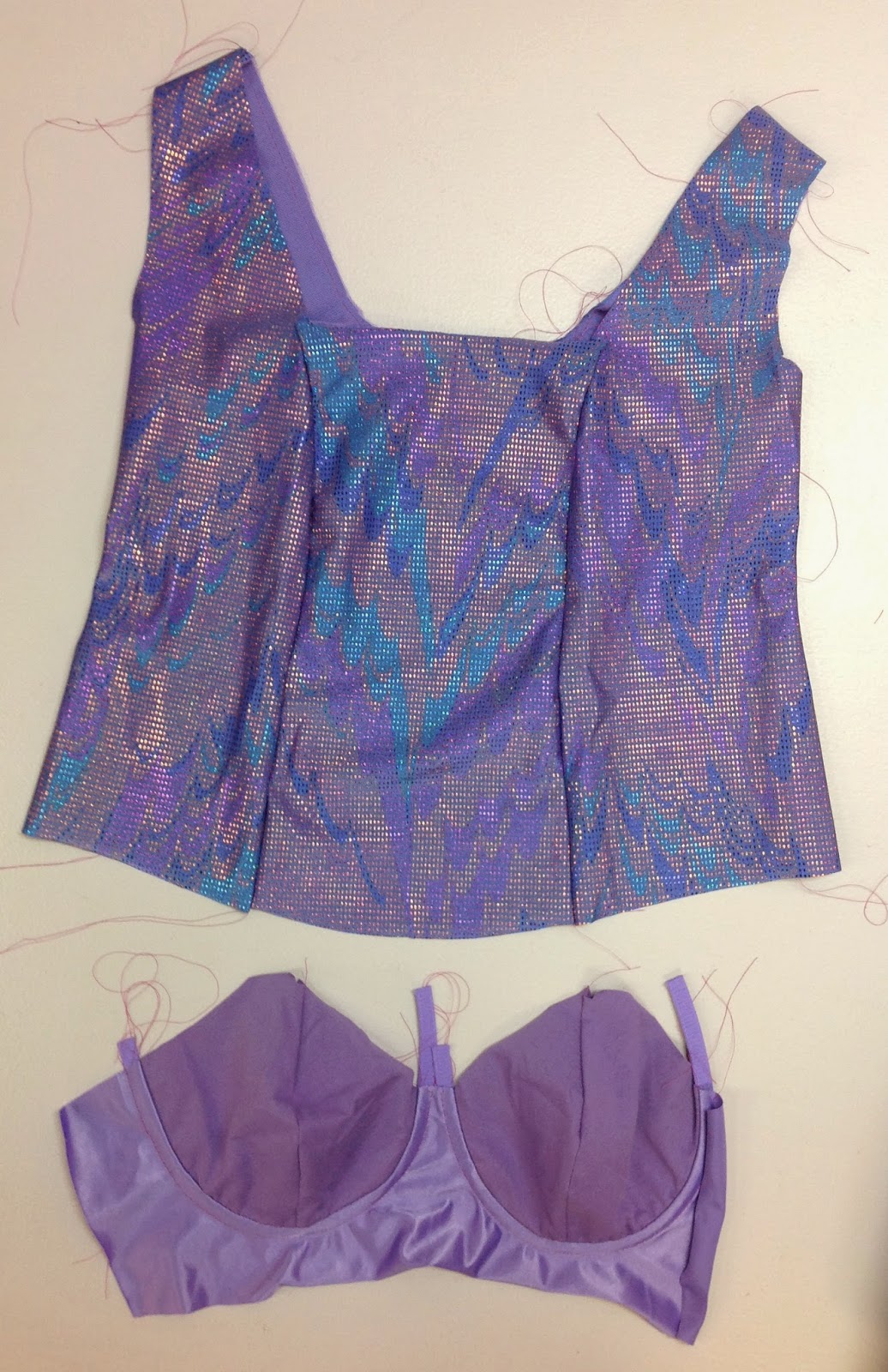 Last but not least, I will show you the back of the project Holly was working on. It is a suit that was inspired by a Roman Toga, and the detail is in the back. This was a monumental challenge as there is a built-in free-floating bra, plus those draped panels had to be arranged  and pinned in place, and the suit taken apart on several occasions to make sure all was well. 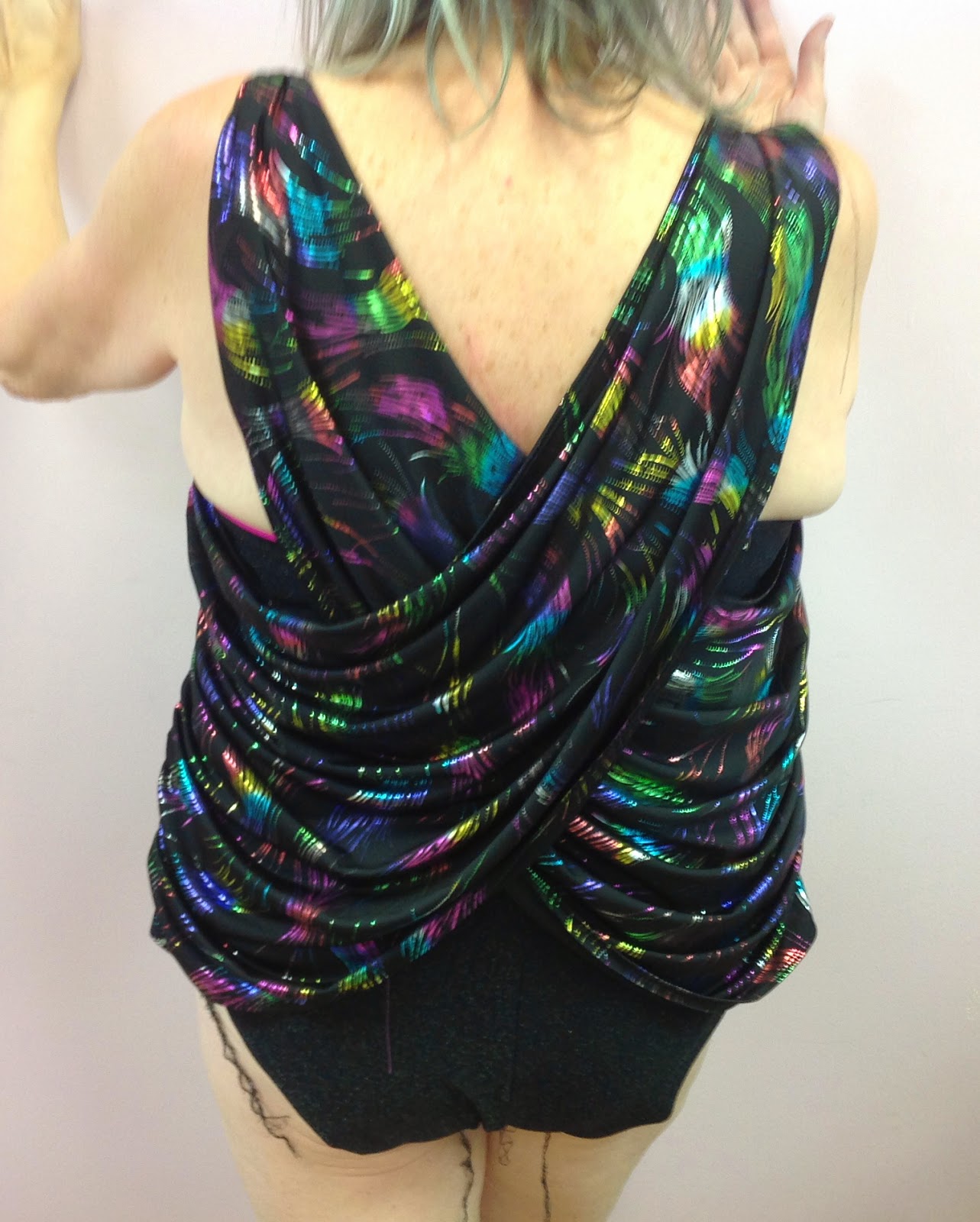 These four students made some wonderful suits during Swim Masters week, but they also made new friendships and challenged their abilities along the way. They all came away from this course with the skills to tackle whatever swimsuits they choose to sew. As always, my students teach me along the way too. I hope you have enjoyed this Digital Fashion Show!

Can We Make a Seamless Swim Bra?

A little Sunshine through the Snow