You are here: Home1 / Life of A Fairy Bra Mother Blog2 / Behind the Seams3 / Foundation Garments4 / Once Upon a Time – 1934 Bra Advertisement

Woohoo! Look what I found – a genuine 1934 bra advertisement – a full page ad from the Montgomery Ward catalogue! (We would call it an “ad” today but our short word comes from the longer word “advertisement”) You can see here what typical undergarments for the contemporary woman looked like. Brassieres (bra), girdles (shaping below the waist) and corselets (bra and girdle in one) were fairly new developments at that time. The word “bra” didn’t really come into use until the 1960s. Until then, we used the word brassiere, or in the 50s, the word “brazz” came into use.
You can see that most the “brassieres” on this page had darts for shaping – only one used horizontal seaming.  One uses tucks at the front. They all used hooks and eyes – no zippers. Even though zippers had been invented, they were’t popular in girdles and corselets as the teeth were still made of metal. The lady of that time did not get dressed in a hurry – these undergarments took time to put on and arrange properly.
Notice too that the sizing wasn’t like ours today. The sizes in this 1934 bra advertisement says the sizing runs in even measures from a 32″ to 42″ bust, showing that at this time, there wasn’t any bra cup sizing. They were just measuring around the body, and not concerned with whether or not the cups actually covered the whole breast. 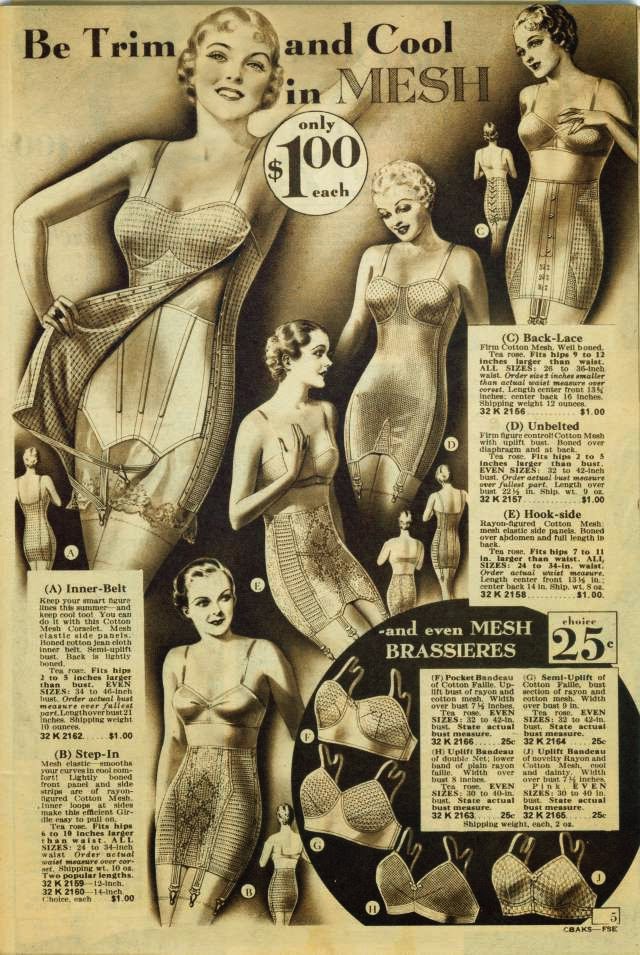 The fabrics are mostly described as “sturdy cotton faille” and all are boned. Two of them are made of Rayon, which would have been a very new fabric at this time. I am actually surprised that these were offered in colours – tea rose and pink. Don’t think I am complaining – I love pink!