Last night, the teachers and students “conspired” to take me to the famous Night Market. This is a market that only starts up at 6 pm and carries on until midnight, each night.

It is a very popular place for locals and tourists alike, and I can see why. With a carnival atmosphere, throngs of people, shops and stalls selling everything from jeweled shoes to medicinal herbs, this place has something for even the jaded shopper.
This is the street in front of the market. You can already see the taxis and cars and buses starting to line up. But behind this reasonably organized exterior is the heart of the madness and fun! 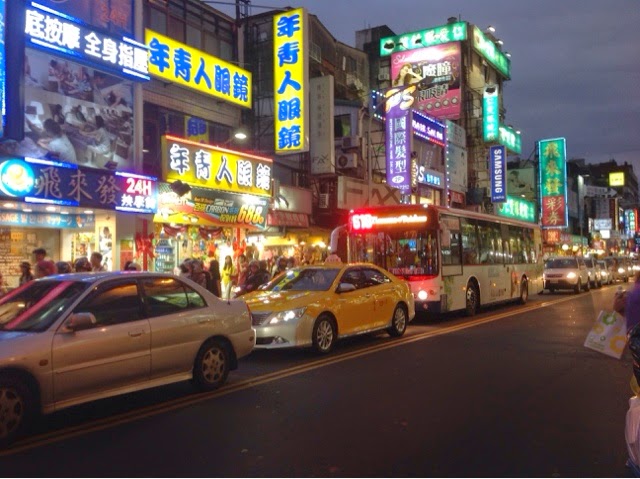 There were 4 students along for the fun – Irene, Agneta, Cindy, Yuti. I have to say, this was the perfect group to go with, they were so fun and wanting me to experience the market in all it’s glory.
First on the agenda…food! To be honest, it was never off the agenda for the rest of the evening! I had a fried chicken Taiwan style, which was a chicken breast flattened to the size of a shoe! This chicken is spiced and fried but super moist. Did I take a picture? <hangs head in shame> I ate it before I thought of the IPad in my knapsack! Oh yes, and a spiced garlic sausage to go with it!
They also have what can only be called a sweet potato puff ball. I don’t remember the name! But they make a dough from sweet potato and when they fry the small balls of dough, the whole thing puffs up into a ball about the size of a walnut shell. But it is empty inside! Just a shell of sweet potato goodness! What happened to the dough? That’s a mystery not meant to be solved!
I also had a drink that was orange juice and lemon mixed, no sugar, just juice. Oh, the Taiwanese are fond of their juices! This honey and lemon was the perfect blend of sweet and tart, just enough lemon to take the too-sweet out of the orange.
One of the things they do here is called shrimping. It’s like fish pond at the carnival, except these are real shrimp. You hook them and then they cook them. It is very popular with the men here! 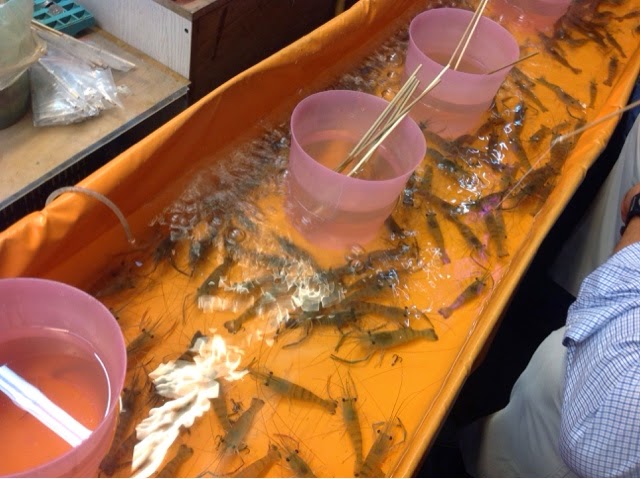 There were tons of arcade games too, from pin ball to balloon darts and a shooting range. Don’t worry, it was all air guns and balloons. I broke two balloons but Cindy was the big winner with 3 balloons burst. She won a dragon key chain!
Here’s a typical night market treat. 4 or 5 pieces of fresh fruit on a skewer , dipped in some kind of glaze. Strawberries, tomatoes and cherries are shown here. I had to have a picture of this! 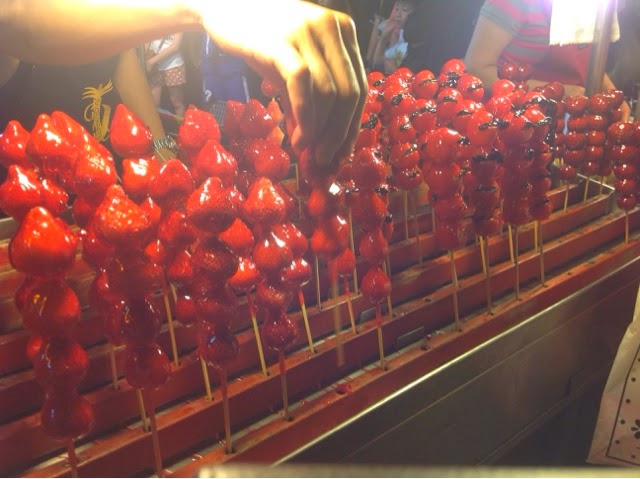 Then I spotted something I recognized from our Ottawa Street Food Fest (Sew Hungry) – the twisted potato or hurricanes as some are called. I can’t believe these students had never tried these! We all got one. Here’s Cindy and her wasabi spice potato, or what is left of it when I took the picture. Yuti’s is on the right- he had already scarfed his sea salt creation down! 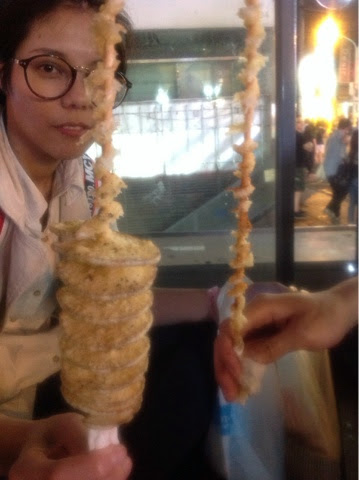 To the teachers at the university who orchestrated this – a big bow of appreciation! To the students who made this a magical night – my heartful thanks to all of you! I can see why Taiwan is such a magical place!