You are here: Home1 / Life of A Fairy Bra Mother Blog2 / Behind the Seams3 / Mastectomy4 / Rant of the week – Men Buy Better Breasts

I am on a rant today. I have a student in my Boob Camp this week who has had a mastectomy, and she cannot afford to buy a prosthesis. What’s a prosthesis? Commonly known as a breast form, a breast prosthesis is generally worn by women who have had a mastectomy (a breast removed often due to cancer). Once the breast is removed, the chest wall is more or less flat but sometimes not at all flat with scarring and folds of flesh. The breast form fills the space in a bra cup where the breast used to be. This is a “better” breasts form – a triangular blob of silicone quite unlike a female breast. By the way, this is a brand name prosthesis that costs $400 in Canada. Our government will kick in $200 toward that cost, but only once every few years. Maybe you have insurance to cover the cost but a lot of women don’t. 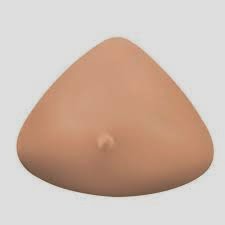 The prosthesis comes in 10 or 11 “standard sizes” (you know how I hate that term!) which really means it won’t fit anyone very small or very large.  It does not affix to the chest wall – it does not “strap on”, glue on, nor it is permanently attached to the chest (as some misguided folks believe). In fact, as far as a prostheses go, it is the only one that is NOT custom made to the individual. Breast forms can be sold by bra shops, retailers and in drugstores. Can you imagine getting a prosthetic arm or leg “off the shelf” in the drugstore?

OK, so I have established that the forms are stock sizes, but in addition, the shapes and textures are unrealistic and grim. Most of them don’t even show an areola, which would at least show a bit of realism.

This one does show the areola but it is still more or less triangular. The uneven side is supposed to fill in the side of the breast if the lymph nodes have been removed. 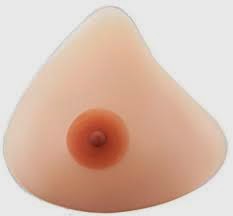 They are also very heavy. In fact, the manufacturers know this is a problem, so they came up with a lighter version, which they make of silicone that has had air whipped into it (much like whipped butter) You can see the lighter colour on the back side. It is about 30% lighter than the regular version. If you are sensitive to the heat or you live in a hot climate, you could find them very hot to wear. Once again, the manufacturers got on their thinking caps and came up with these clever additions for better breasts. These raised pebbles allow a bit of breathing room between the chest wall and the form. I guess that’s so the rivers of sweat can run unheeded down your tummy. 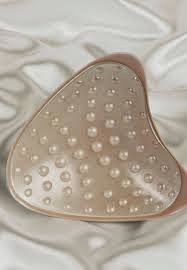 …and this pad which is supposed to soak up the moisture and can be changed as necessary. 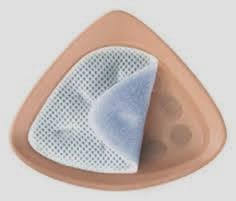 It seems like the choices are either
1. take it
or
2. leave it

Recently, I had someone donate a prosthesis to me so I could show the students. It was the nicest one I had ever seen (for a “stock” form). Nice shape, good weight, and a realistic areola. This one could be turned on its side if lymph node coverage was needed. It looked good inside a bra too. What’s the cost, you ask? Under $300 for the pair. Yes, FOR. THE. PAIR! 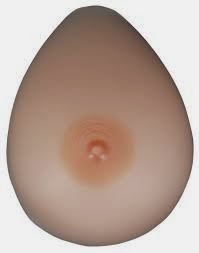 So where does this form come from? Believe it or not, this is a form sold for cross-dressers who want realistic and better breasts under the clothes they wear. Here’s the thing…men looked at what is available to women and and demanded better breasts!. The irony of this is cruel…men buy better breasts than women who need them.

They can put a man on the moon, but the breast form companies can’t make a breast that looks like a breast?  I don’t believe it for one minute! C’mon Amoena…step up to the plate and give us a better breast. We deserve it!

A Peek Inside a Mastectomy Bra
10 replies

A Better, Wider Bra Back

Foam Cup Pockets? – Yes, you can!
Scroll to top
Create a new list