Boob Camp May 2014 was over yesterday, and while I wander around looking at empty spaces where these wonderful ladies worked so industriously last week, I know they have all gone home with some great new bras, plus all the knowledge they learned while they were with us for the 5 days. However, our Digital Fashion Show will serve as a memory of those wonderful students and what they sewed up while they were here!

Here are some of the bras they made, some modeled on a mannequin because not everyone wants to be photographed in their underwear! (I can’t imagine why!)

If you haven’t been to a Boob Camp before, the first bra you learn to make is the Classic Bra in white, which I won’t show here because it is…well, rather plain and white. But it does allow the students to learn all the techniques of sewing a bra and it allows me to modify my bra pattern to their unique body.

Once that first bra is out of the way, and we have perfected the fit, the second bra is usually a butterfly lace bra. You can see how it gets its name. 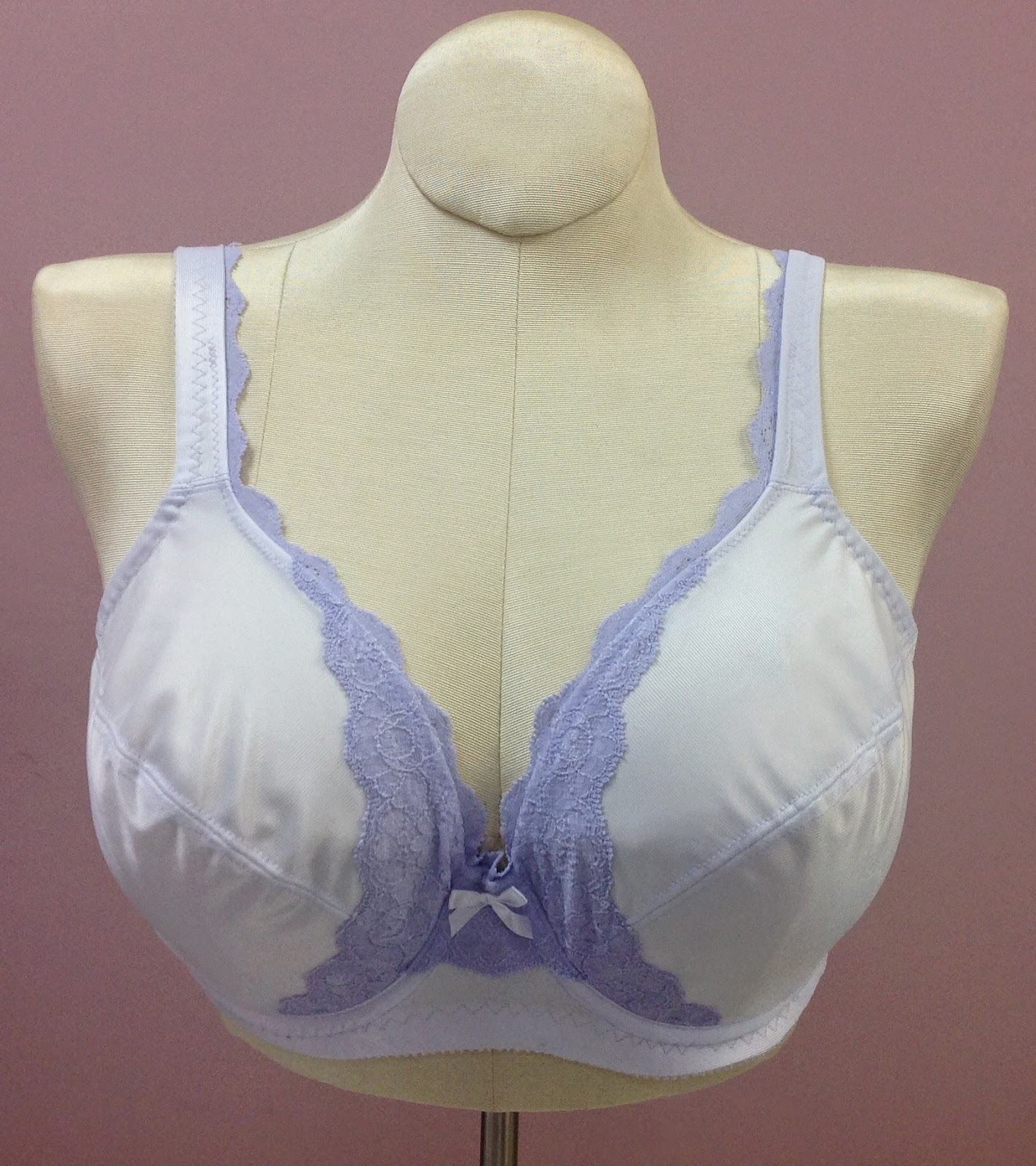 Here is a tropical butterfly using some of that new lace I got in a couple of weeks ago. 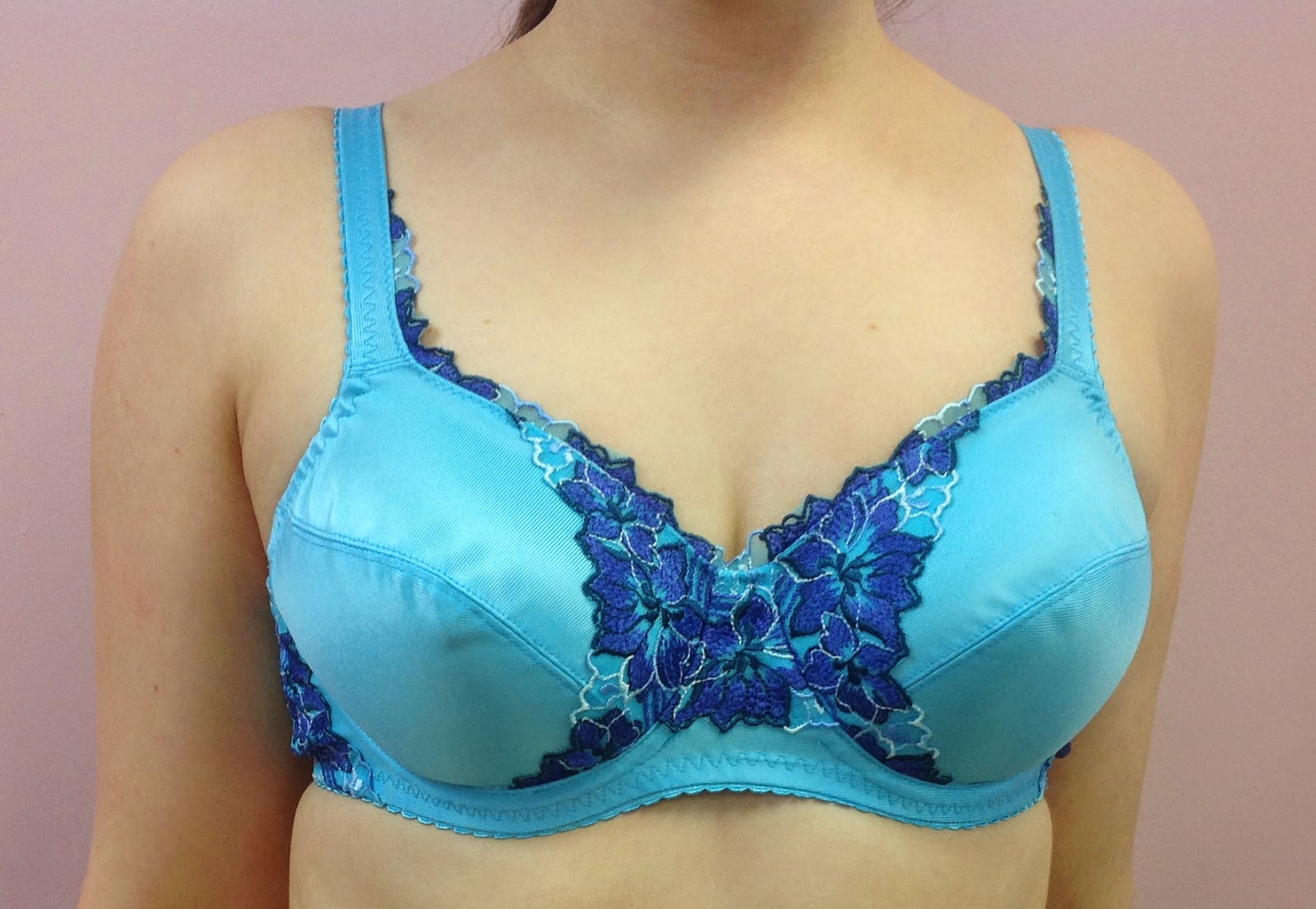 If a student comes to Boob Camp and they already know how to sew a bra, then they can jump in wherever they left off in a previous class and do whatever they want – they don’t have to do the basic white bra.
So here we have lace on the upper cup (but the bra is still white!) and the style of this bra has been changed to a partial band (see there is no band running under the cups) 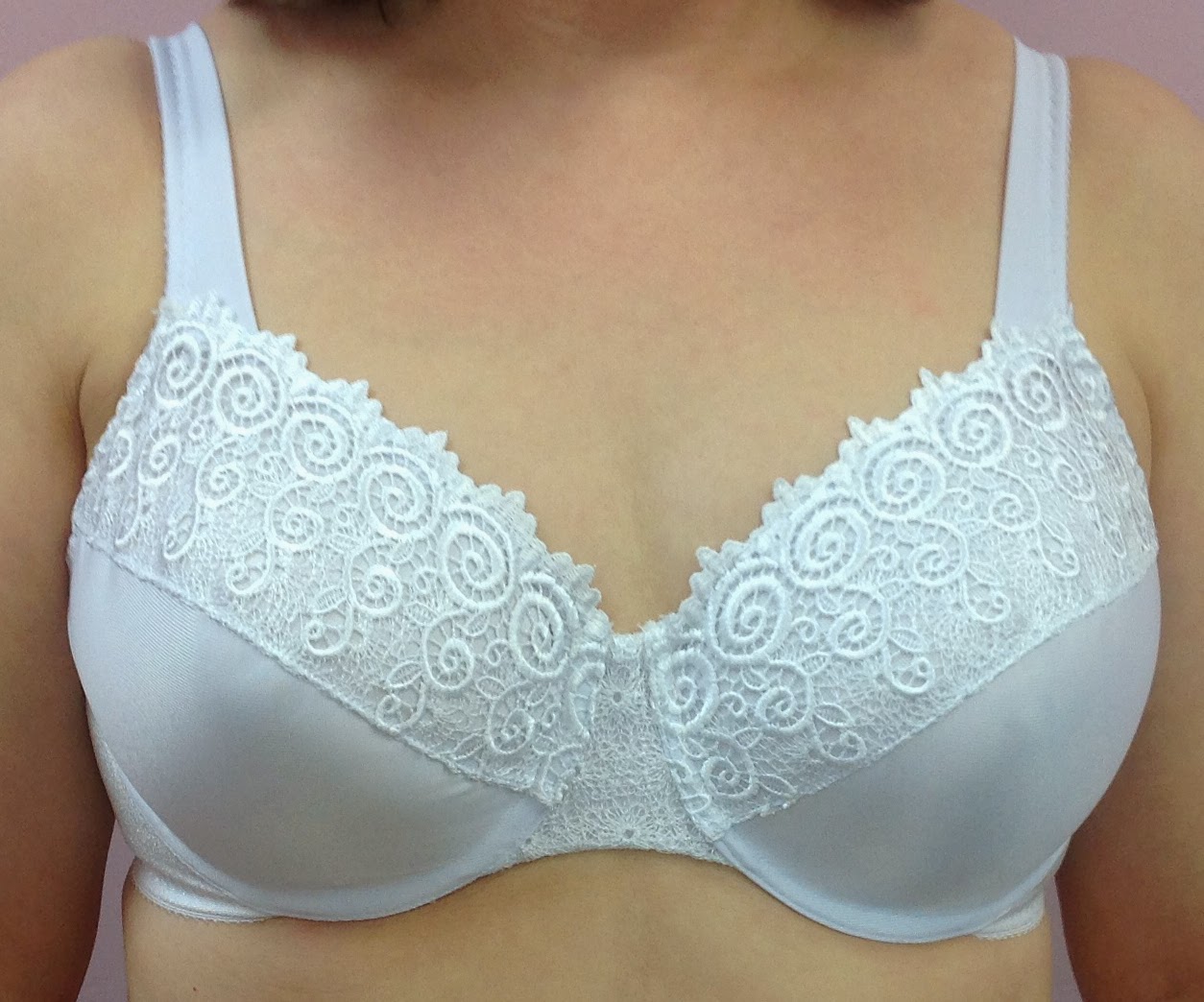 The next bra is almost always a Shelley bra, which has a split lower cup, a power bar on the side and a lace upper cup.
All the patterns are drafted from the Classic Bra pattern that was tweaked to fit, so the students learn drafting as well as construction and design. Here the Shelley uses lace over the lower cup as well. 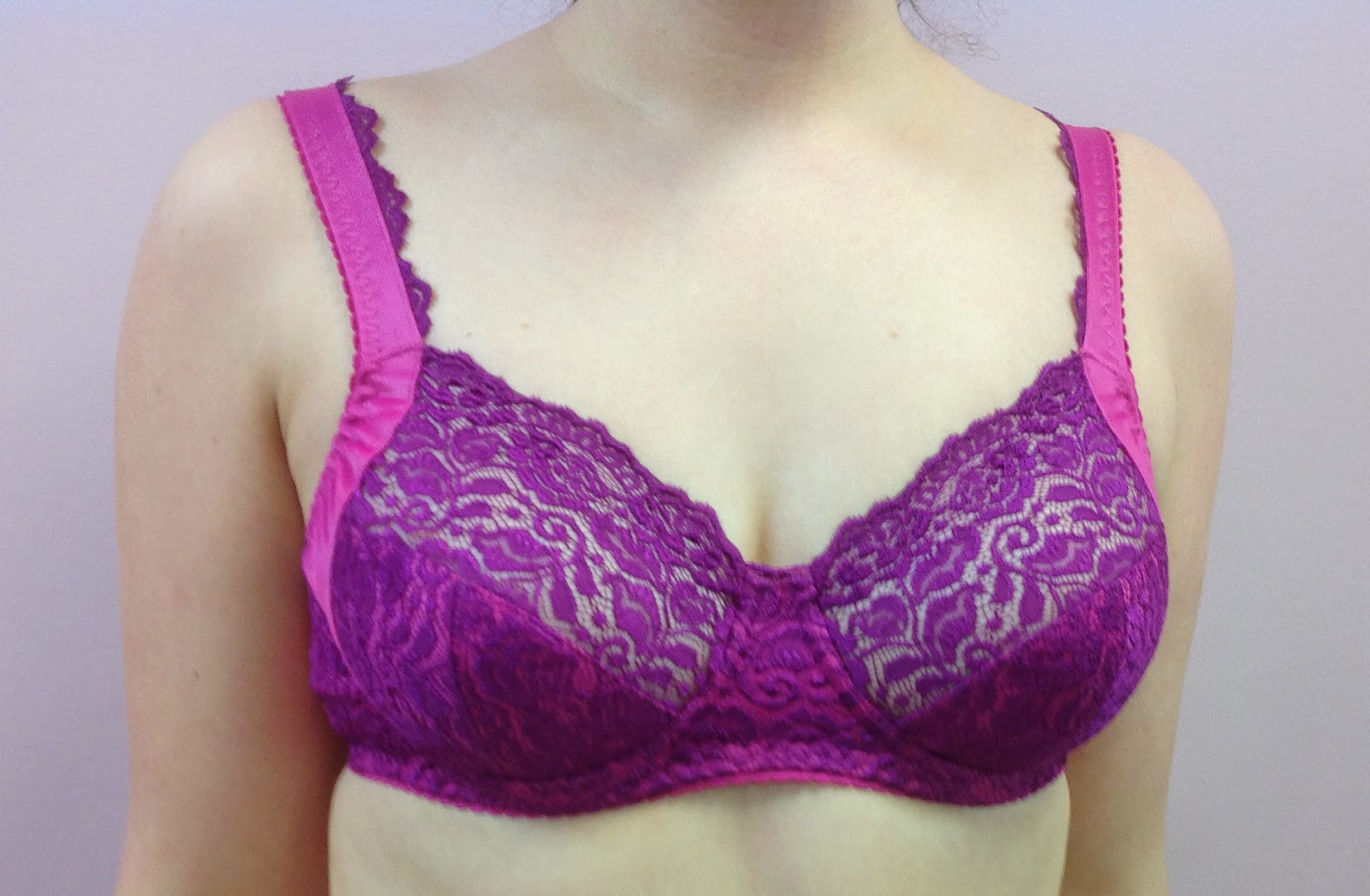 And here is one using a Gothic arch in the bottom centre of the bra bridge. You can also see a fabric layer running under the lace on the upper cup. The demi fabric is great for women who don’t want a completely open lace upper cup. (This was Marsha’s idea – just too clever, our Marsha!) A Shelley with white lace and purple duoplex 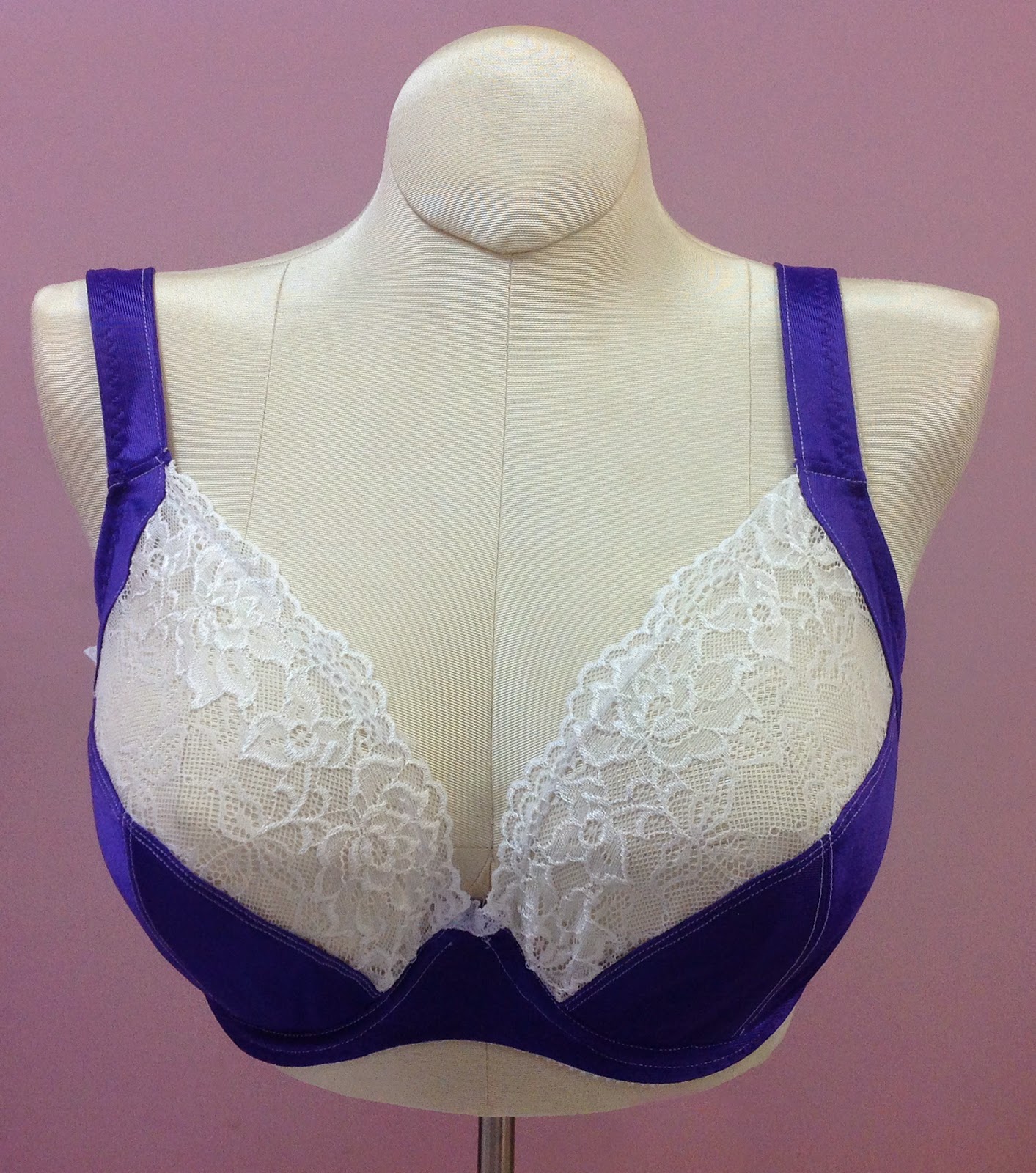 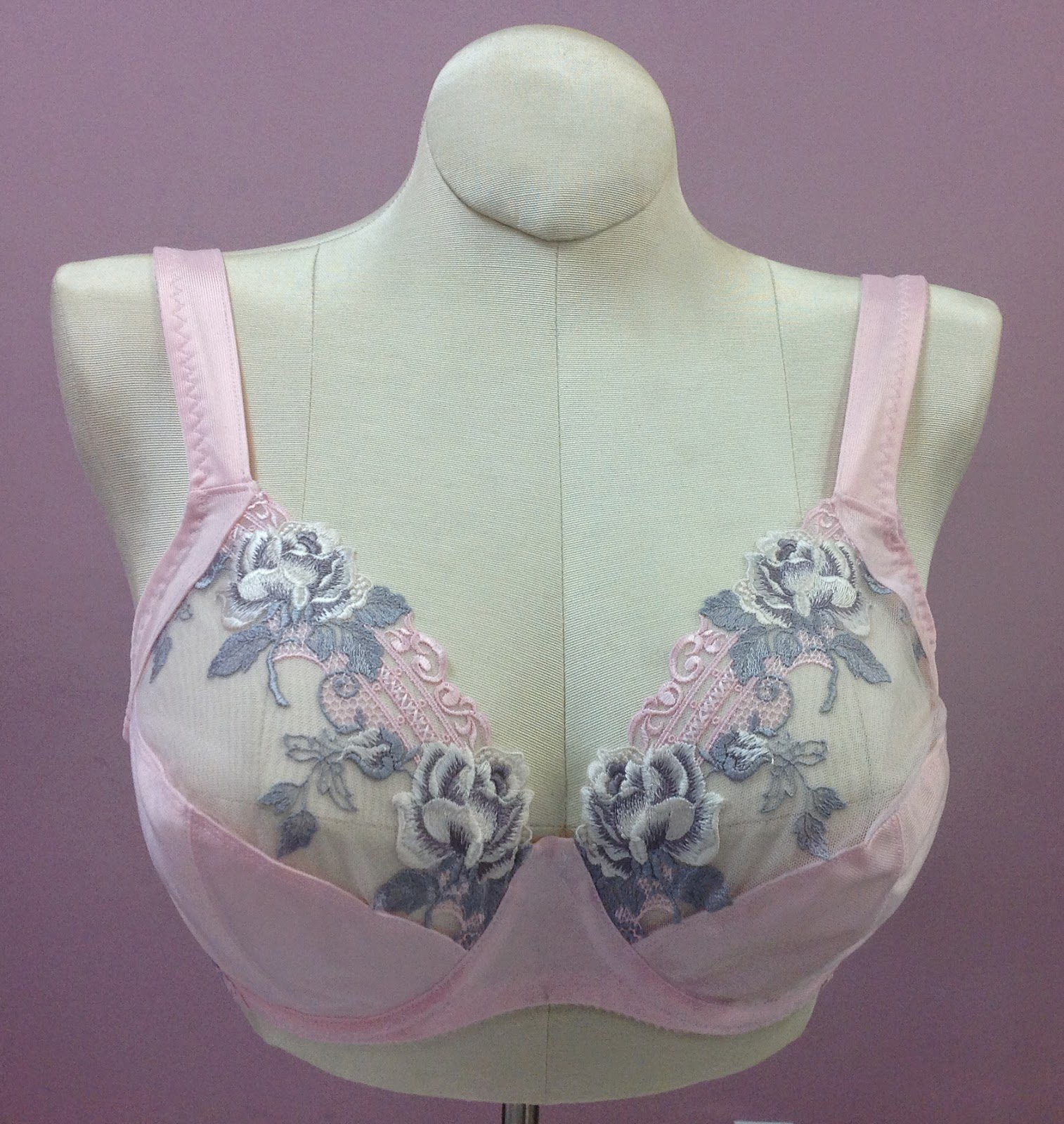 Here is the partial band again but with red piping edges and a print instead of lace on the upper cup. 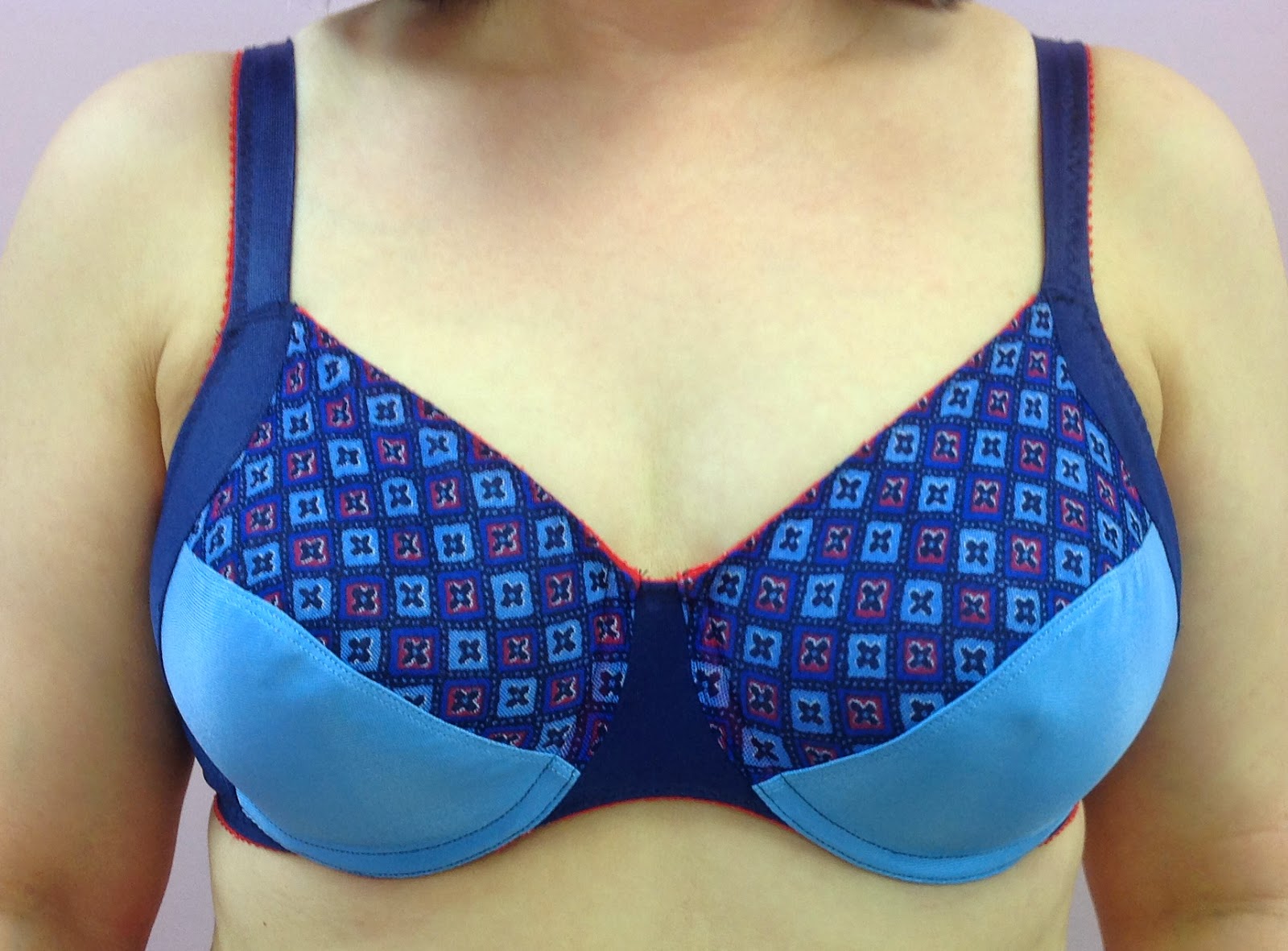 This one uses more of the new lace, and also the demi- liner behind it. That’s a good name for it…demi-liner. The top edge of the lace still shows skin behind it, but the liner makes the bra a little more modest. 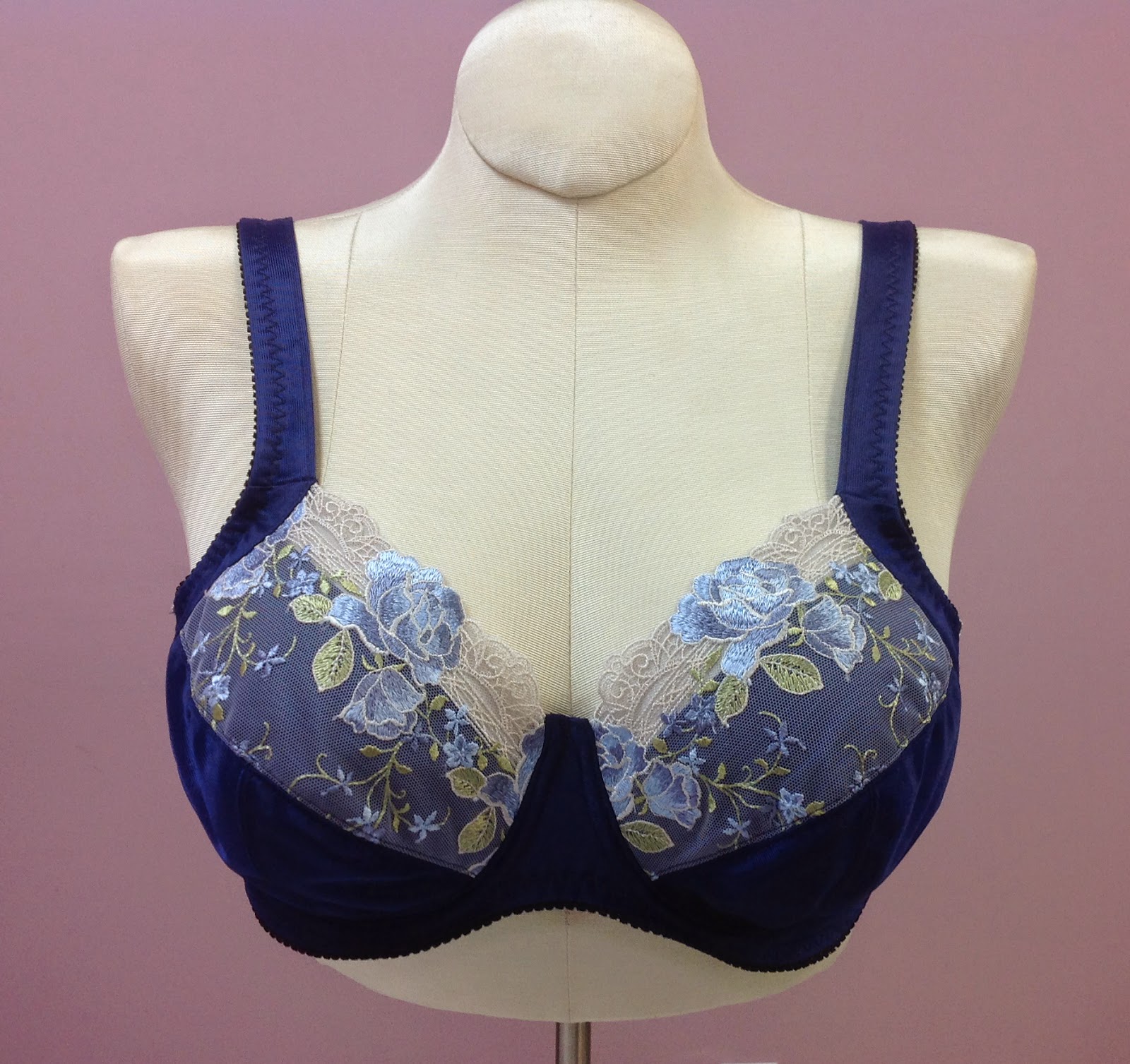 Here’s another with the demi-liner 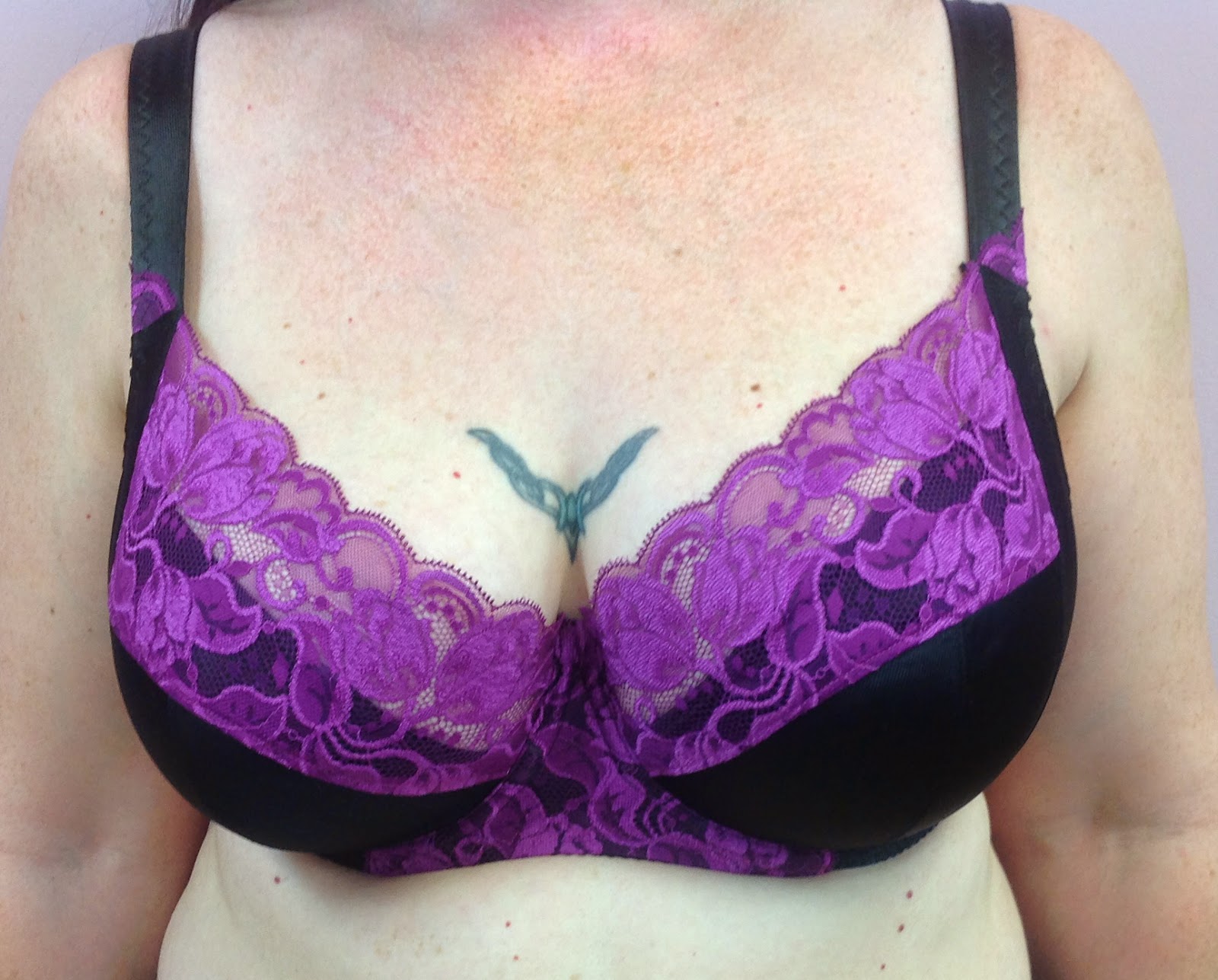 By the time the Shelleys are finished, students often feel confident enough to work with foam cups.
The MA style cups have a pattern already, which makes using those cups very easy, just cut and sew it up without any alterations. Here’s the Amanda sewn in turquoise lace. 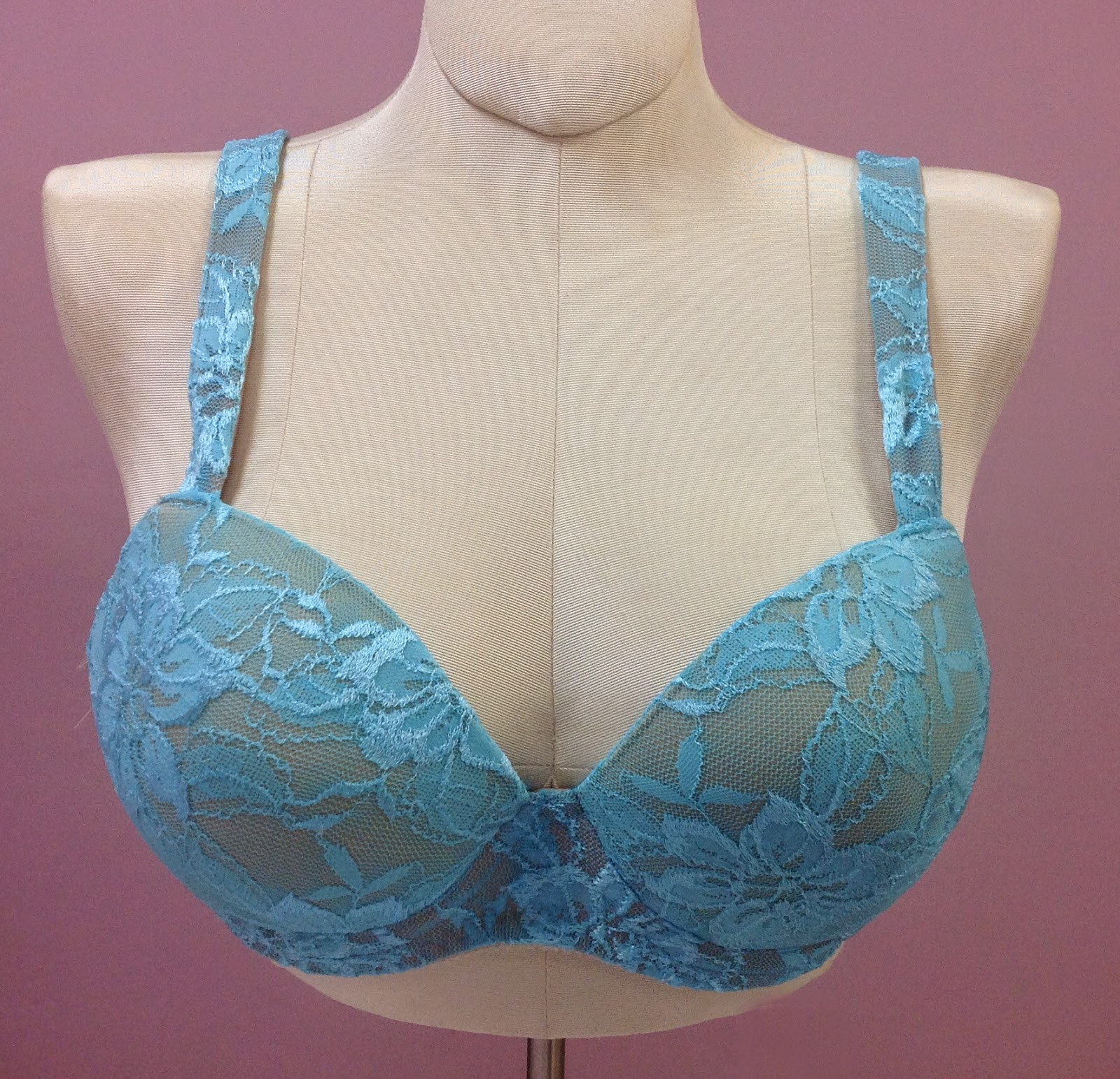 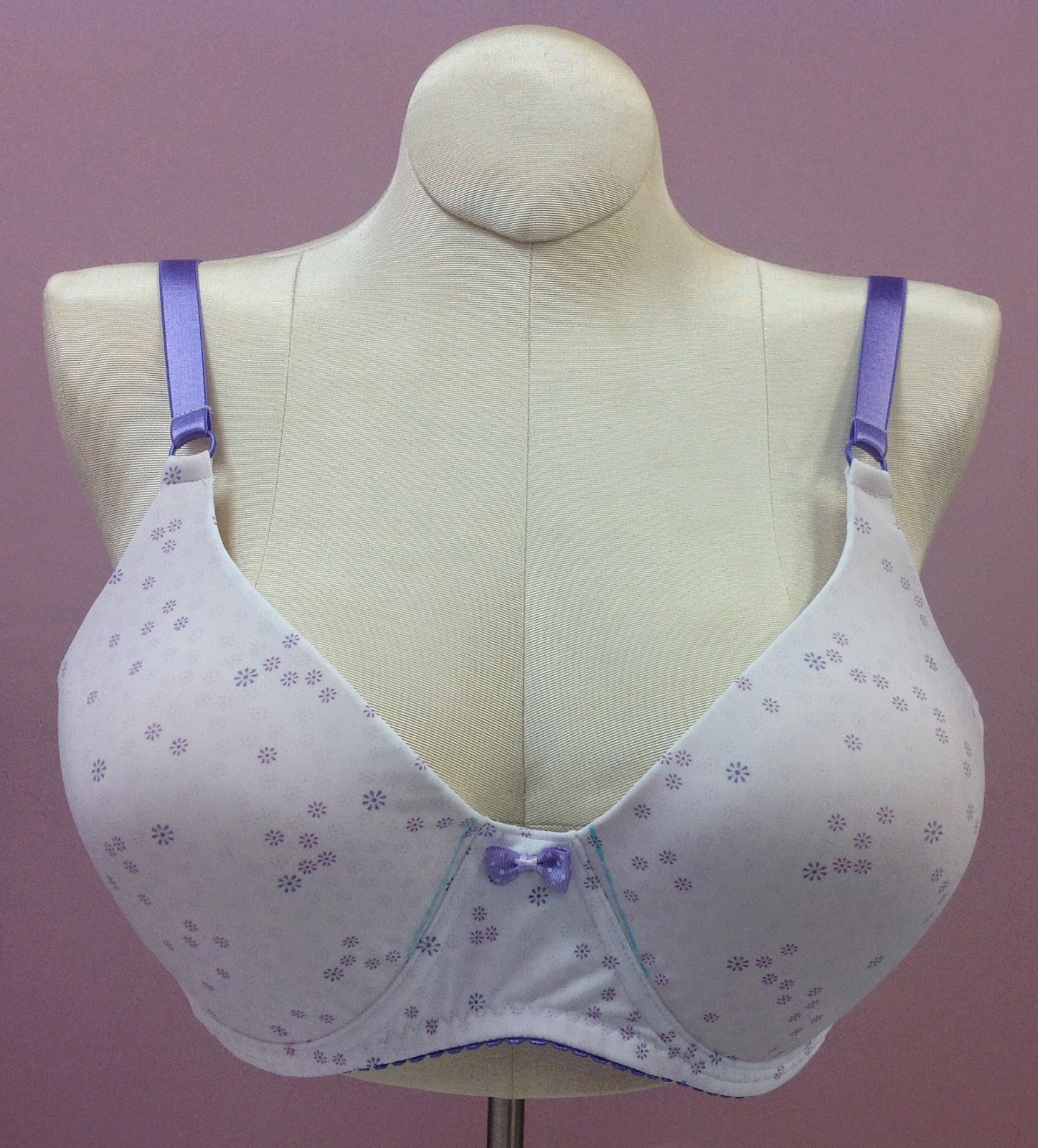 You can’t see them under this camisole style bra, but these are also the MH cups. The strap extensions are covered with the tiger lace. The camisole is made of chocolate brown Venice. 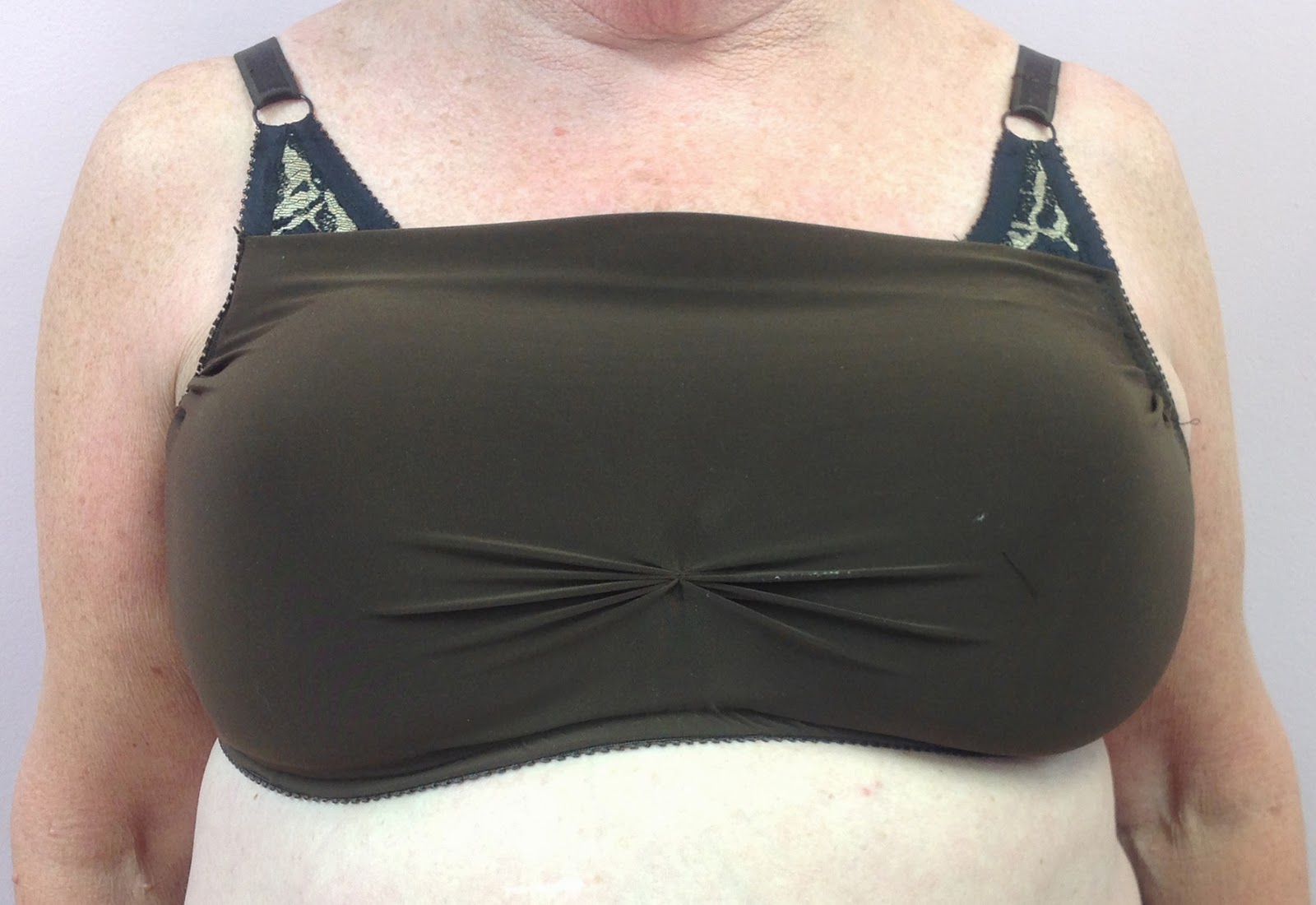 Of course, the strap extensions match the back of the bra, made from the same tiger stretch lace. 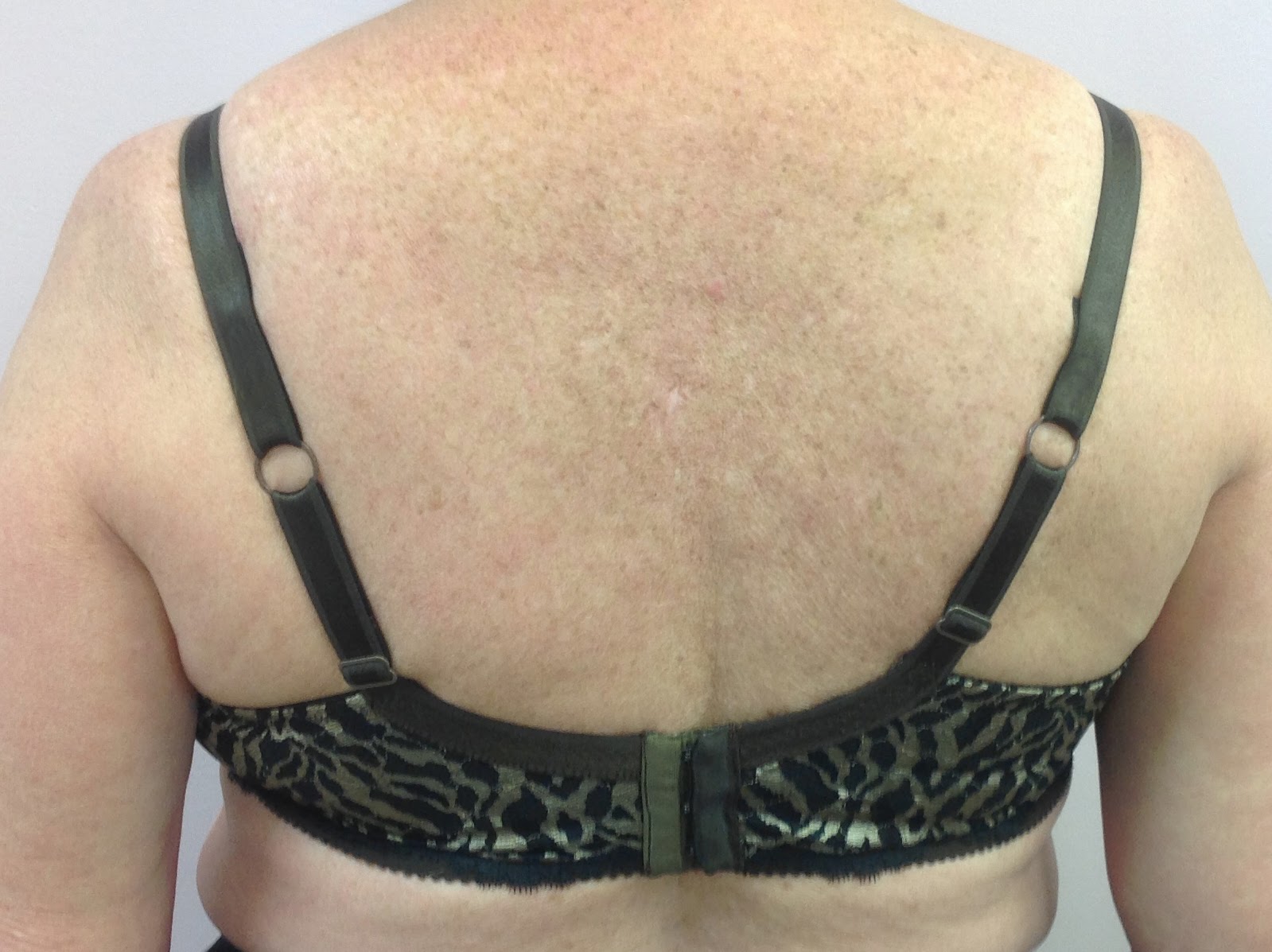 Here’s a bra made with the MB style, or Balconette cups. Once again, the student drafted the pattern for the frame and band. We always make a mock up for this sort of thing, cobble it together enough to try it on, and then go ahead with the real thing. 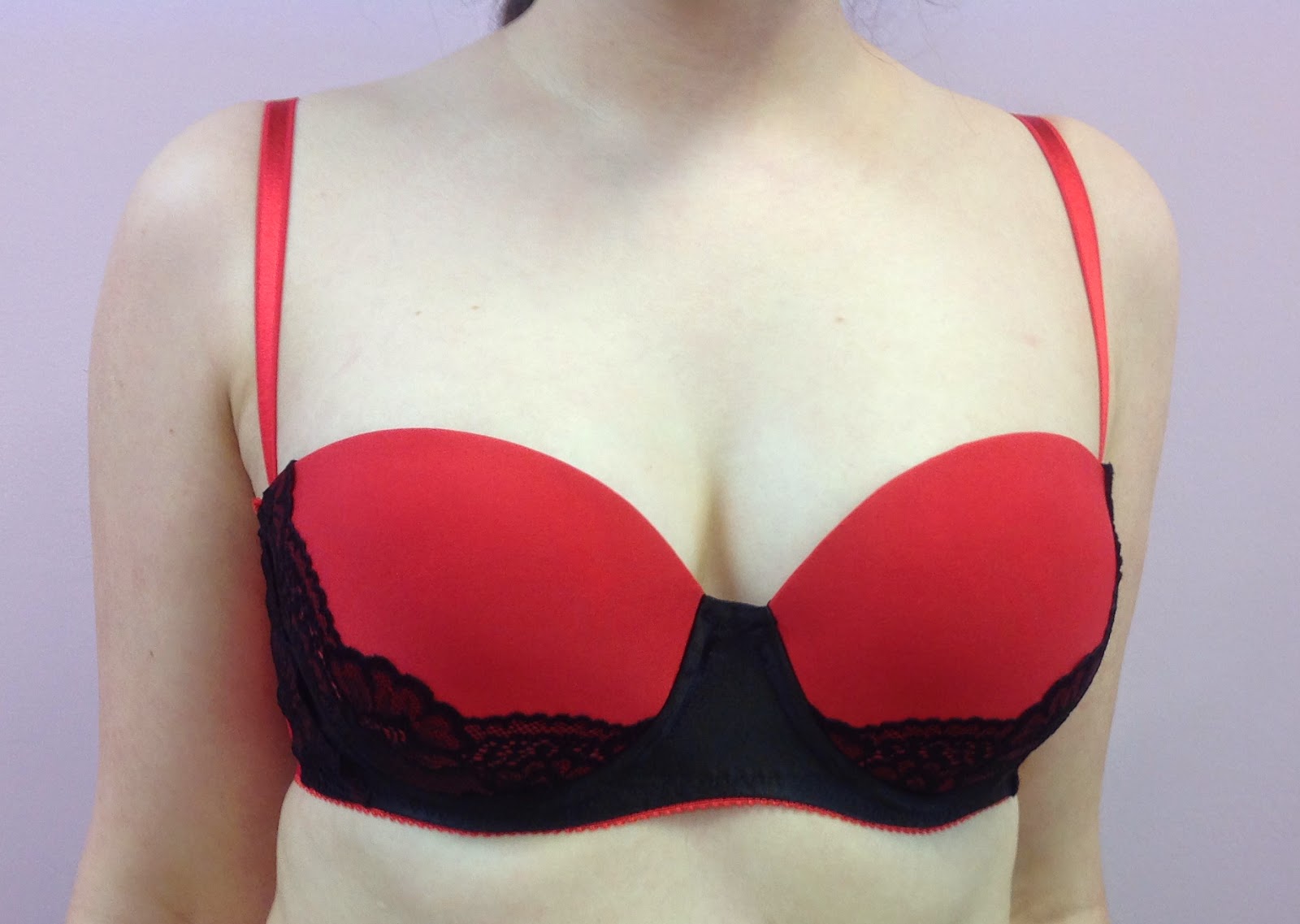 One student didn’t want the pre-formed foam cups, so she opted for changing the style line completely. She changed the Classic Bra into a Vertical seam bra, with Duoplex under lace on the outer cup and just lace on the inner cup. That lace is mirrored perfectly! 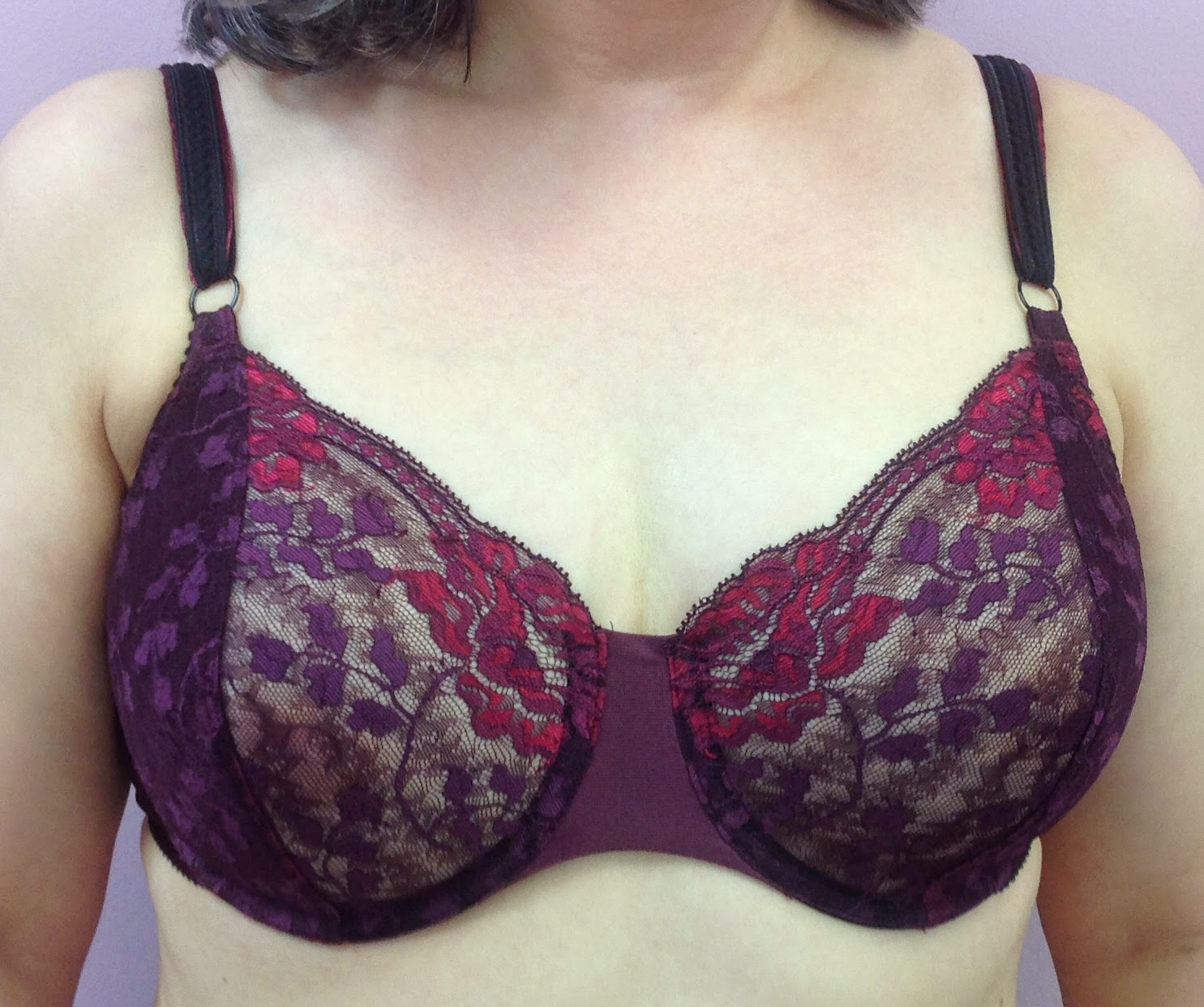 The back of the Classic bra was re-drafted a designer back, with the back split in two to use the lace edge. This particular back has wide set straps that hug the arm. Because the back is taller than a regular bra band near the side seam, it does not fall off the shoulders. It would be perfect for a low backed top. 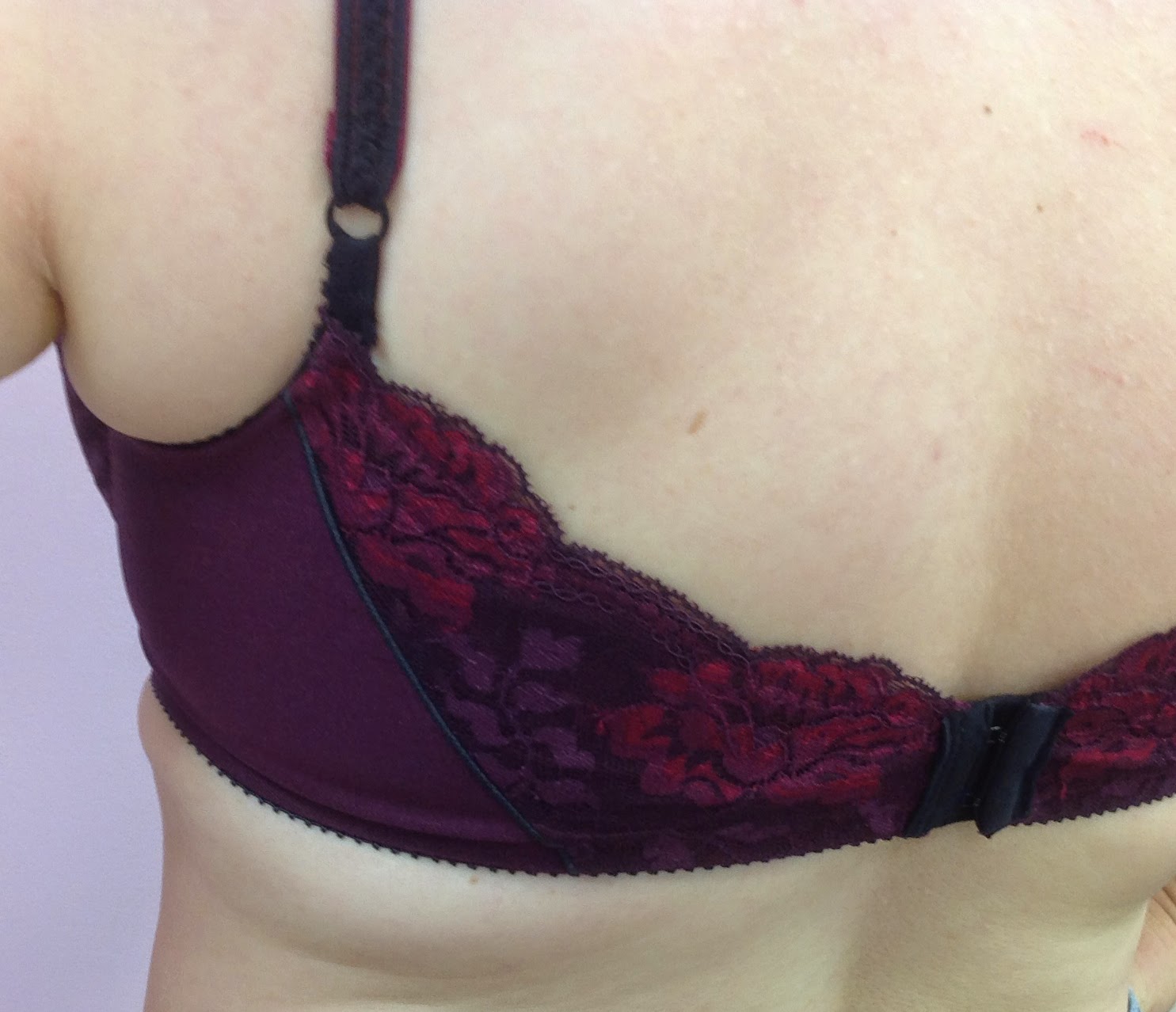 Another Boob Camp is over.The students this time came from far and wide  including British Columbia, Tennessee and California but also from Trenton, Whitby and Montreal. Only one was actually from Hamilton! Our next Boob Camp is not until July 14-18. Normally we have them every six weeks or so, but I will be teaching  bra-making and swimwear at the Saskatchewan Stitches Conference from May 28 until June 9. Then I will be teaching classes in Sweden from June 18 until July 6. Yes, I will be blogging and having a Digital Fashion Show from both places!
May 10, 2014/14 Comments/by Beverly Johnson
https://www.braandcorsetsupplies.com/wp-content/uploads/2014/05/Boob-Camp-May-2014-digital-fashion-show-feature.jpg 1242 1485 Beverly Johnson https://braandcorsetsupplies.com/wp-content/uploads/2017/01/BMS-Website-Logo.png Beverly Johnson2014-05-10 09:23:002016-08-01 12:57:58Boob Camp May 2014 Digital Fashion Show

Bra-making Contest – and the winner is…

Bust Out the Bras Bra-making Contest