If you have been reading this blog, you may remember that every year I go to the Saskatchewan Stitches Conference, which is held in a most unusual location – a monastery! Yes, a real monastery in downtown ( I am kidding!) Muenster, where the population doubles when the Conference is in town!

I have been teaching at the SSC (Saskatchewan Stitches Conference) since its very first year! Wendy Toye, the force behind the Conference, decided it was time to have somewhere for enthusiasts of the needle arts to gather and learn…not just for a day, but for a week! She delivered teachers in quilting, knitting, tatting, fabric embellishment, lace making, bear making and of course, bra-making to rural Saskatchewan.

I have a collection of photos that were taken at the Conference over the years. Some are quite hilarious! Here is a class in panty making in 2003. I only know it is a panty class from the drawing on the chalkboard! My hair is long and dark in 2003 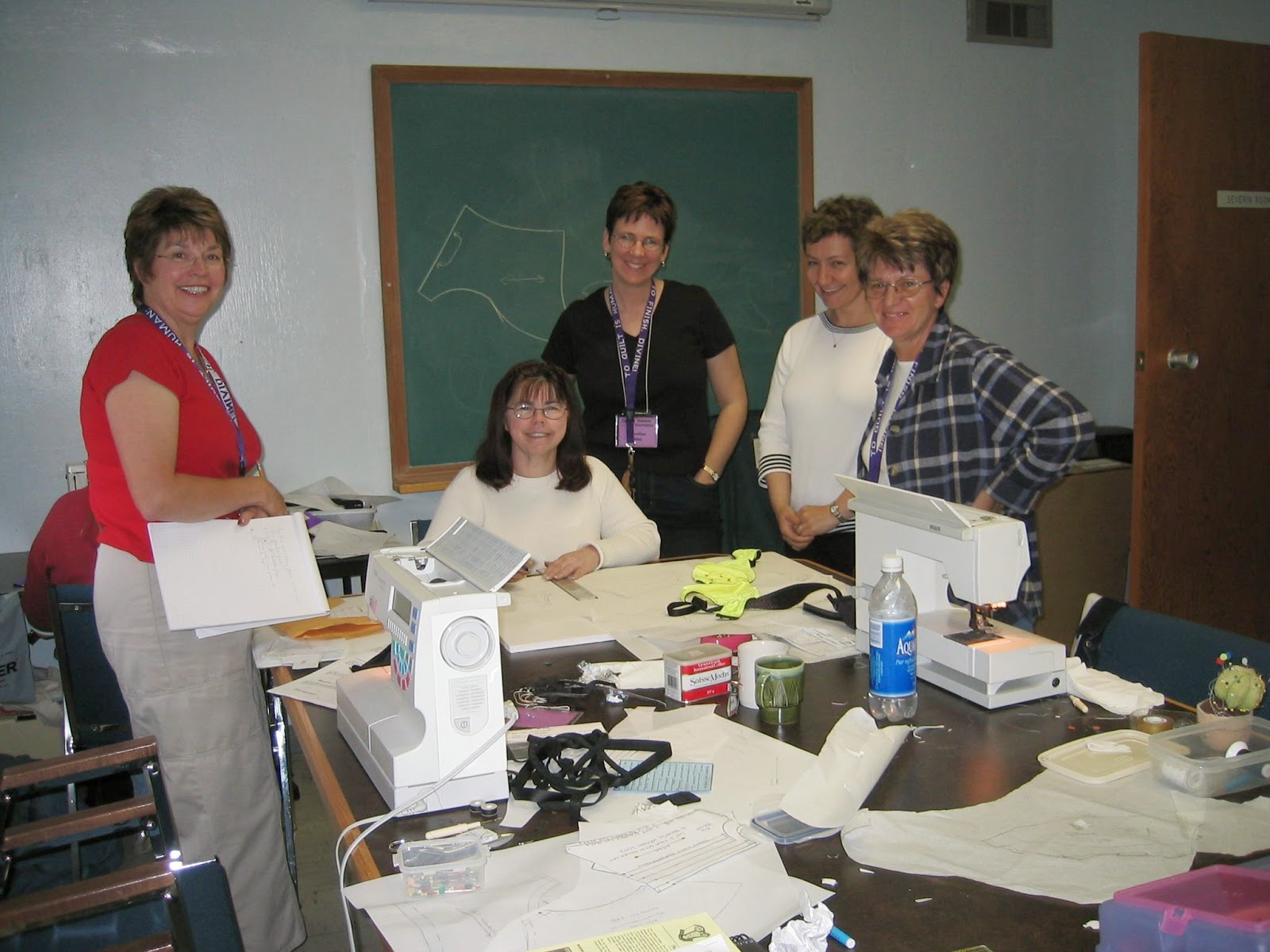 But I was also teaching bra-making. One of the things I have been most proud of, is that everyone, big or small can get a great bra when they make it themselves. Here are two happy bra-makers…well maybe they have things mixed up a little! 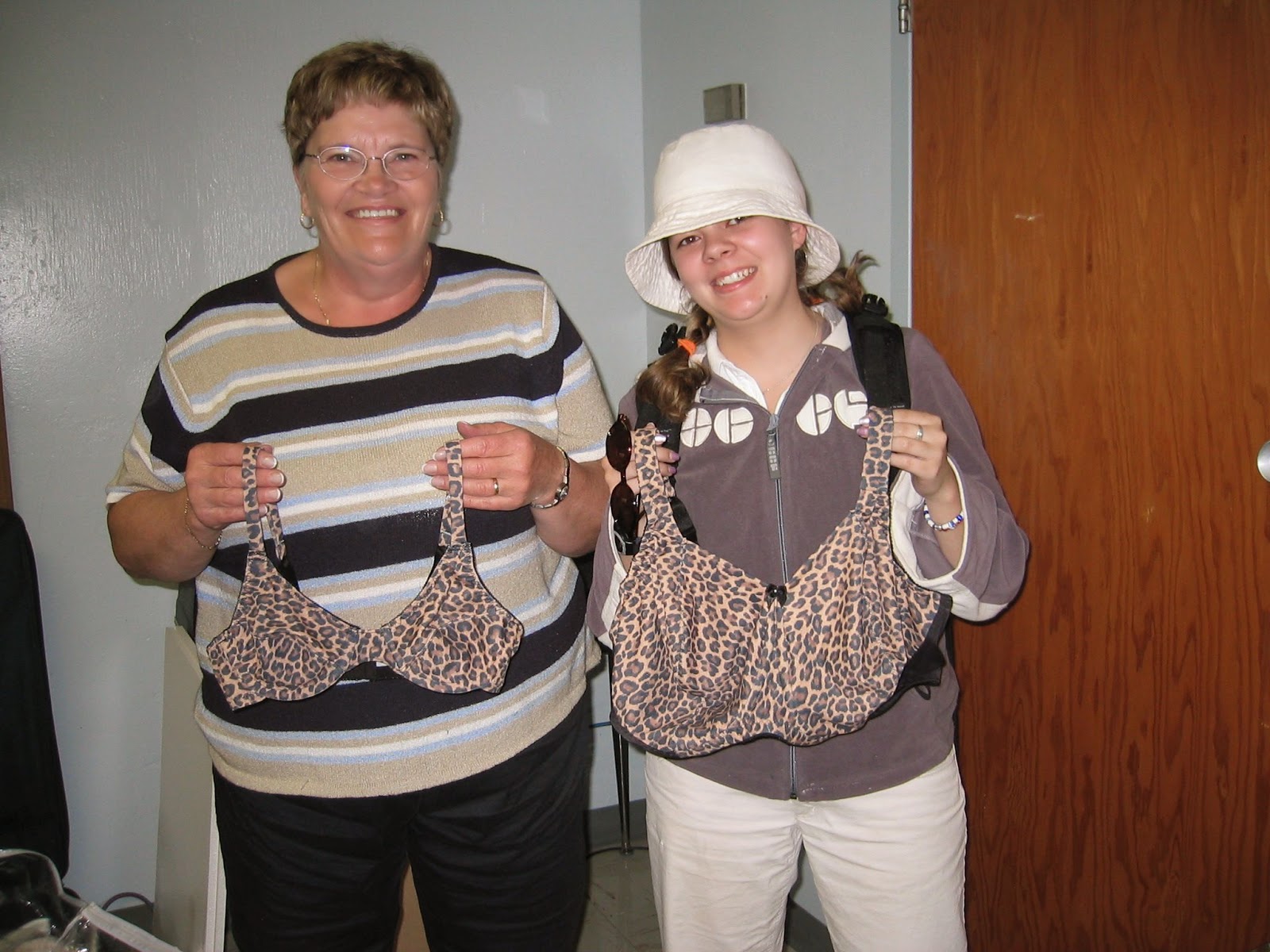 In 2004, the Conference is drawing interest from sewists all over Saskatchewan. Here we are in Severin Hall before the renovations. You can see a few quilts hanging on the walls. At the Conference, you will see quilts and wall hangings on any vertical surface. It is like they grow there overnight! 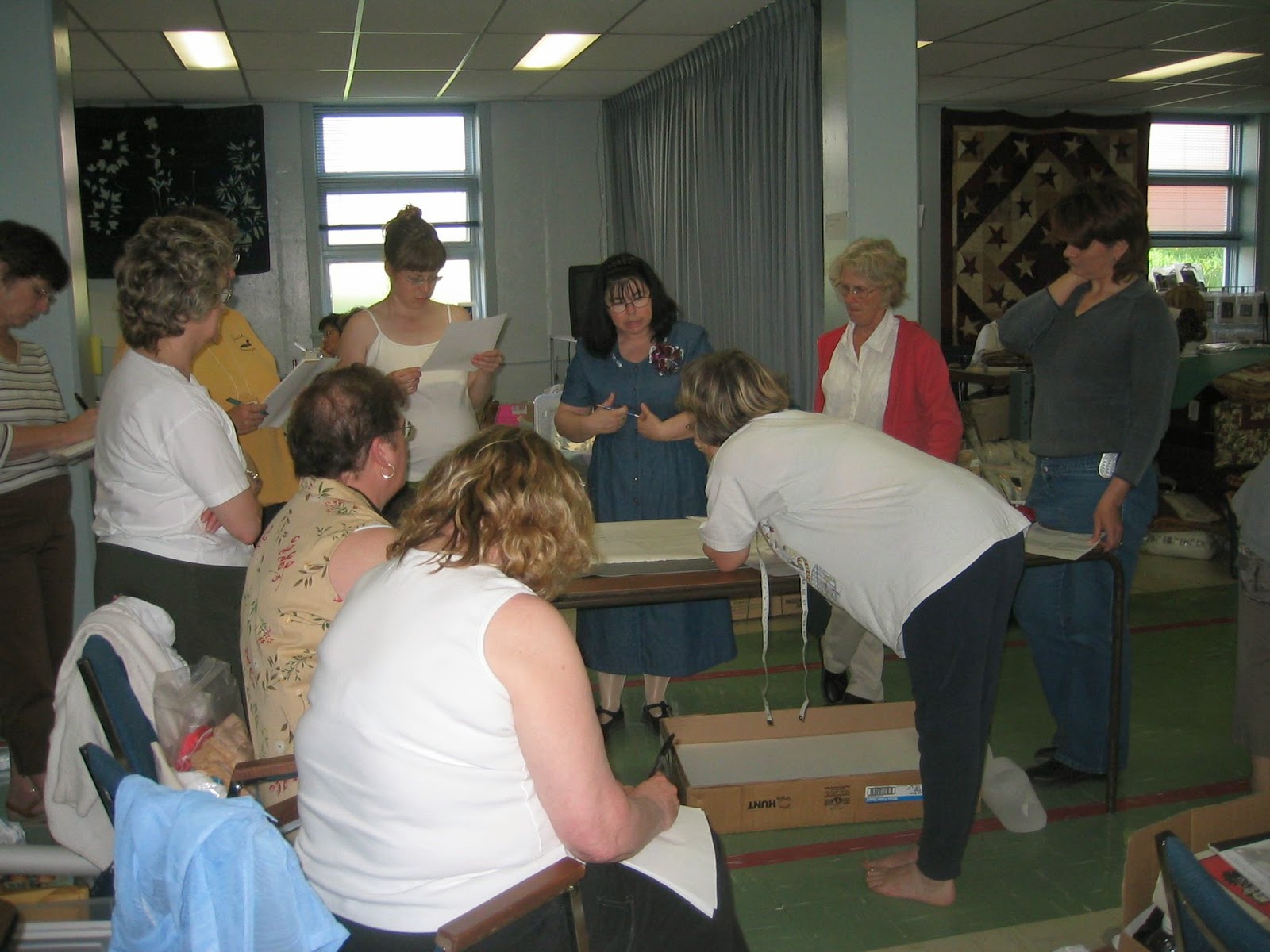 By 2005, our bra-making class is full and we had to add a second beginner bra class to the list. This is one class. Different quilts on the walls every year! 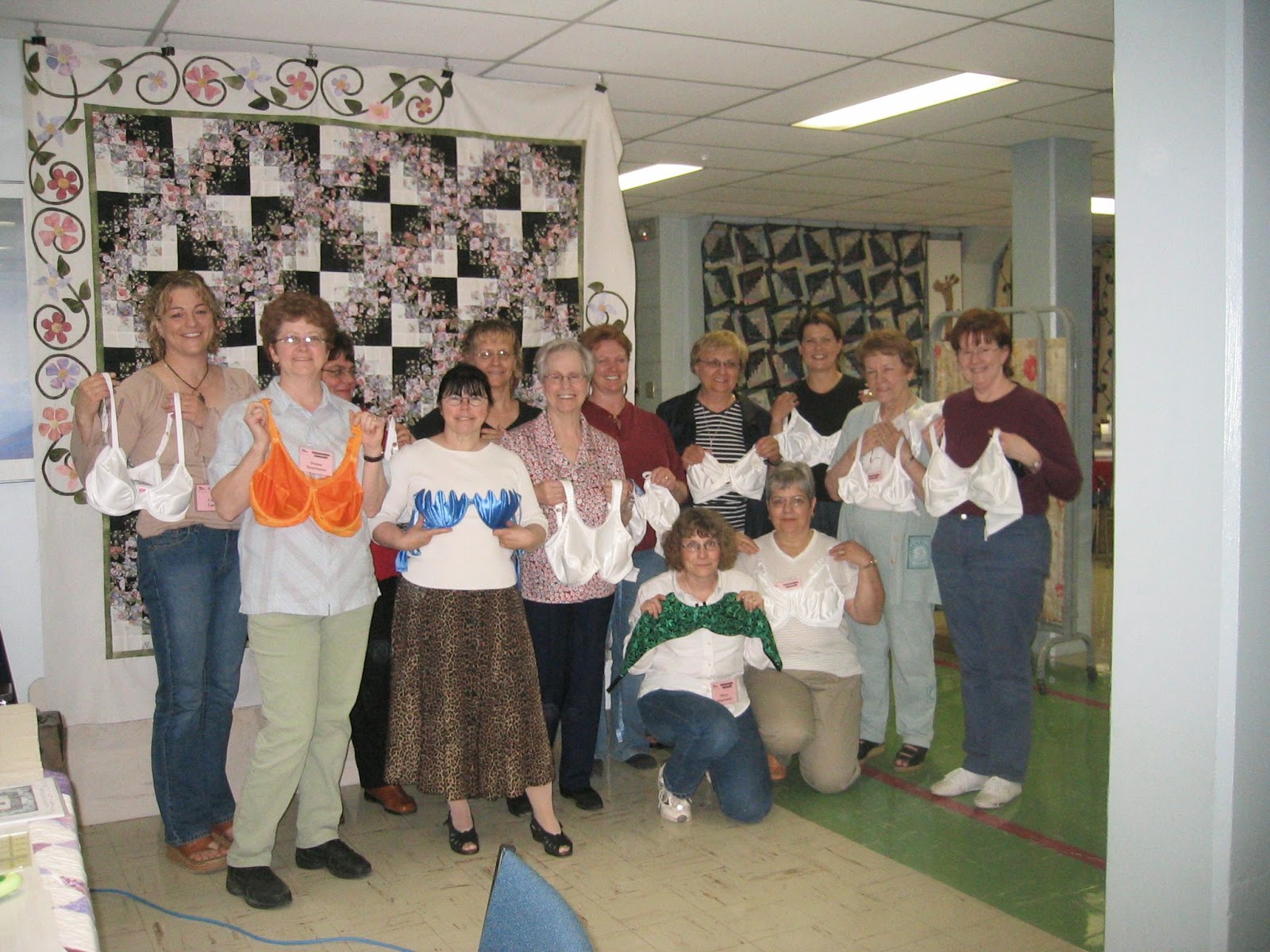 Sometimes at a class, women are just so happy to have a bra that fits, that they will pose for photos in it! Sarah (Wendy’s daughter) came back for another bra-making class in 2006! 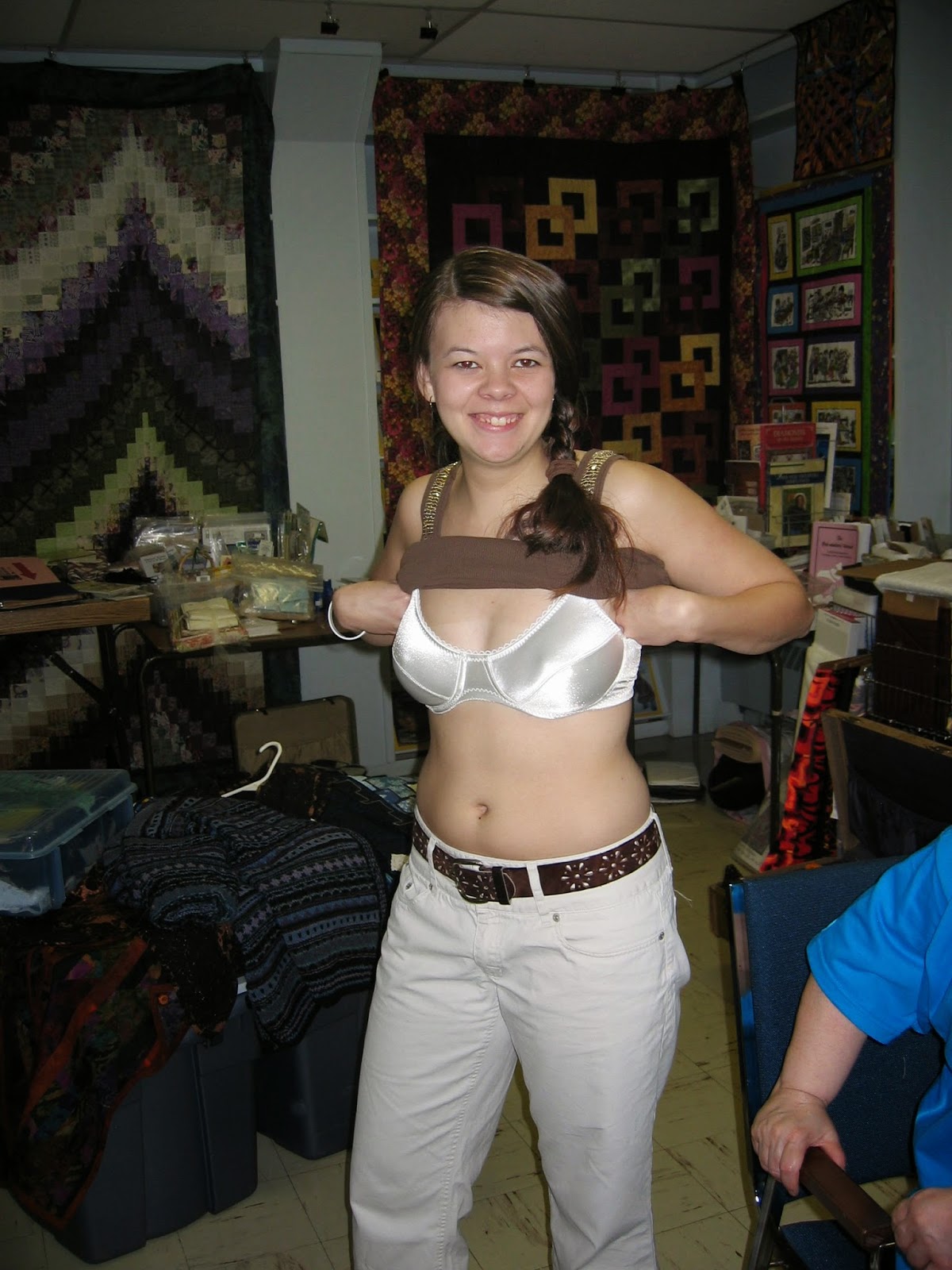 2007 – to be stitchin’ is Heaven! When you have quilters, knitters and bra-makers from all over the province gathering at Conference, you can make lots of new friends or…you can meet up with old ones from far away! Here’s Noreen and Judy re-united at Conference. 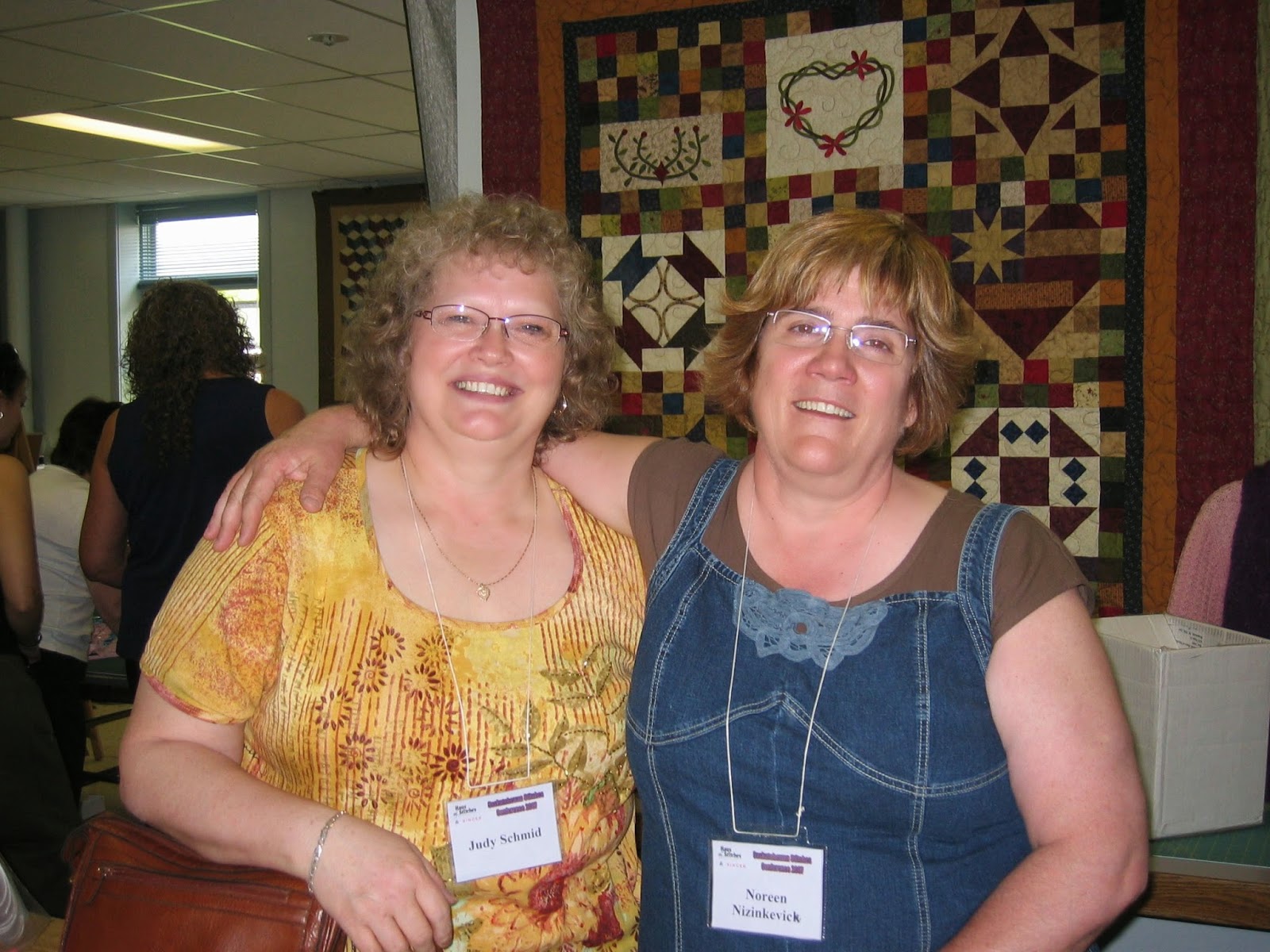 It wasn’t all bras and panties, either. In 2007 we added a corset class. Once again, Sarah went to the head of the class and made two! Here is her second corset 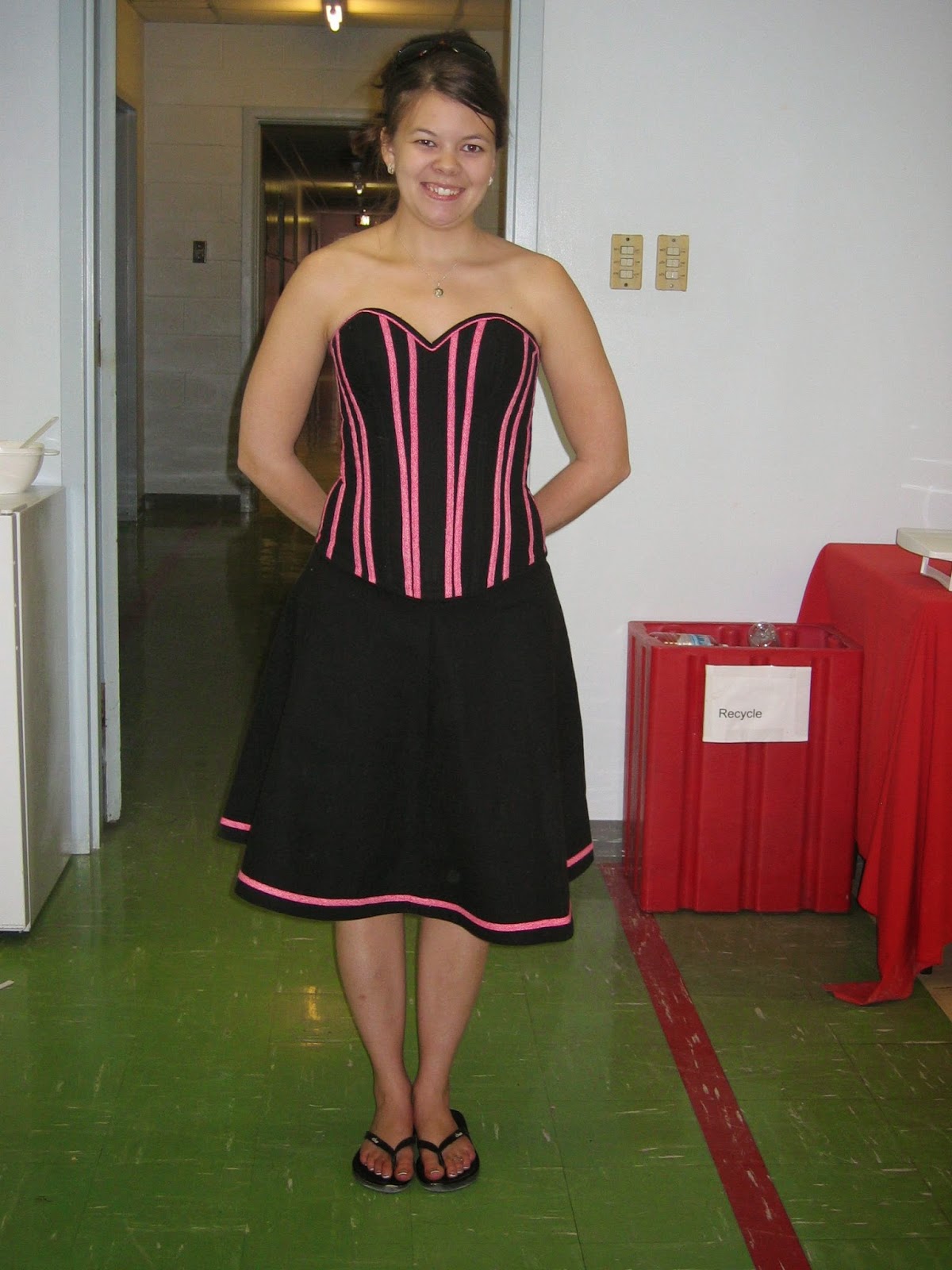 In 2008, I held a special class before the Conference started to train a few women to teach bra-making in their areas. Because the conference had 3 beginner bra-making classes in 2008, those ladies got a LOT of practice fitting all different body shapes and bust sizes. Margaret and Iris (behind me on the left) founded the Association of Western Bra-makers and teach all over Alberta, Saskatchewan, British Columbia and Manitoba! 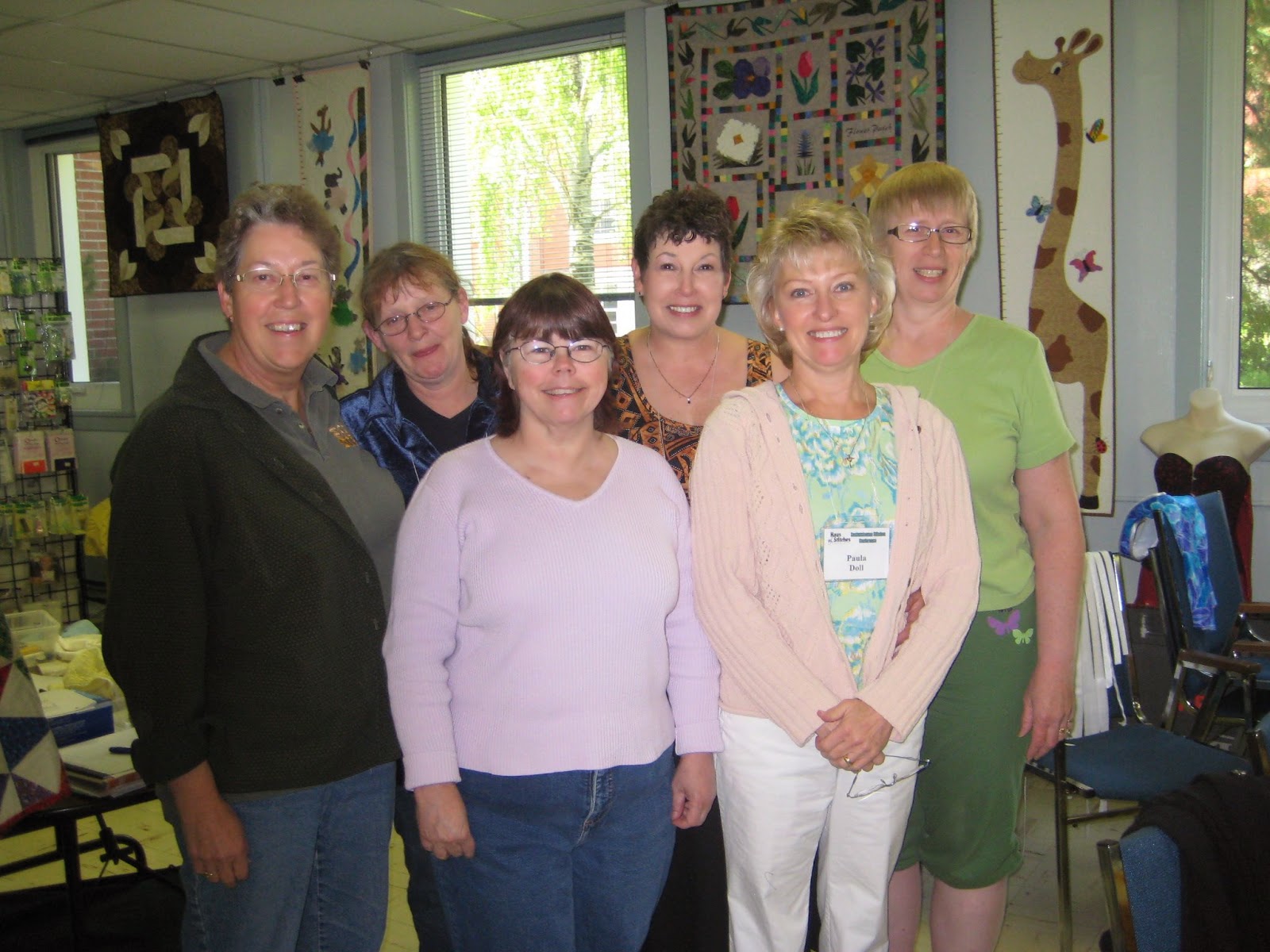 In 2009, I brought my Mom with me to the Conference. Mom lives in New Brunswick (east coast for those of you not from Canada) and a journey of many thousands of miles. I thought she wouldn’t have enough to keep busy for 11 days, but she sat down and sewed two quilt tops. She was like a machine! She also loved listening to her eldest daughter teach the bra class, as she was set up in that same room. (well, I say that, but maybe she was thinking…will she ever stop talking?..lol) 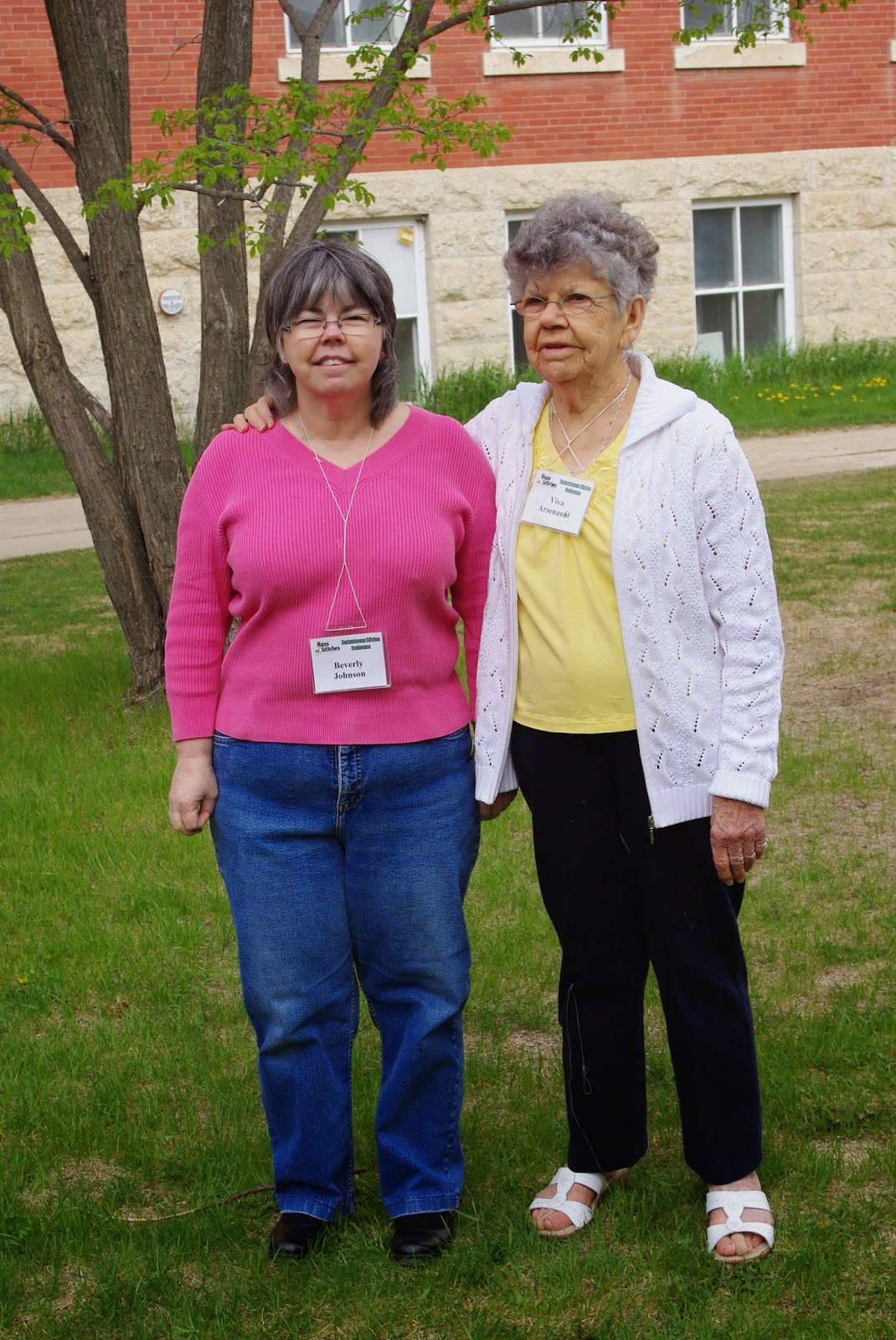 OMG! I cannot believe I allowed that photo to be taken. I have to something with my hair! That’s just hideous! But Mom looks good!

OK, the following year in 2010, I DID do something about my hair. And my glasses. We added more classes to the bra-making menu. Here is a Shelley class. I usually take only 12 students in a class, but a few more appeared out of nowhere. Thank goodness Becky (second from left at the back) was there to assist me! 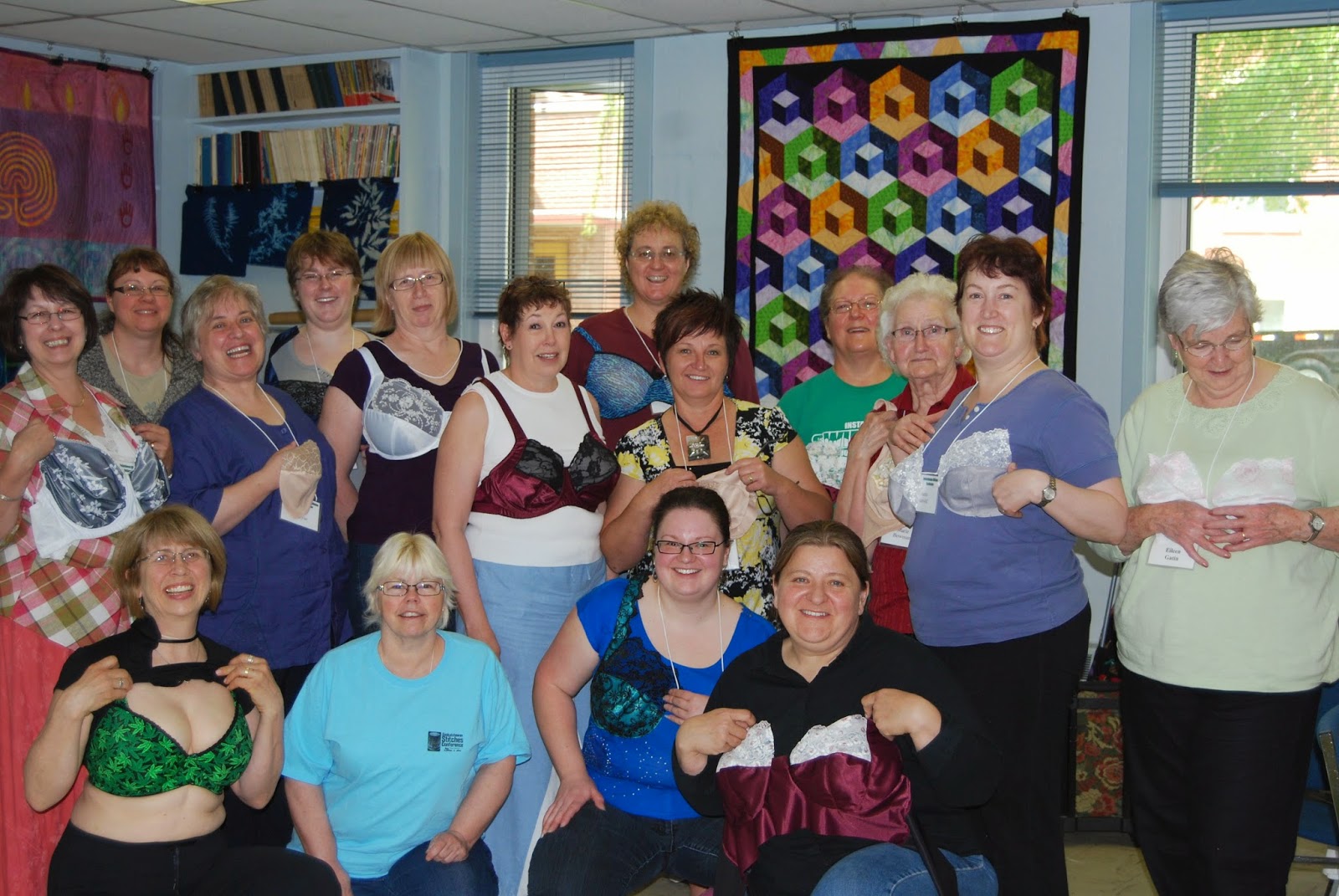 In 2010, Mom came back again! Second time in Saskatchewan and there were lots of women who knew her…mostly by reputation as Beverly’s mom, but I told her they knew her as the human sewing machine from the year before! She lived up to her reputation that year, too! Still sewing. She ended up buying that Elna machine she is working on in this photo. 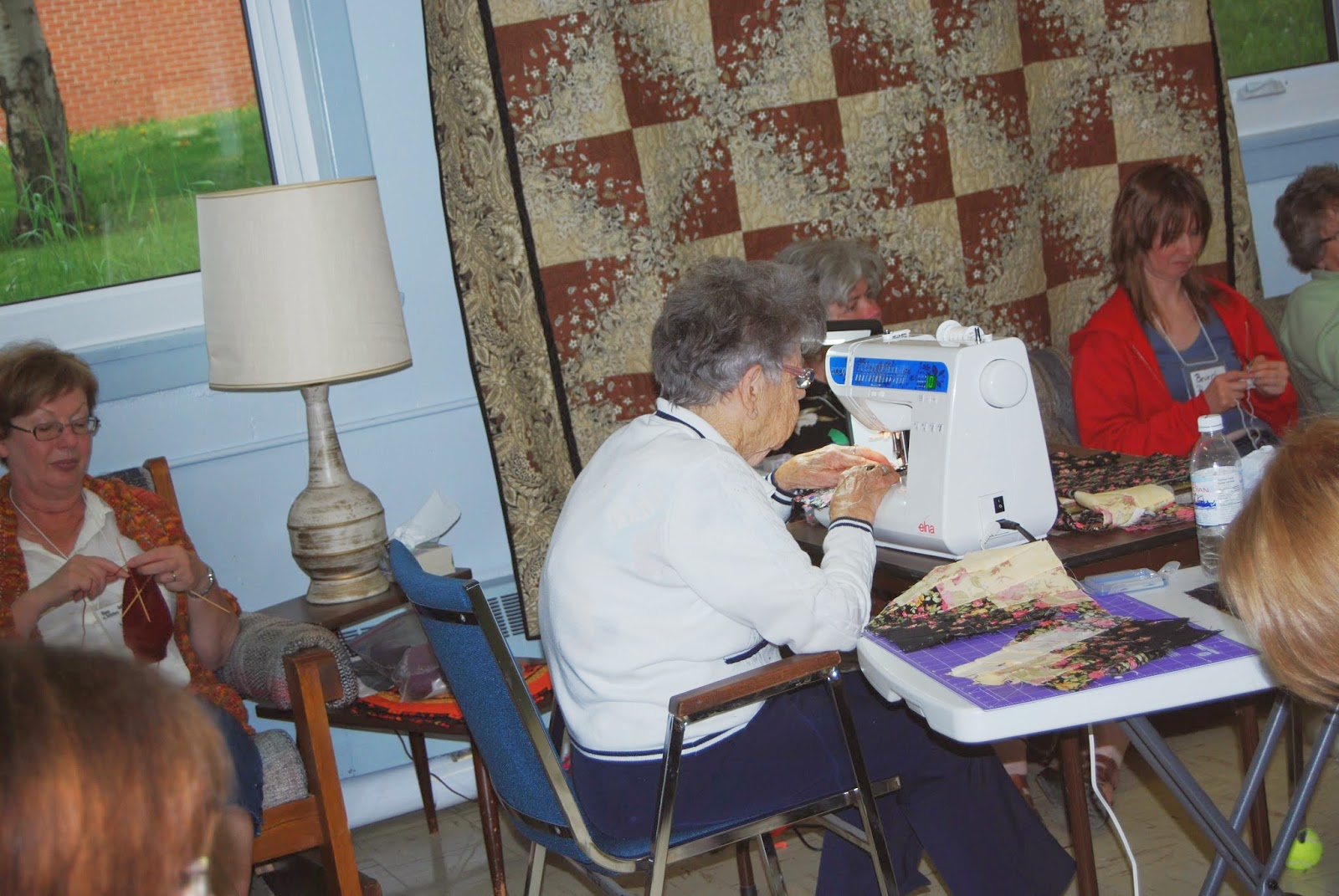 In 2010, the renovations to Severin Hall have been completed. One of the things renovated was the snack kitchen behind me. It’s tucked at one end of the largest room so that’s usually where I teach. Right by the fridge! 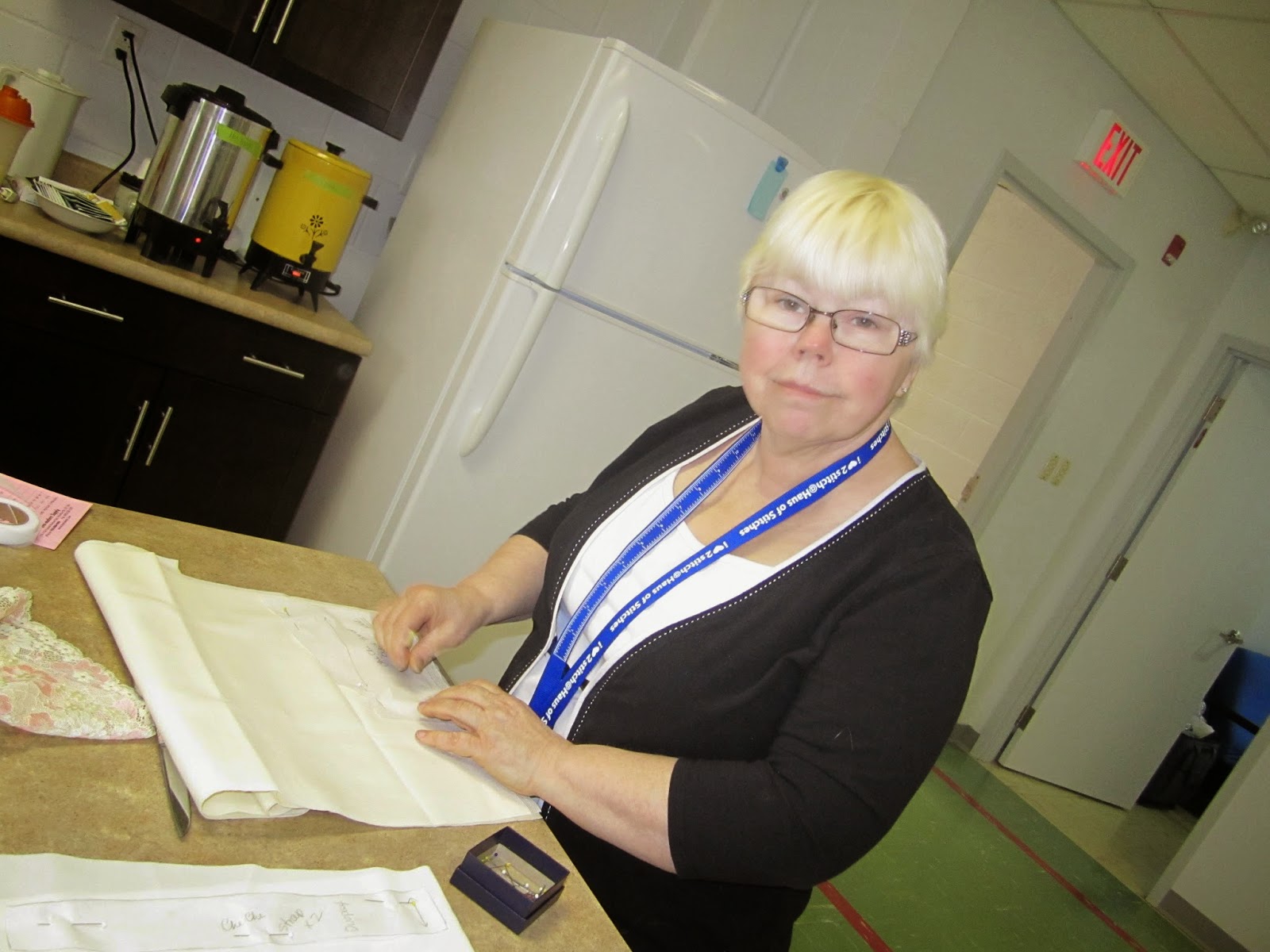 2012 marked the 10th anniversary of the Conference. Where did the time go?  I was the keynote speaker at our Gala. My speech was called “Uplifting Endeavors – Titillating Tales from the Fairy Bra Mother”. I even made this dress for the occasion! 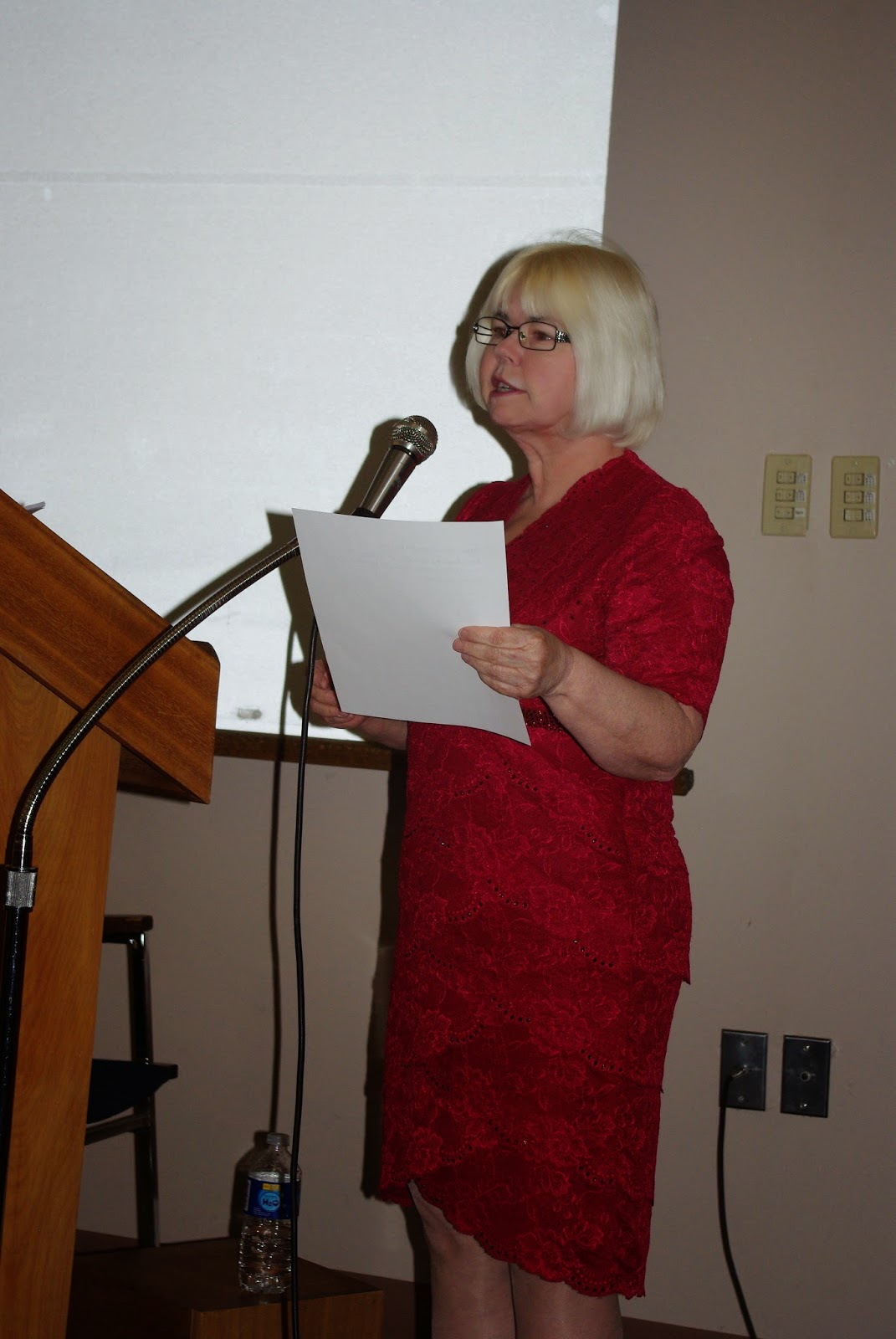 Wendy even had this cake made special for the Gala. How fitting…as well as uplifting! 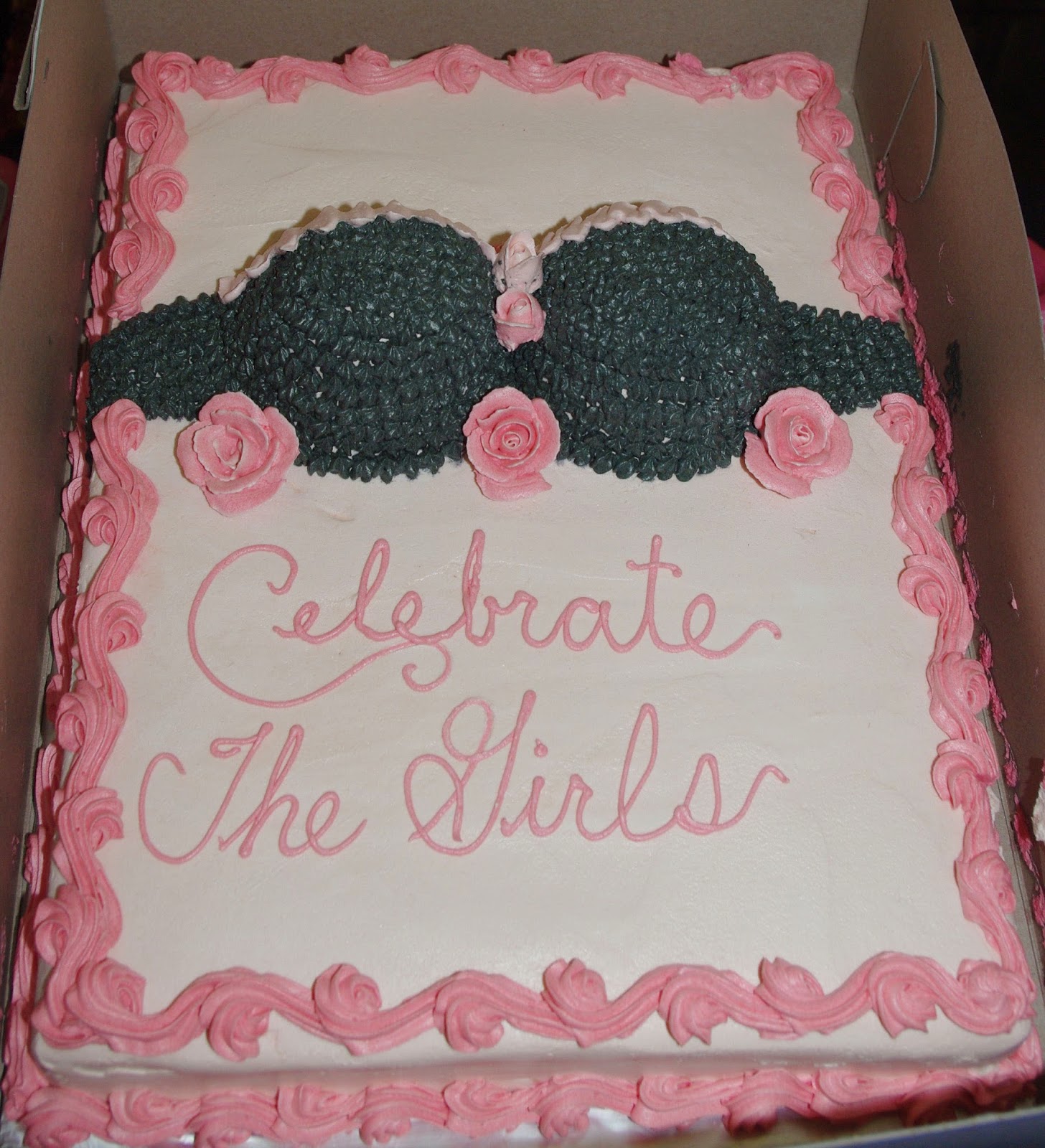 Now it is 2014 and there is another Conference starting on Thursday. I will be back teaching bra-making, the Shelley Bra, Corsets and Swimwear this year. But this year is a bit different…

This year, I get a day off to take a class. This is the first time I have taken a class – I am always the one doing the talking – now I will be the one sitting quietly in the corner, working. Well, maybe…don’t count on it!

The class I’ll be taking is Landscape Quilts. This was the landscape they showed us. I loved it. It combines a lot of things I love – fabric, thread, and stitching! I used to teach decorative thread arts so this class is right up my alley. A class for some me-time! 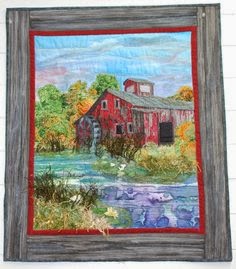 I will try to blog from the Conference each day. I am excited to be seeing friends I’ve known from the beginning of the Conference, and look forward to meeting new ones! Here’s to another successful year, Wendy. It just keeps getting better and better!