My first full day in Sweden and it started off with a trip to my favourite Swedish grocery stor – Ica Maxi! 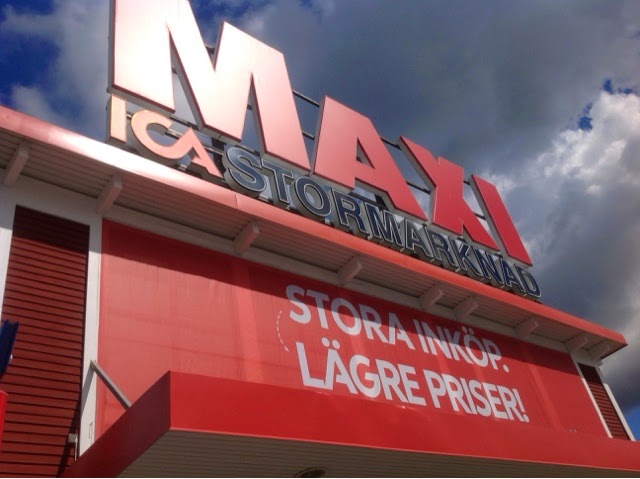 Ica Maxi has everything from clothing to groceries and lots of whatever you might want! Apparently, the Ica Maxi in Haninge, which is where we are just outside Stockholm, was modelled after the Fortino’s in Hamilton. Isn’t this a small world? One thing I love is the scanner system for tallying your bill.

Pick up a scanner from the wall of scanners. You have to have a membership card in order to activate the scanner, but the card is free, so that’s ok. 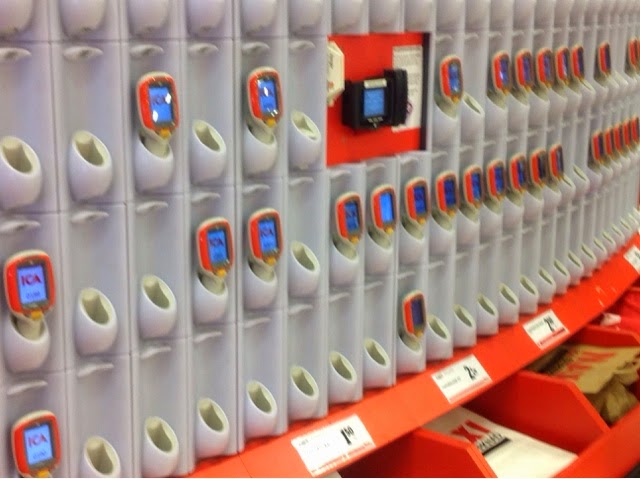 Here’s what they look like up close. They fit into a space on the handle of the scanner. 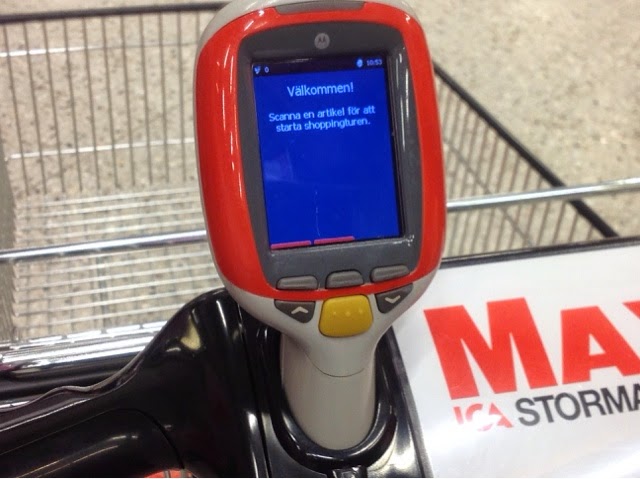 Every product has a bar code. Just scan the item as you put it in the bags in the cart, and you never have to touch the items again until you get home. The scanner keeps a running tally so you always know how much you have spent. 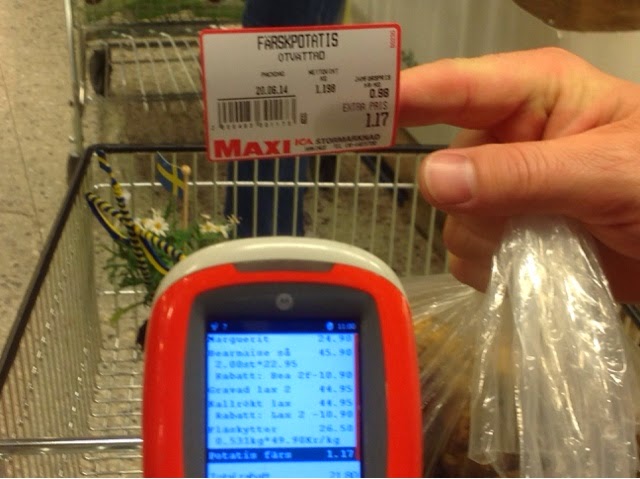 This is a shot of “part” of the produce section. Yum…the new potatoes have just arrived! We bought a big bag of them for 1.17 Swedish kroner, about 17 cents! Not everything in Sweden is cheap…but today is midsummer and new potatoes are part of the traditional midsummer meal so they were on sale! 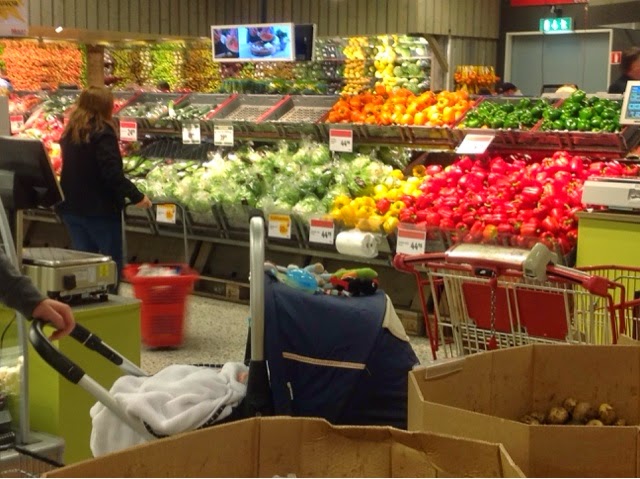 We also bought a small daisy in a pot to plant. You can see the Swedish flag and the pole in the pot that signifies the midsummer pole. More about that later! 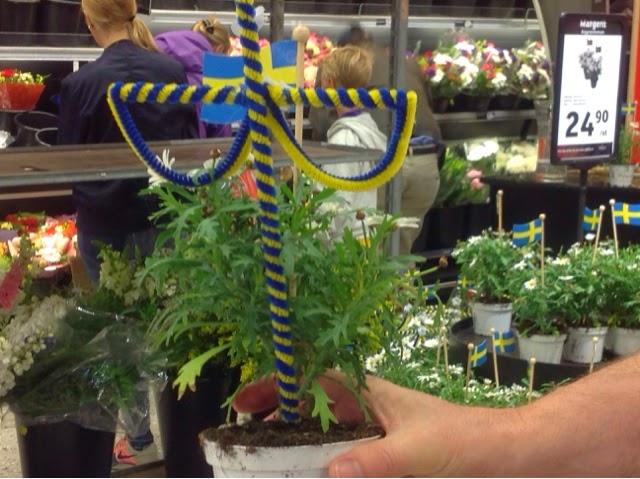 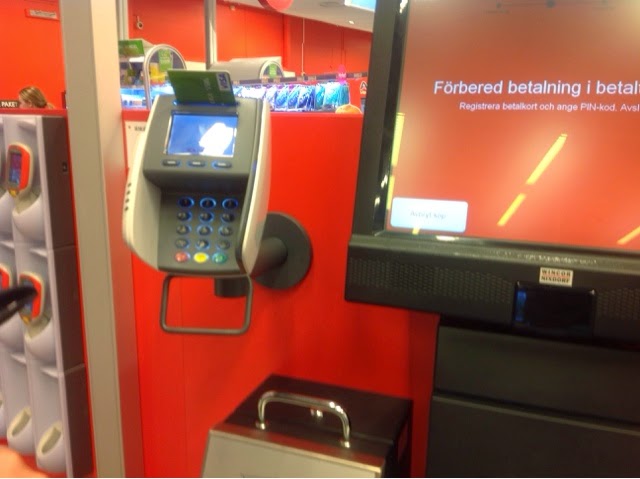 Later that morning, we went to the midsummer festival at the county castle. They have a huge meadow and grounds for holding a lot of people. We walked down to the harbour where the boats wee starting to pull in. 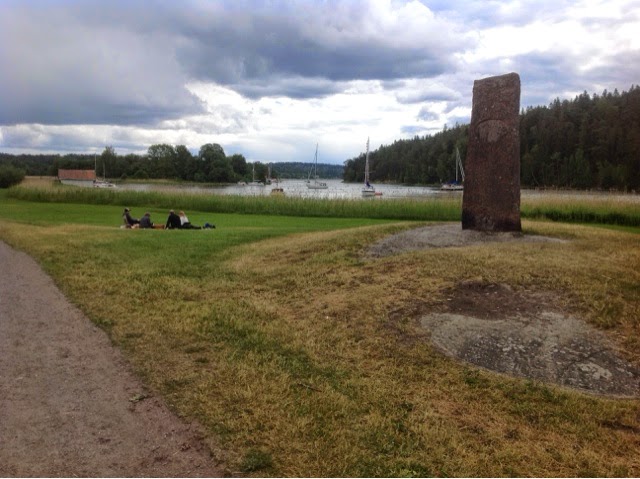 The archipelago here goes to the Baltic Sea. Way, way out there on the left, beyond what you see here is Finland. That’s Lillebror on the rocks at the end of the land here. 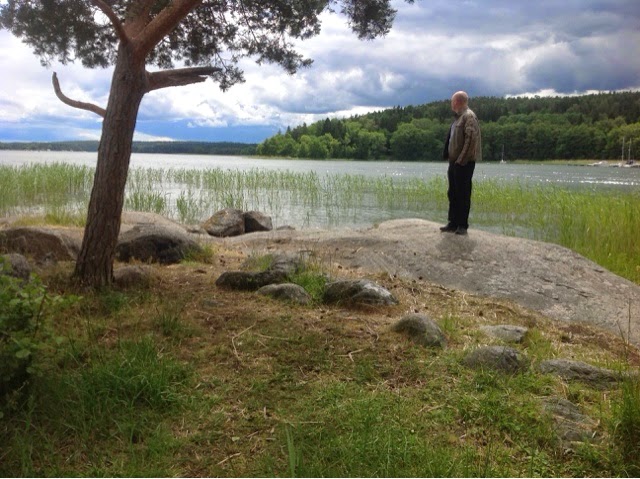 Down at the harbour, even the dogs are dressed in life jackets for a day on the water! This little guy reminded me of Erin’s dog Finnegan! Maybe Erin will sew him a life jacket! 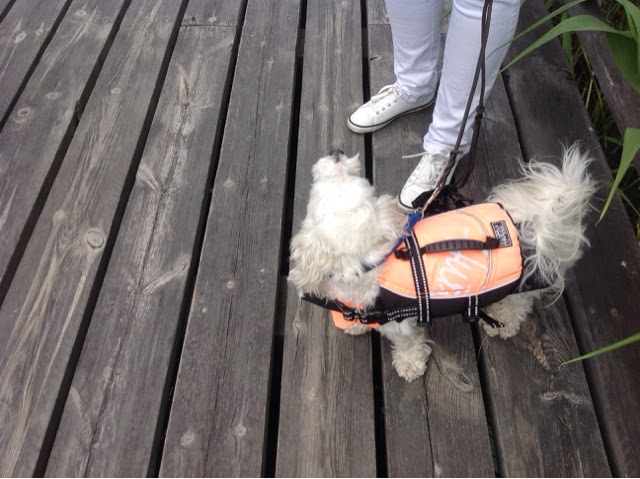 The festivities are starting! Here’s the traditional crown worn by the children. She needed a bit of convincing to let me take her picture. The crown is traditionally mostly greenery, with a few flowers tucked in for colour. 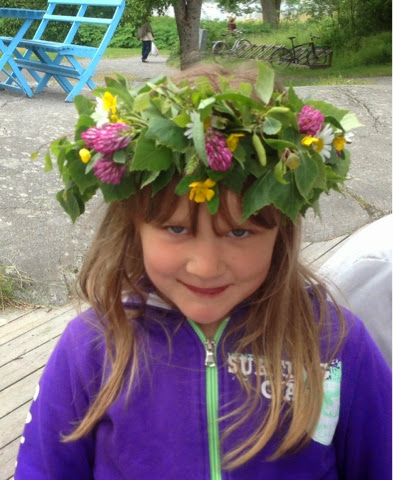 A big pole, about 20′ (7 metres ) decorated with leaves and flowers is raised up in the middle of the area. The children and adults will all dance around the pole to traditional music in the meadow. Here’s the pole with the castle in the background. 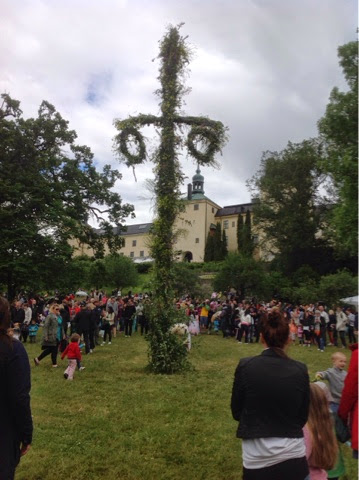 A town elder starts dancing and everyone joins him around the pole. As the circle grows, they wind around so every other circle is going in the opposite direction. It could be chaos, but everyone seemed to follow quite well. 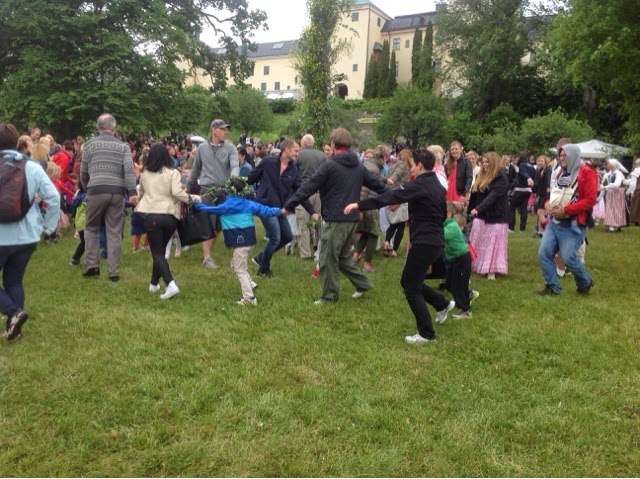 Like any festival, there are things available to keep all ages happy. Like balloons of all shapes and sizes. Butterflies, kitties, princesses and helicopters…I think children would have a hard time deciding which one they wanted. 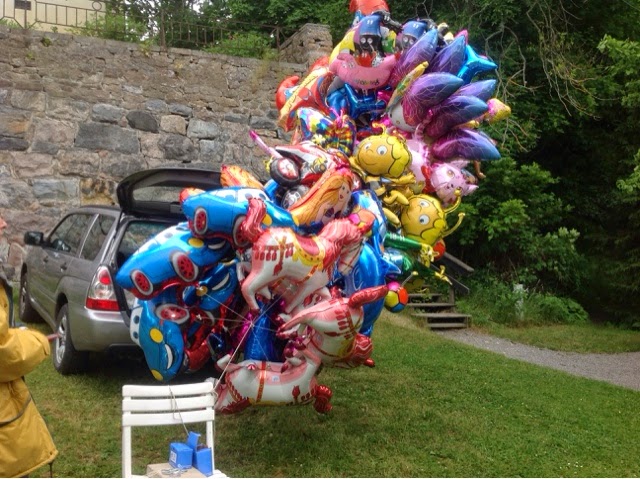 There were stalls like this for the older children, although it was mostly adults standing in line! Here are three stalls. Pick one, from left to right according to the prizes you want to win..or hope to win. They are “a prize every time”, bears (nallen) and dogs (hunden) 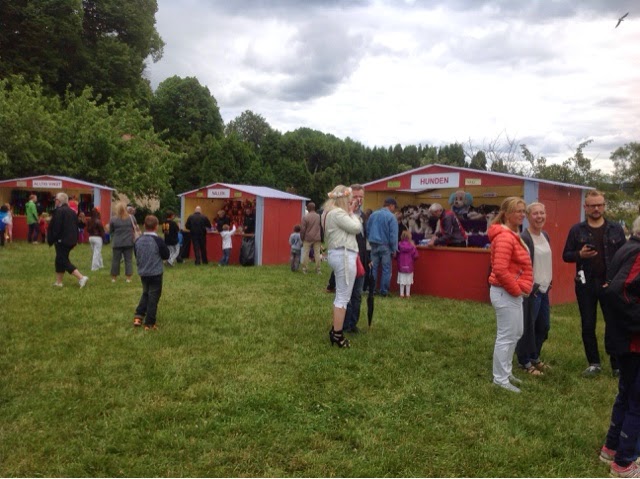 At the booth, you buy a lottery ticket with 6 plays on each. Pull the flap. If you have three prizes the same in a row, you win a prize. All proceeds from the festival go to charity. So off we went to the booth marked “chocolate”…..really, all the prizes in that booth were chocolate! 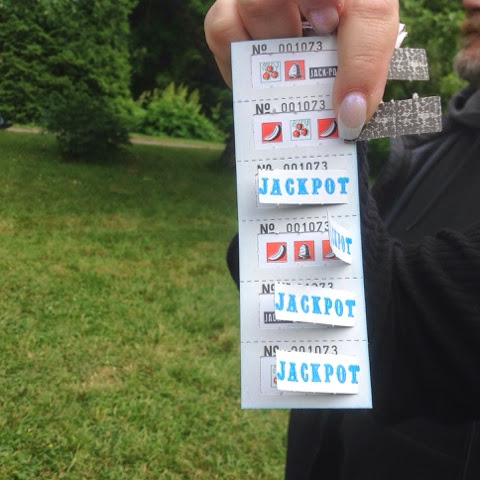 I won some chocolate bananas! 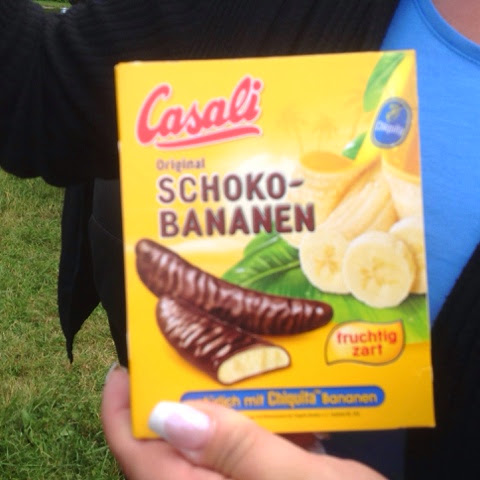 No festival worth its salt would be without food. I got a hot dog which was quite long, about 25 cm or 10″ but the bun was only half its size! Honest…the bun was a min bun! Well, I liked that…except it meant no hammock beneath the meat to catch all the toppings! They didn’t have relish, but they did have  French fried onions as a topping! Hey…don’t knock it if you haven’t tried it! 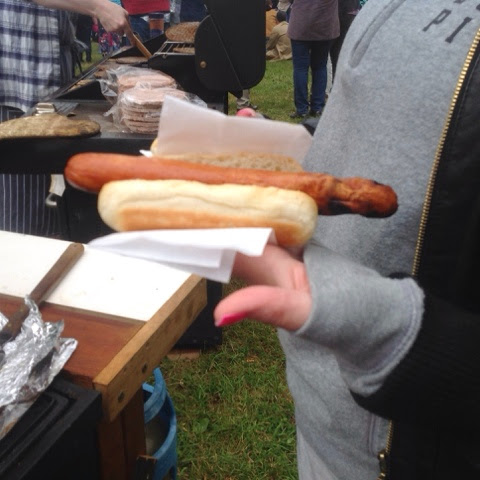 While I was waiting in line, I saw these car shaped candies. The label says “Bilar, Sweden’s most bought car”. 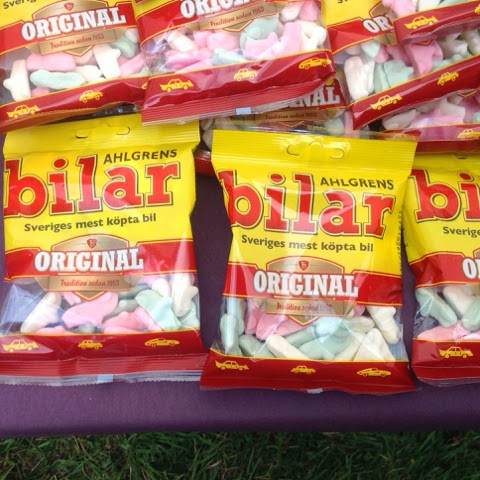 And they had a whole stand devoted to licorice! 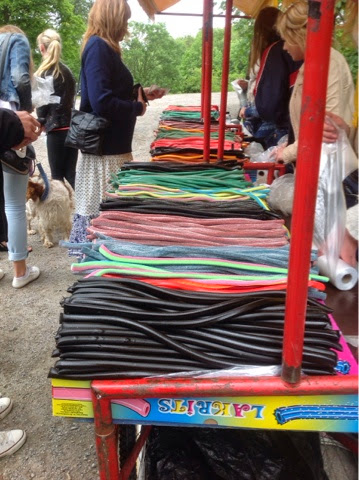 Here’s a shot of part of the crowd. But look at that oak tree in the middle! It is over 3′ (1 metre) in diameter . Apparently the old time kings got all the oak for the sailing ships from this area, which they planted many, many years before. I am glad they left a lot of them here so today’s generation can enjoy them. 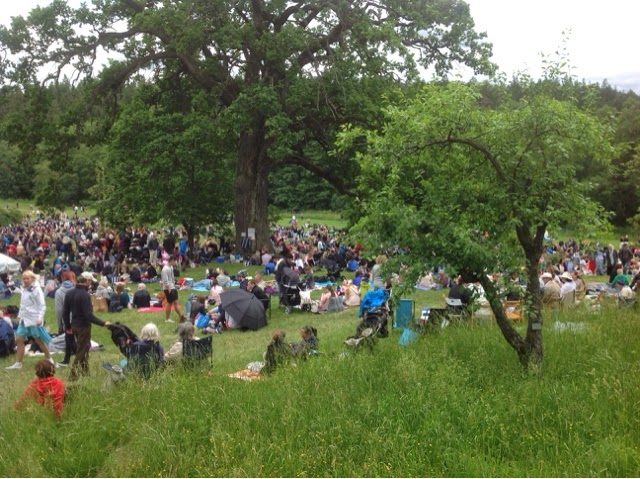 Since this is a county event, I think that most of the country turned out for a day of fun and food with familty and friends. I was very fortunate to be able to spend this midsummer day with my Swedish family, Bodil and Lillebror, Angelica, Anders and Jessica! Tack, tack!