Today we went to the Vasa Museum. This was my second time there in as many years but this place fascinates me. The Vasa was a ship built in Stockholm which sunk in the harbour on her maiden voyage in 1628. 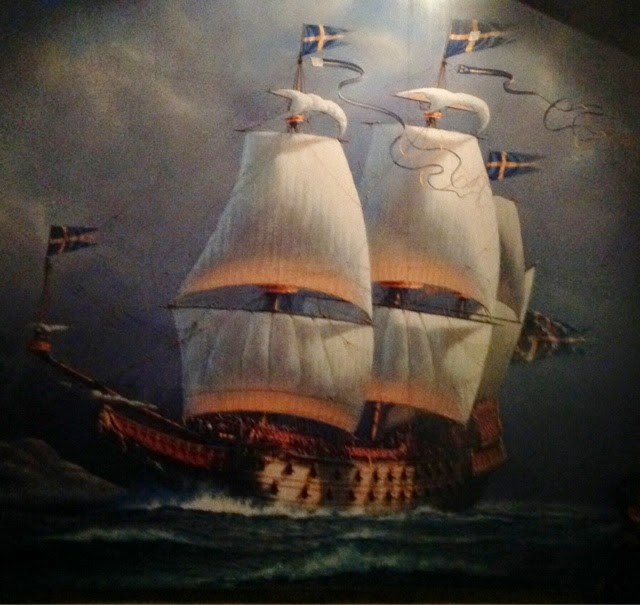 The Vasa was built in the shipyard in Stockholm and was one of 5 sister ships commissioned by the King at that time. However, the master shipbuilder kept the plans in his head and decided well into the building process that the ship could use about 50 cm more height in the gun decks. Unfortunately the gun decks were above the water line. 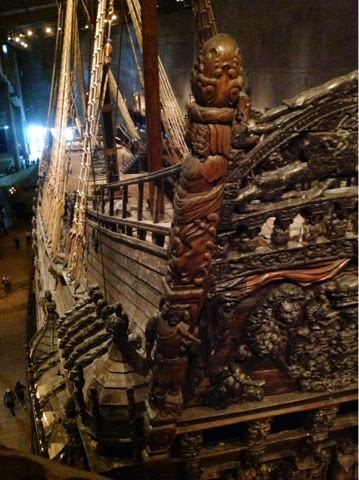 This made the ship top heavy for the width of the beam. Here is a scale model of the Vasa. This was the part above the water…but there was not enough of the ship below the water to hold her steady. You can see how near to the water the gun decks were. When she tipped a bit from the breeze, the gun decks filled with water…the rest is history. 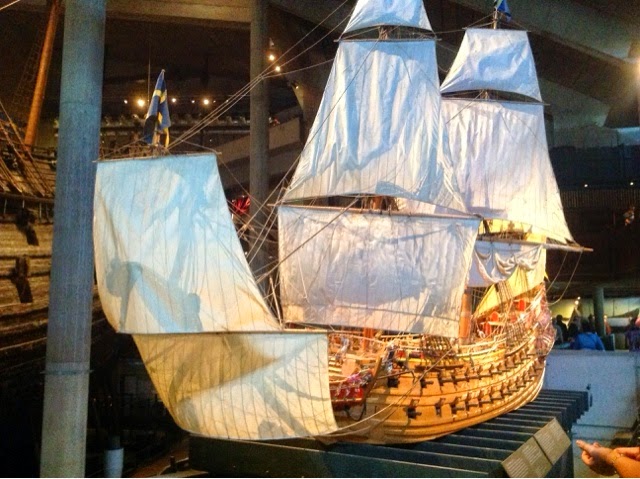 Twenty minutes into her maiden voyage, in full view of spectators and with over 250 crew and their guests aboard, she caught a slight breeze, took on water and in twelve terrifying minutes, sank in Stockholm harbour, where she remained for over 300 years.
You can see in this cross section model, that the bottom layer was the only one under water…the rest were above. And with 64 bronze cannons on two gun decks…that’s more than a mathematical miscalculation…that’s a disaster destined to happen. 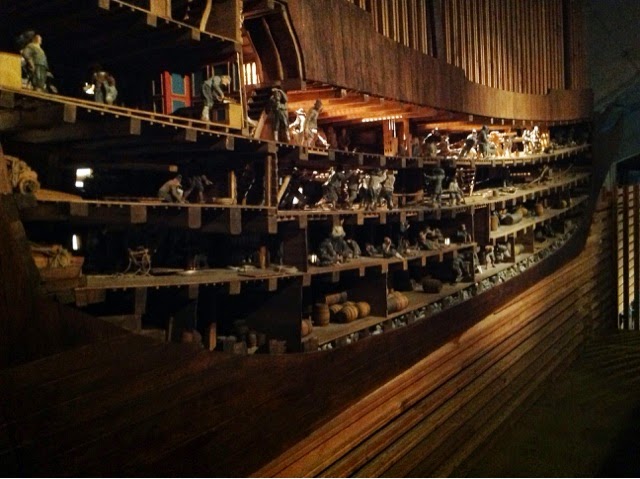 In 1959 they started to raise her from the muck and mire and the process took two years. But finally in 1961, she was guided into the harbour on her own keel to her permanent home at the site of the museum. 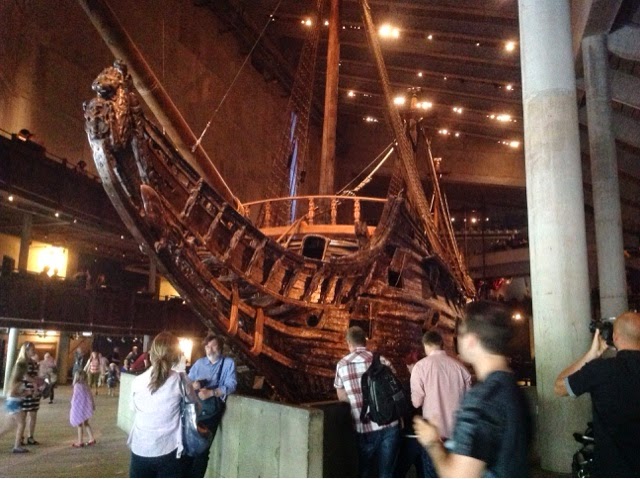 And then the real story begins…years and years of preservation to keep the wood from deteriorating. Years of forensic anthropology to reassemble and try to identify the 30 some-odd skeletons that were found (including those of two women, probably relatives of a senior officer)
300 years in the water didn’t do the paint job any good. However with microscopic examination, they were able to determine that the stern looked like this, complete with the King’s seal – the opulence of which designed to impress their allies and terrify the enemy. 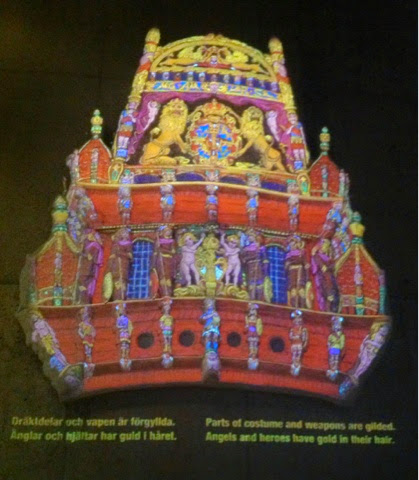 Over 700 wooden sculptures were on the original ship. These are re-creations of some of the ones on the stern, the colours are as close as they can determine. 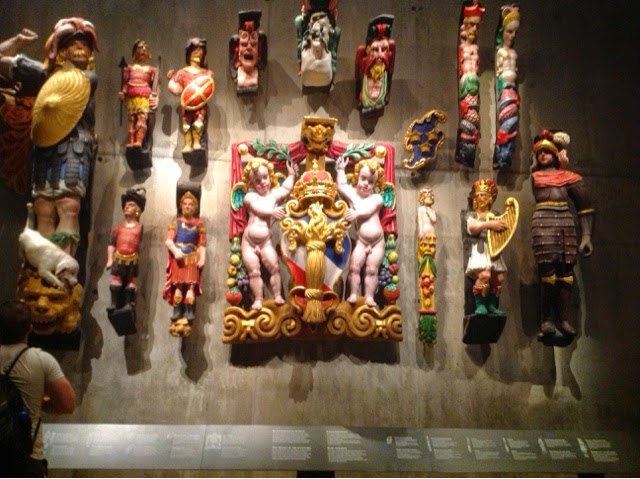 Here are samples of the types of powders for the paint they used for those rich colours – paint that would not be allowed today because of their carcinogenic properties. But back then, it was a different story. Lead and antimony in paint was a fairly common occurrence. 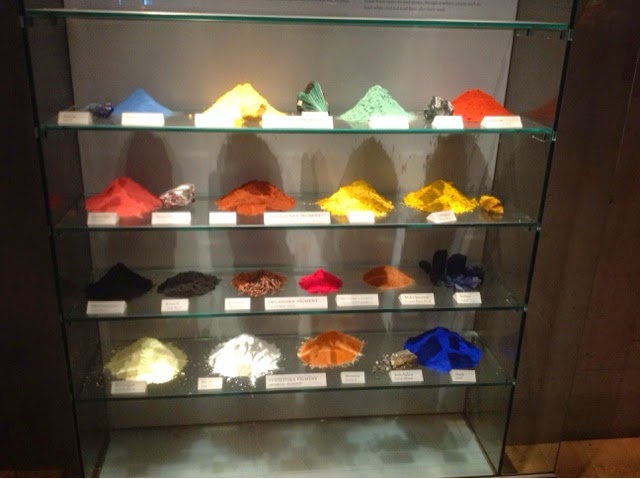 The fabric sail was restored as much as is possible when you consider the canvas fabric was the consistency of wet leaves. But about one-third of the main sail was recovered, sealed between two layers of plastic and put on view. You can see here the panels still with hand stitching visible. 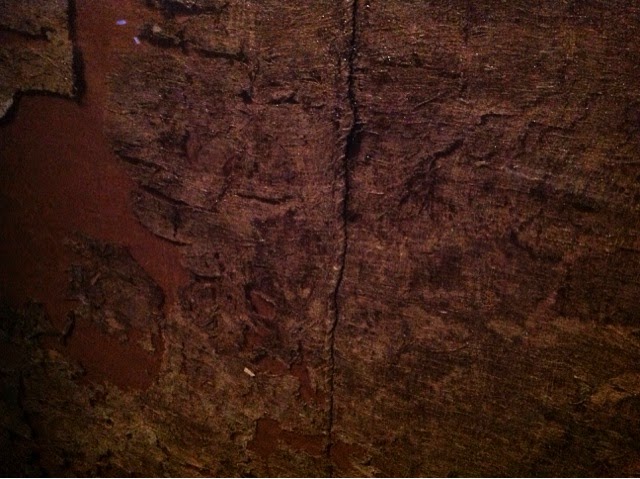 The figure head was the lion, a symbol for the King of Sweden. In fact all the gun doors had a lion carving on them…over 70 lions in all on the Vasa. All the wood was oak, so the gun doors weighed over 100 kg each. 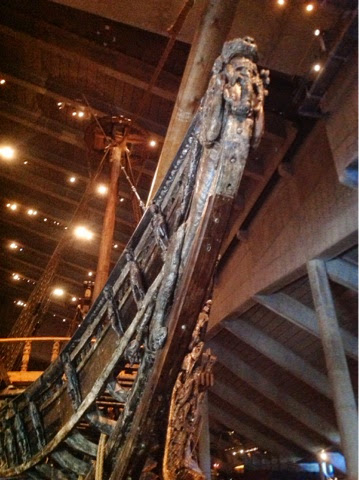 Look at the sculpture on the stern! This is the area that would have been painted. You just cannot imagine the full height of this ship! However check out the people walking to the right and the left. We weren’t allowed to touch or walk on the ship but they had lots of scale and life size models to see. 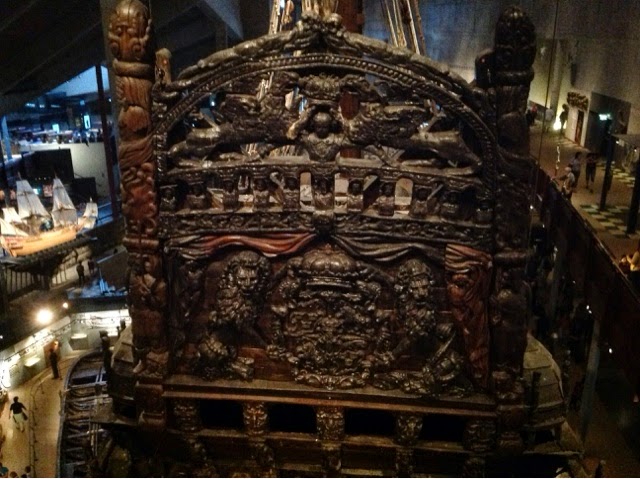 Here I am on a life size model of one of the lookouts. You can see only a part of the Vasa in the background. 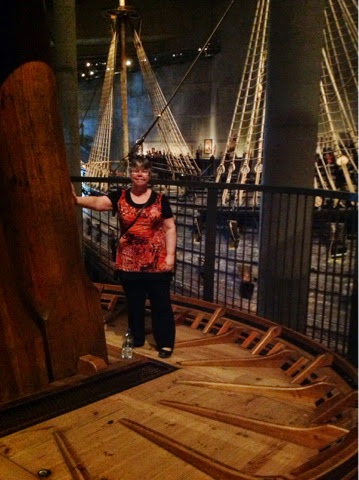 The Vasa was a maritime tragedy however it is the only survivor of that period of time. It is a glimpse into life in the shipyards of Stockholm in 1628.

Far, far away – On stage with ABBA Multiple Births at the Enchanted Castle
Scroll to top
Create a new list