Once Upon a Time and far far Away – Sew It Was

Today was one of the days that will be held in my memory as a really, really good day. We went to Sew It Was, and in my opinion, anyone who is connected to the needle trades owes themselves a visit to this very unusual museum. It will take you back to the years before cell phones, and electronic sewing machines. Yes, Sew It Was is a Sewing Machine Museum! 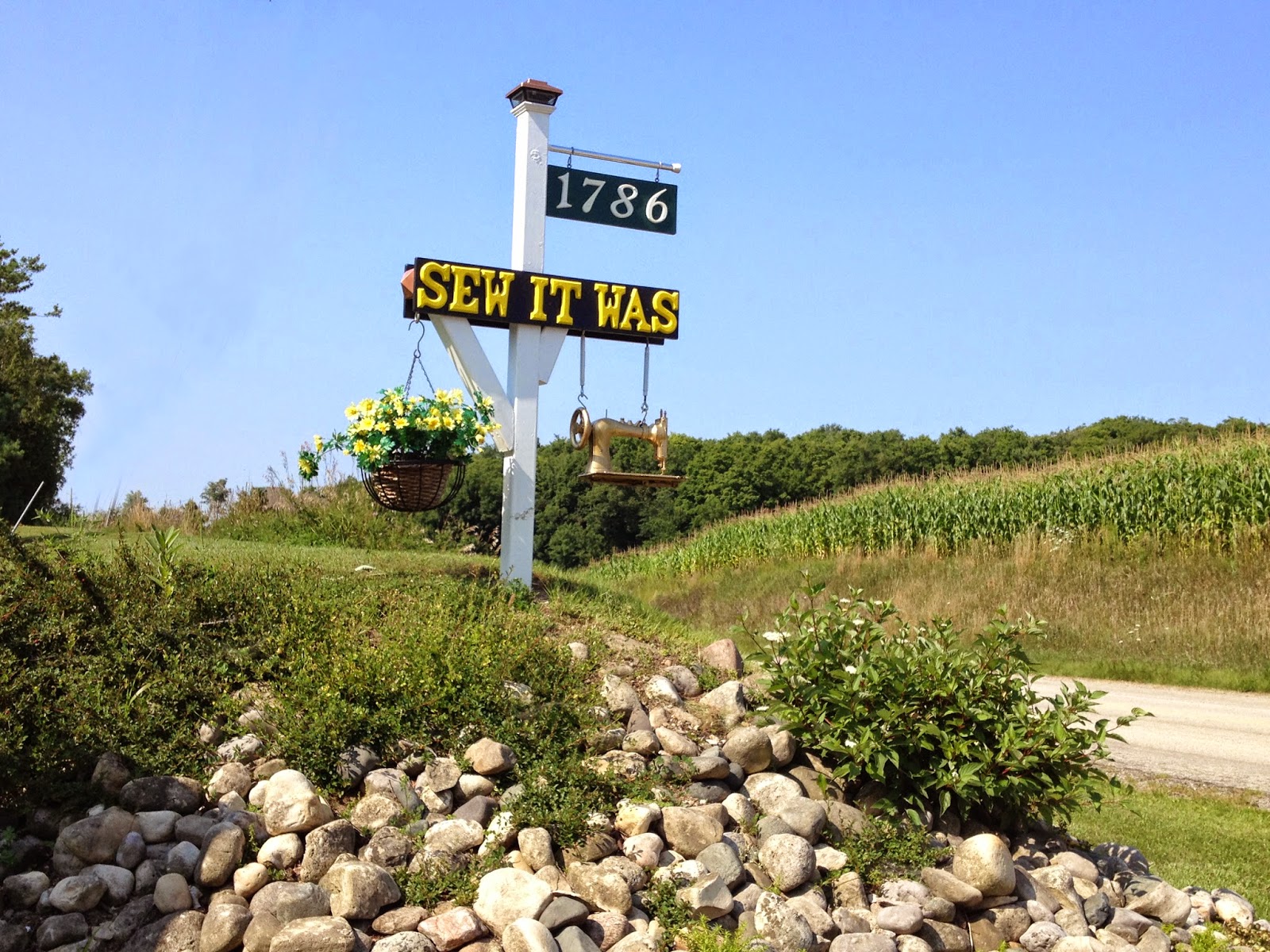 The museum owners, Carl and Joan Koenig saw an article in the paper about Bra-makers Supply and emailed us to ask if we might be interested in a visit to their little place. Hmmm…let me think about that….YES! of COURSE I was interested! Road trip! Six of our staff went to the countryside near New Hamburg, Ontario, about an hour west of Hamilton. The house is tucked away so you can’t really see it from the road, but the first view was impressive. 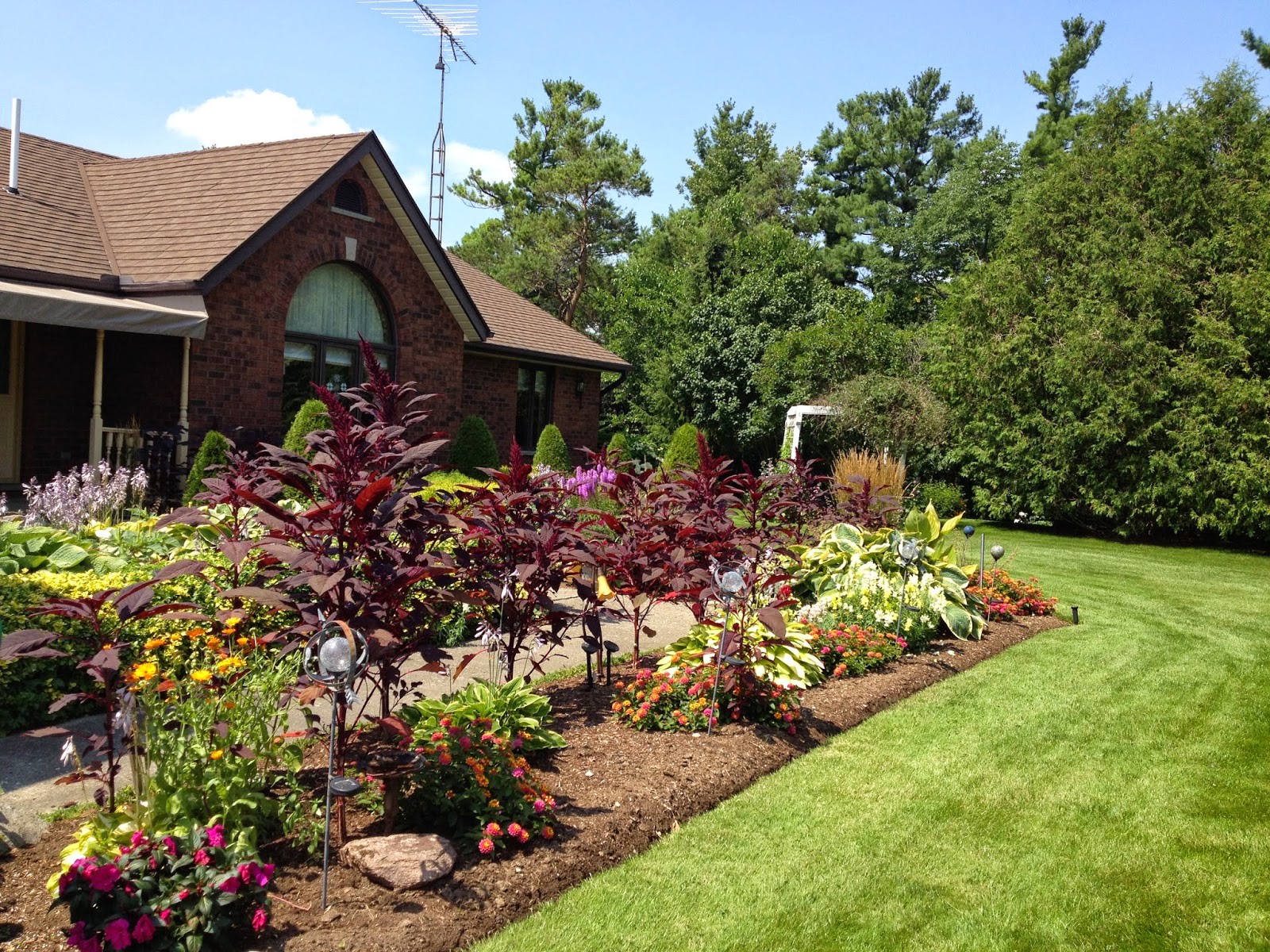 Our first view of Carl’s collection was in an antique display case in the back foyer. Here were miniature sewing machines (some for young girls, but also some miniatures). Sewing machine companies reasoned that if a child was happy sewing on their own small sewing machine – she would buy one as an adult. Umm…yep, that’s good reasoning. That’s certainly true in my case. 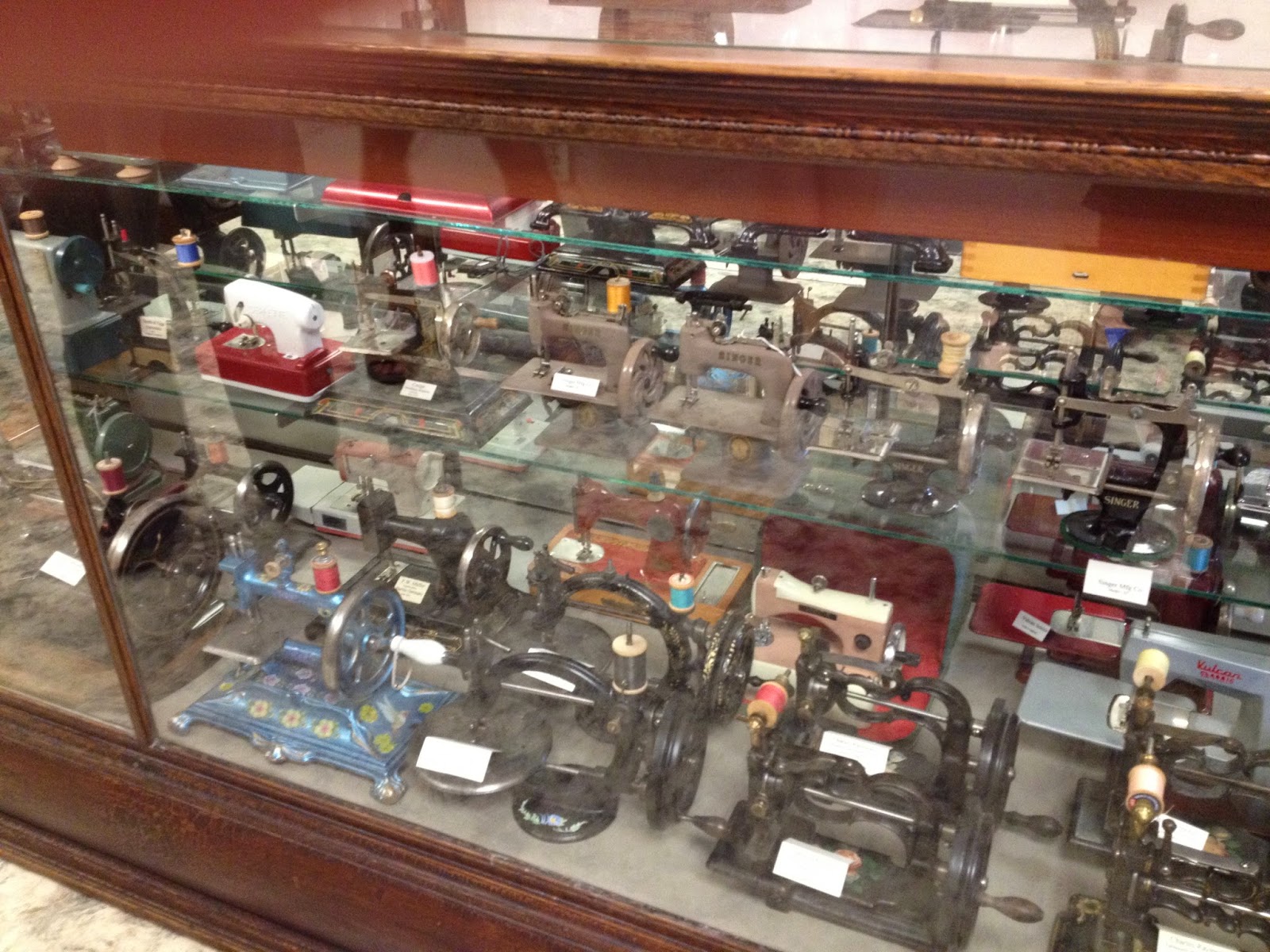 There was even a very rare 1866 version of a CANADIAN made machine by G.W. Gates Company out of Toronto! The whole thing was about 10″ (25 cm) long. It is a hand crank, capable of sewing a chain stitch. Yes, it still works! 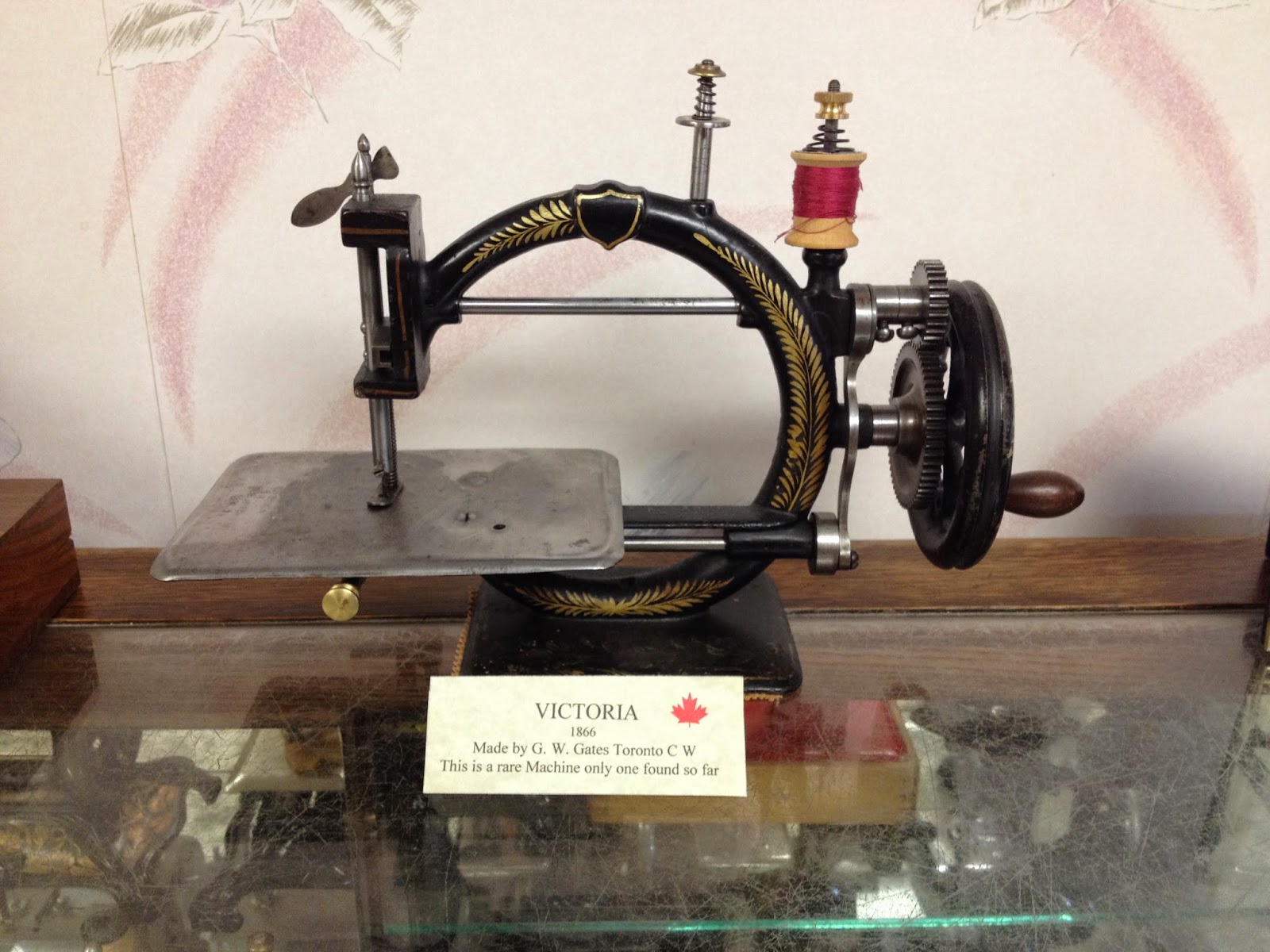 Here’s a Moldacot machine (Germany) made for travelling. When people traveled in the late 1800s and early 1900s, they often went for many moths at a time, so having a sewing machine along was a must. This one takes very little space. 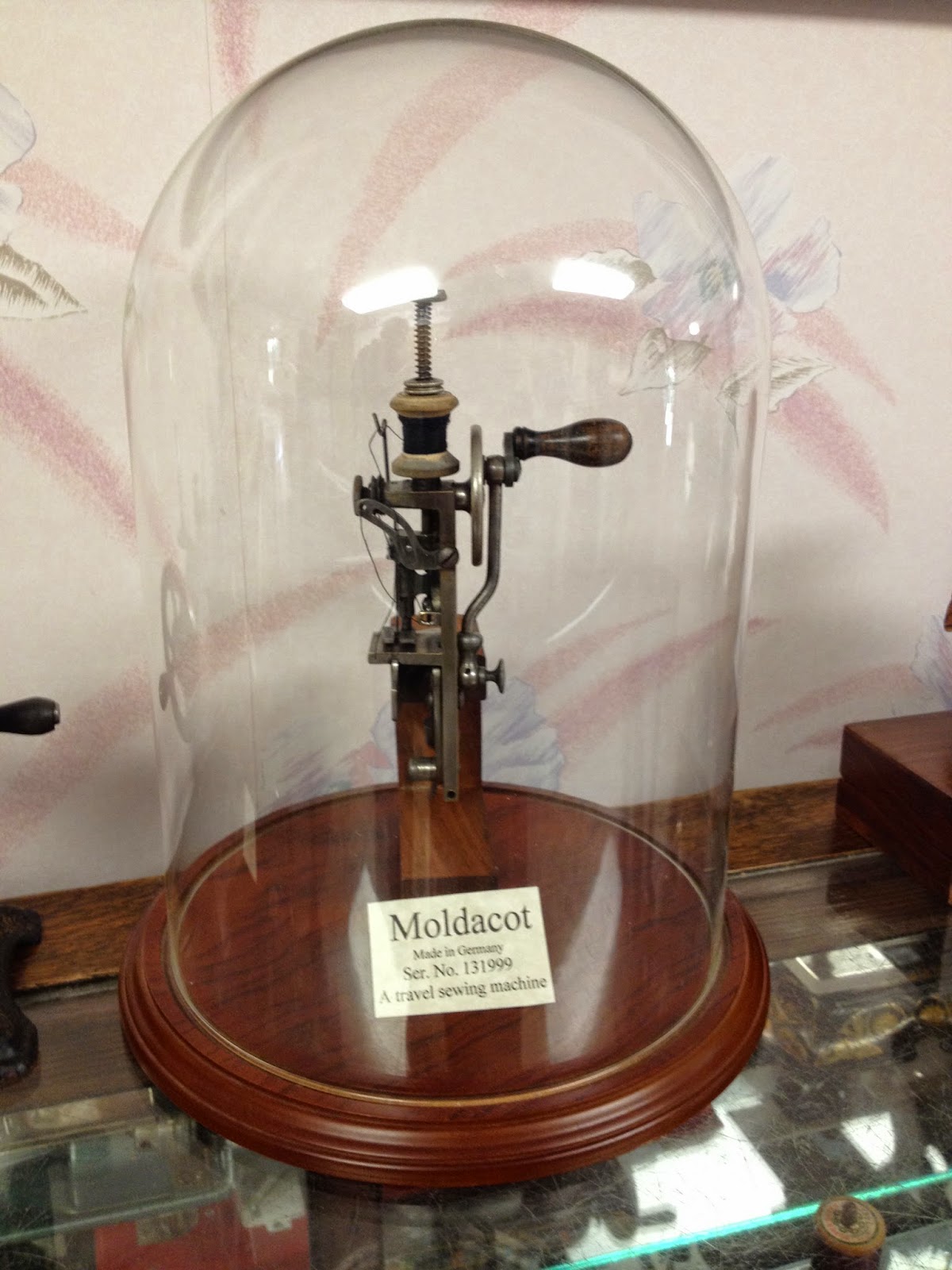 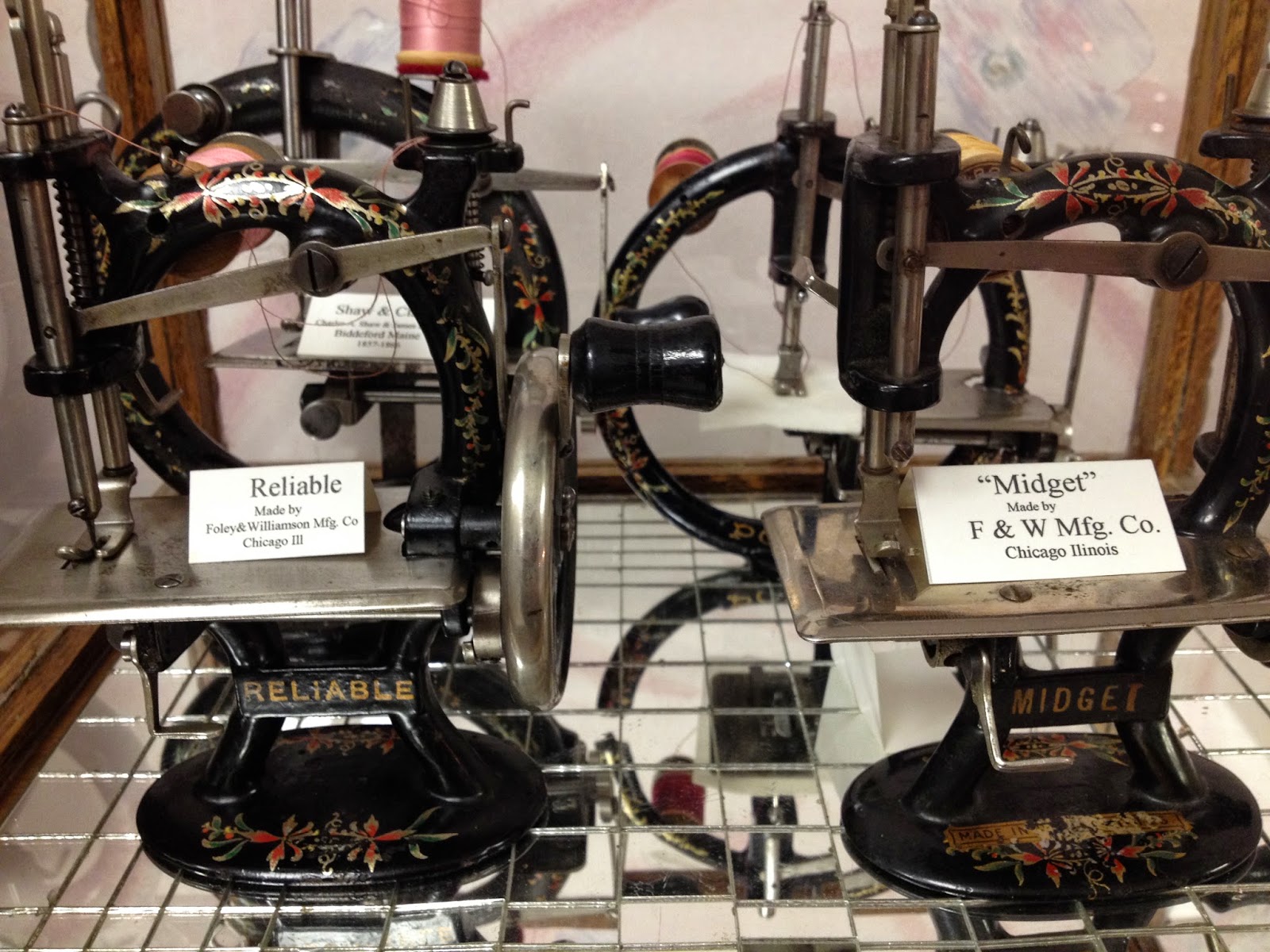 Collectors often collect anything that closely resembles the object of their attention. In this case, this sewing machine is actually….can you guess? It’s a wine bottle! It pours from the thread spool! 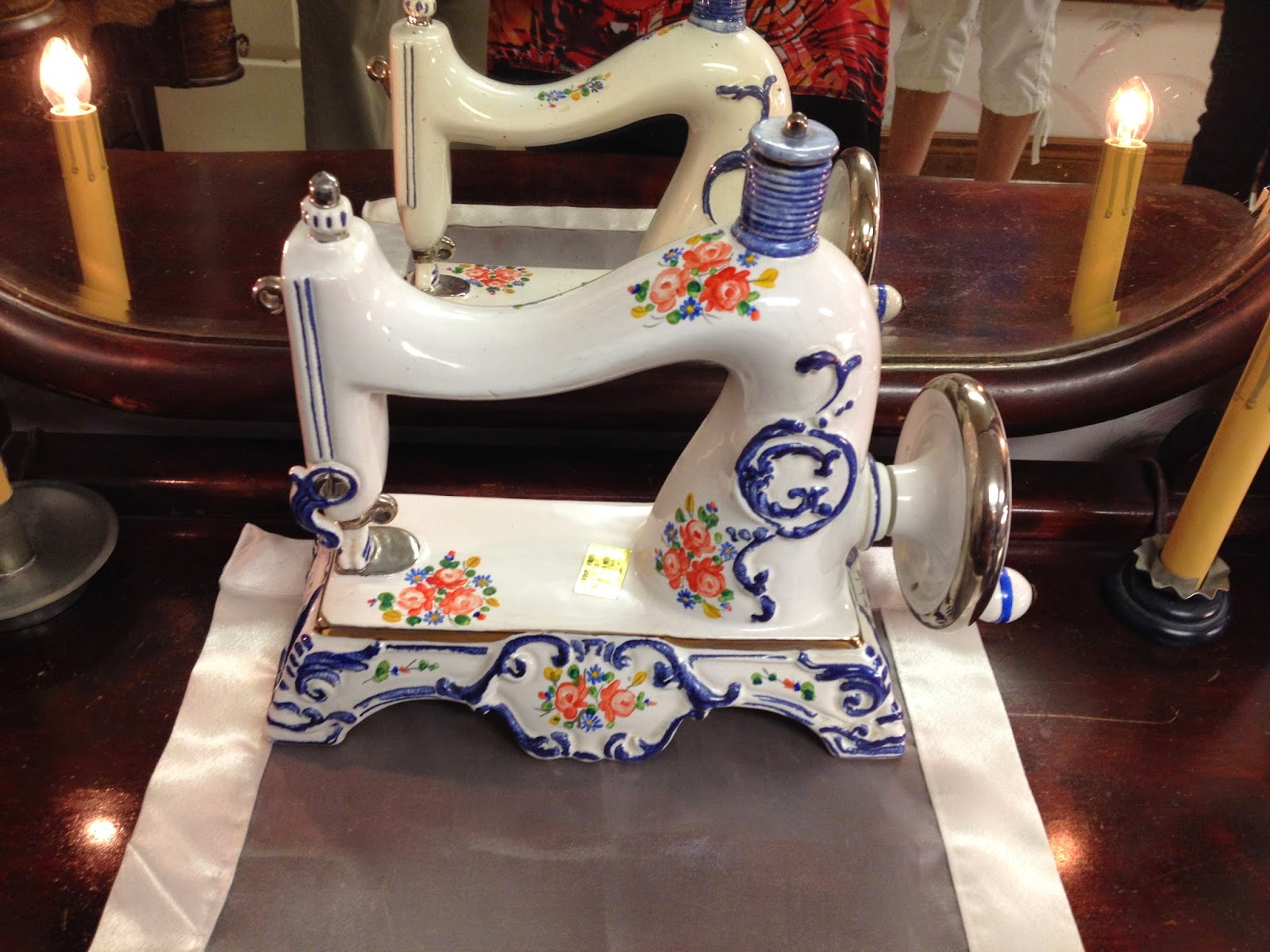 We moved along to the front foyer. Machines are tucked in spaces everywhere, but yet, nothing looks crowded or out of place. Look at the detail in the wood working on this sewing machine case! 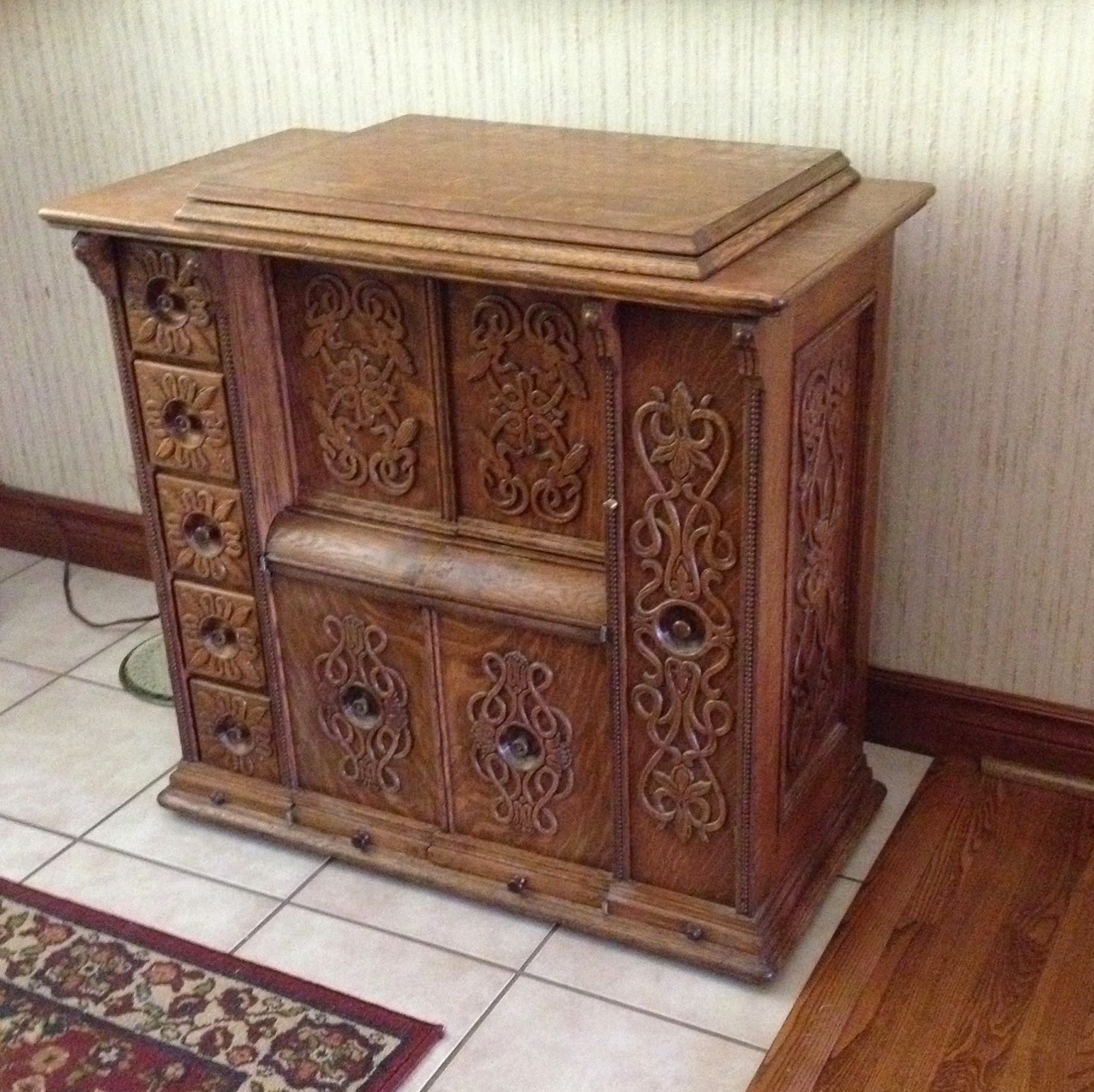 It opens up to be a very practical sewing area, with room for the feet on the treadle inside! 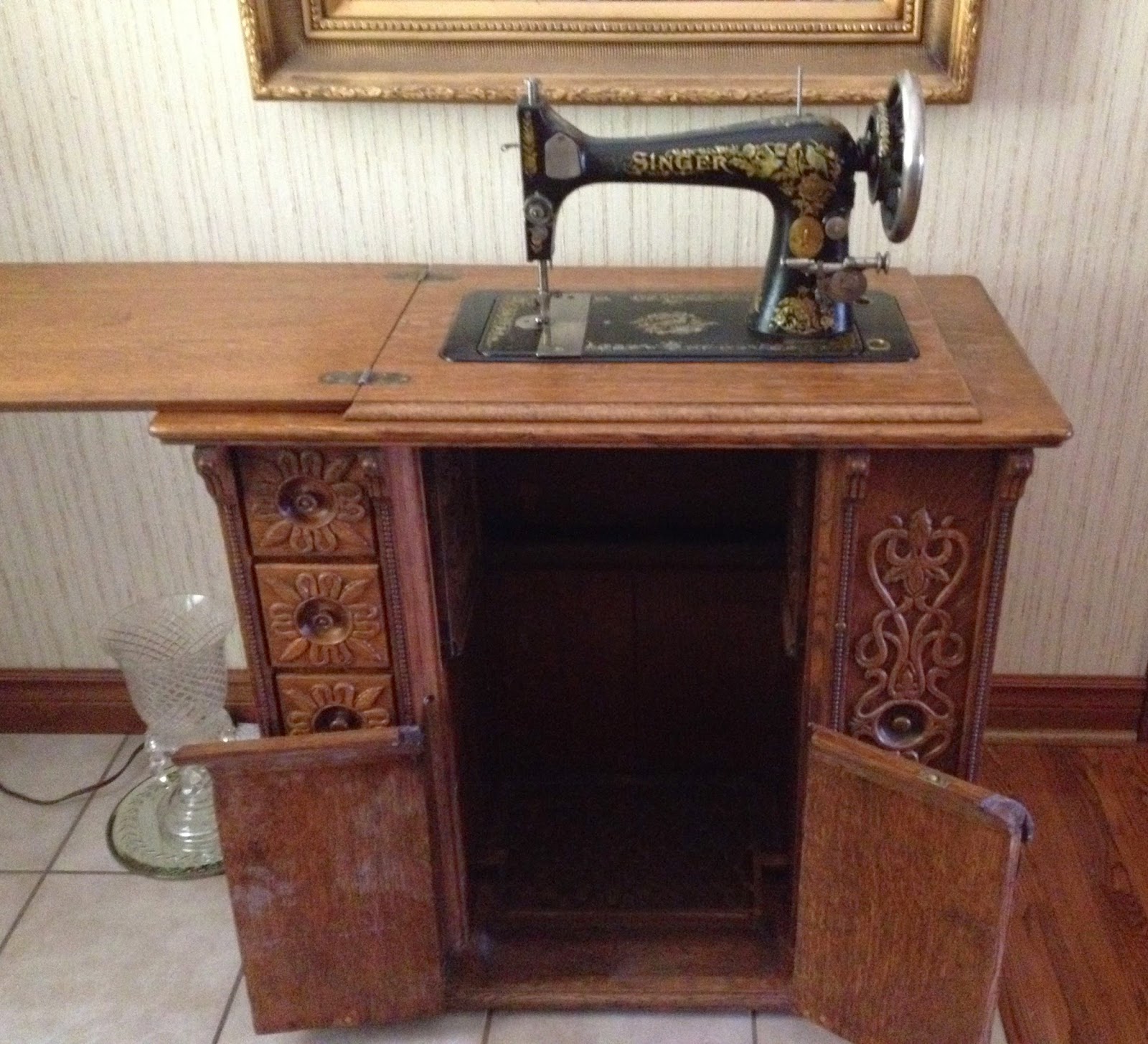 Then we went downstairs to the real display rooms! In the stairwell was a quilt with machines embroidered on them using the chain stitch machines. The Blackwork style stitching was done so the chain stitch shows on the right side of the fabric. 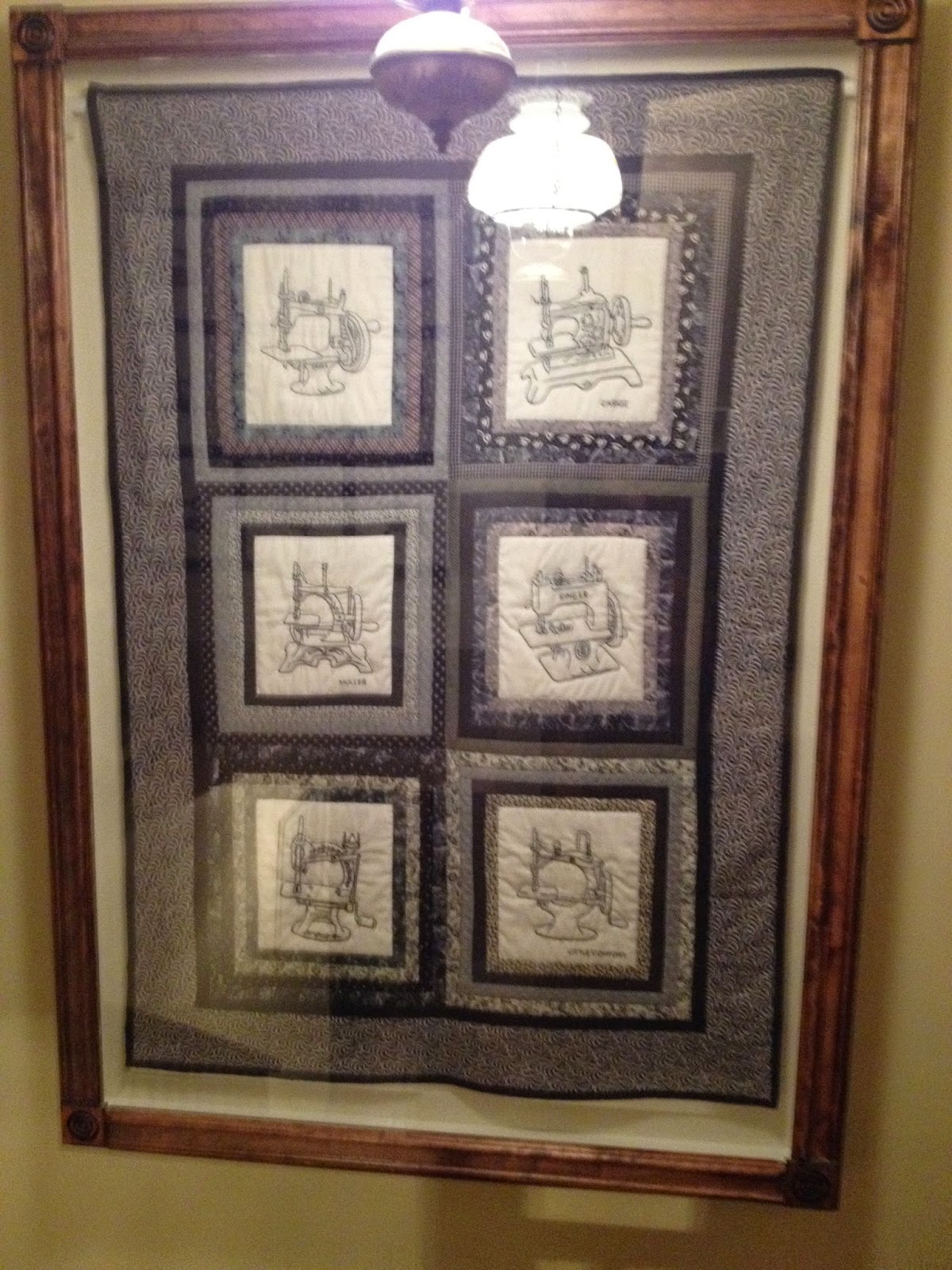 A picture of the MAN himself, Isaac Merritt Singer. He was originally from Germany and shortened his name to Singer from…Kissinger. He was a Shakespearean actor in his early life. Who knew? He had 5 wives in his lifetime, and 29 children. It was good to hear that he was financially responsible for all 29. No deadbeat dad there! 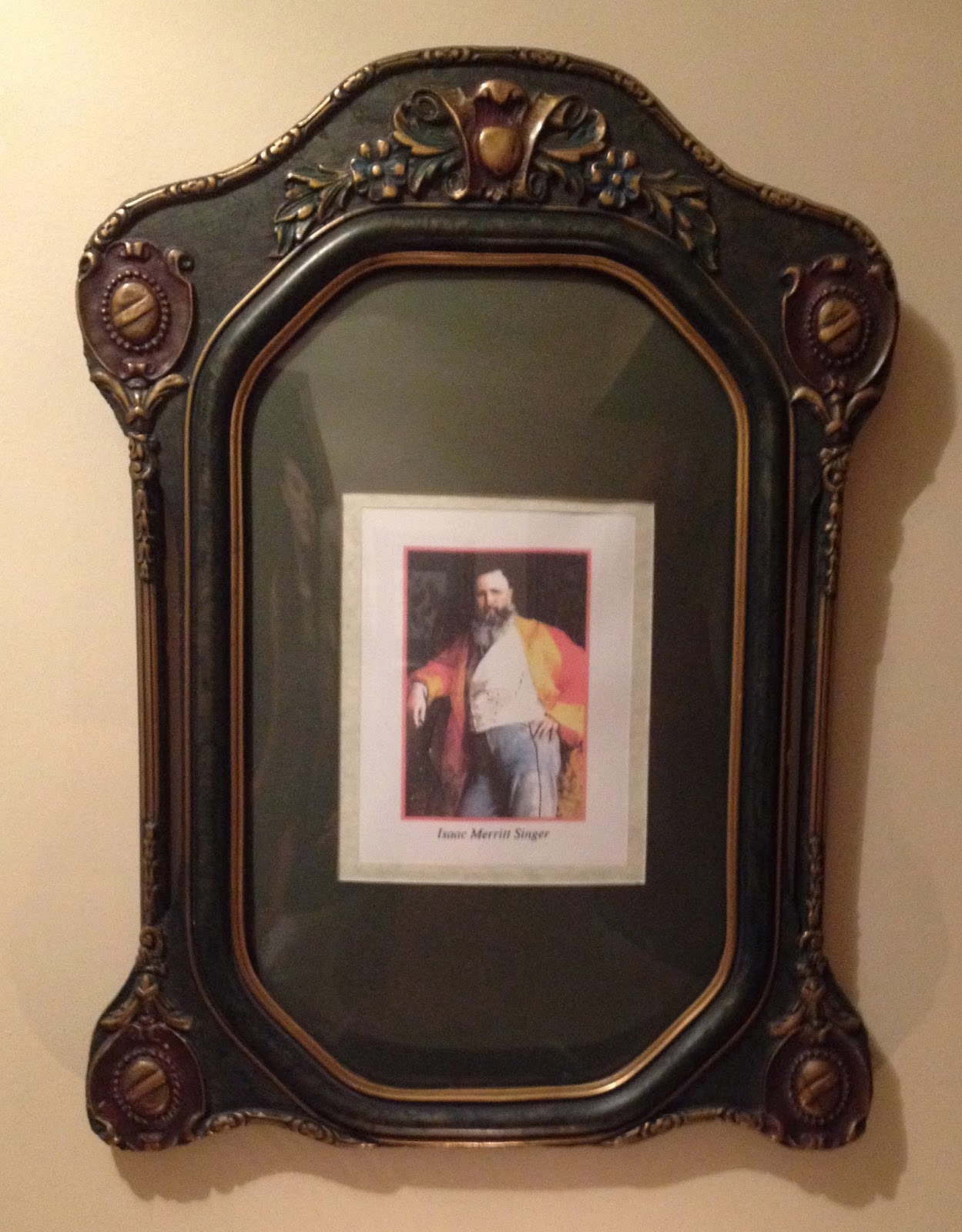 Along the hallway to the display rooms, there are vintage advertisements for machines in wooden frames.  Look at the ad for this Elna! 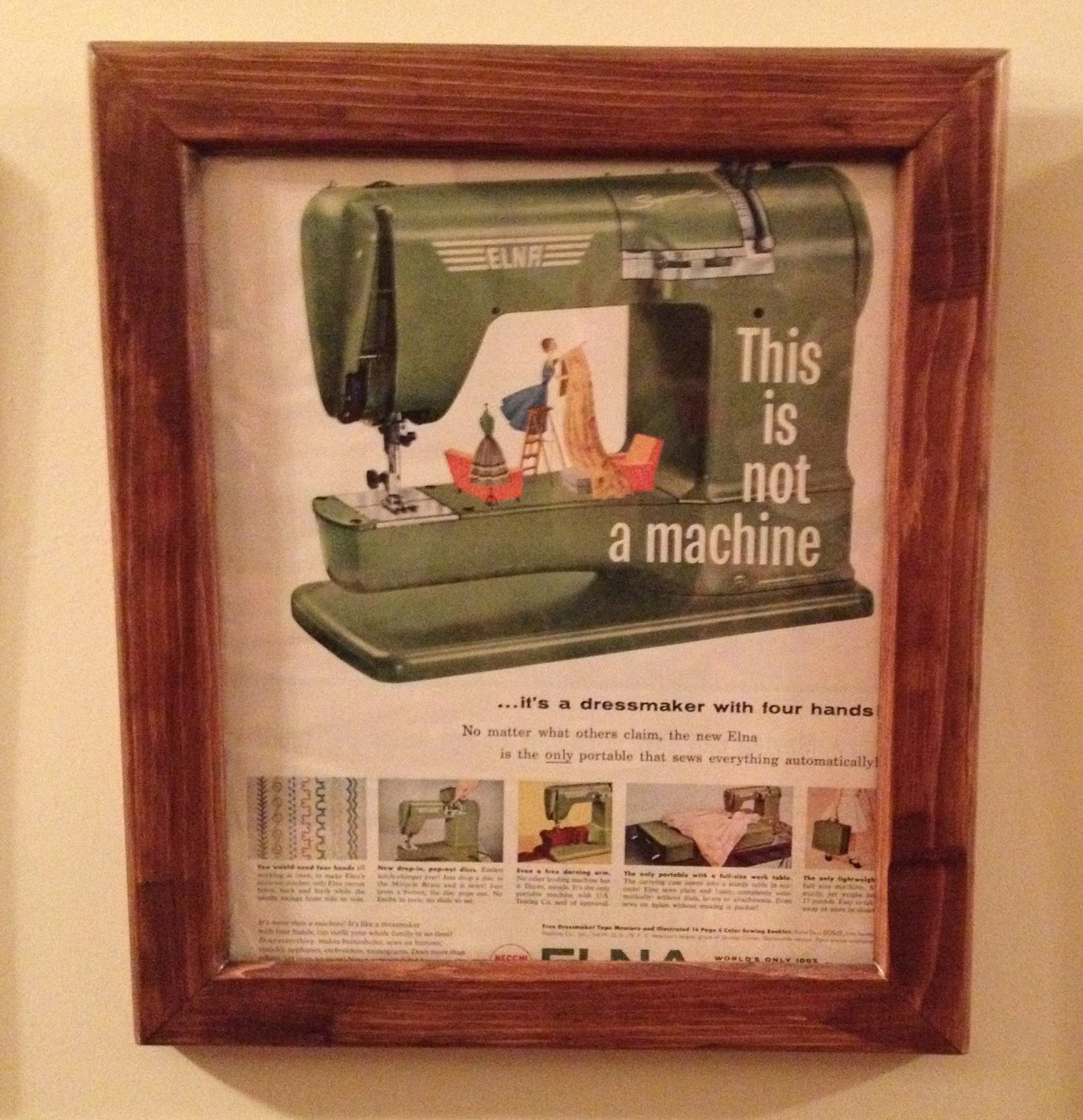 This one is near and dear to my heart. I bought this Singer Golden Touch & Sew in 1972, as a university graduation gift for myself. I remember it was housed in a pecan wood cabinet. Total cost…$900, a HUGE sum in the day. 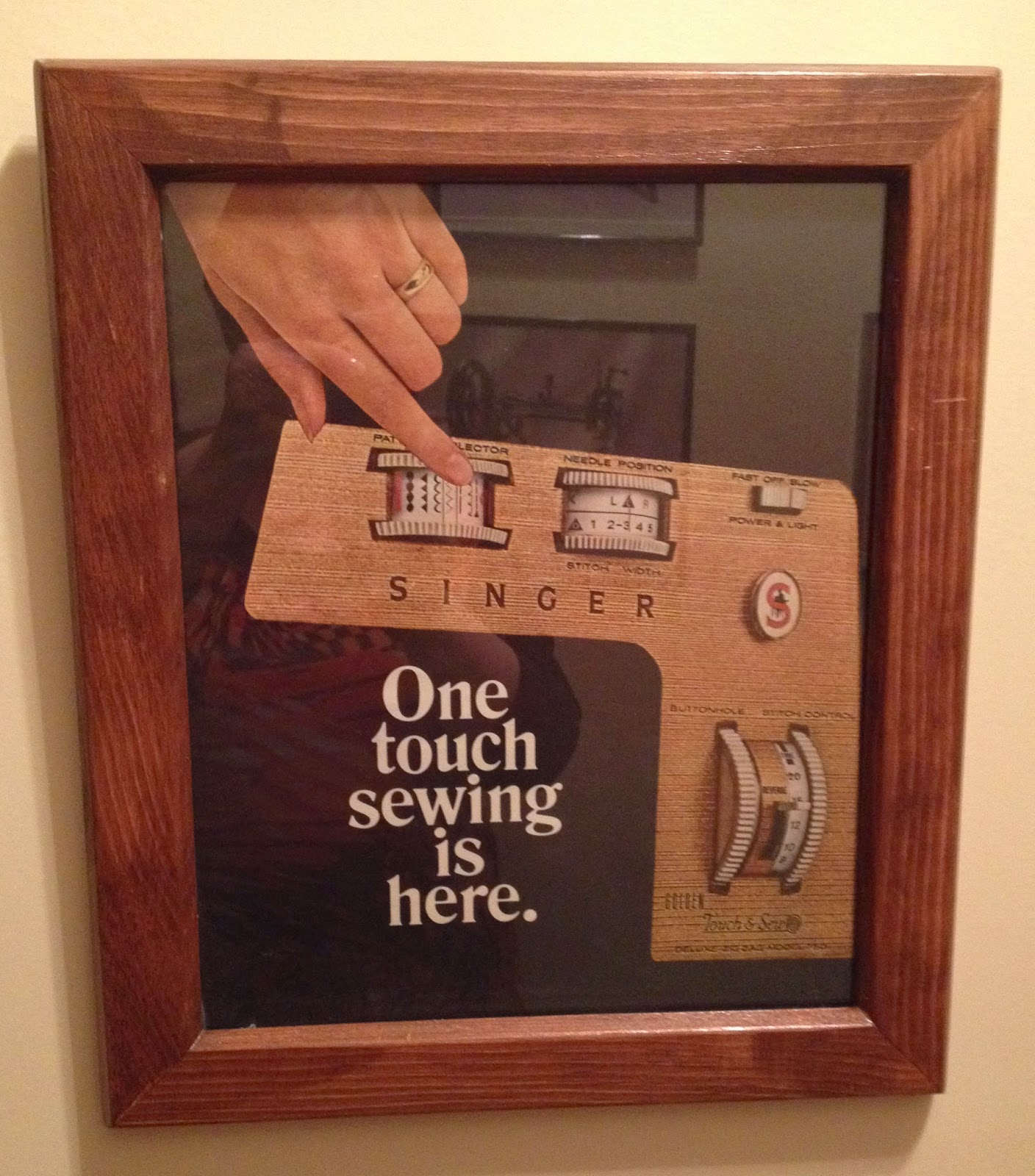 Here is one of the display rooms, with over 30 machines inside! 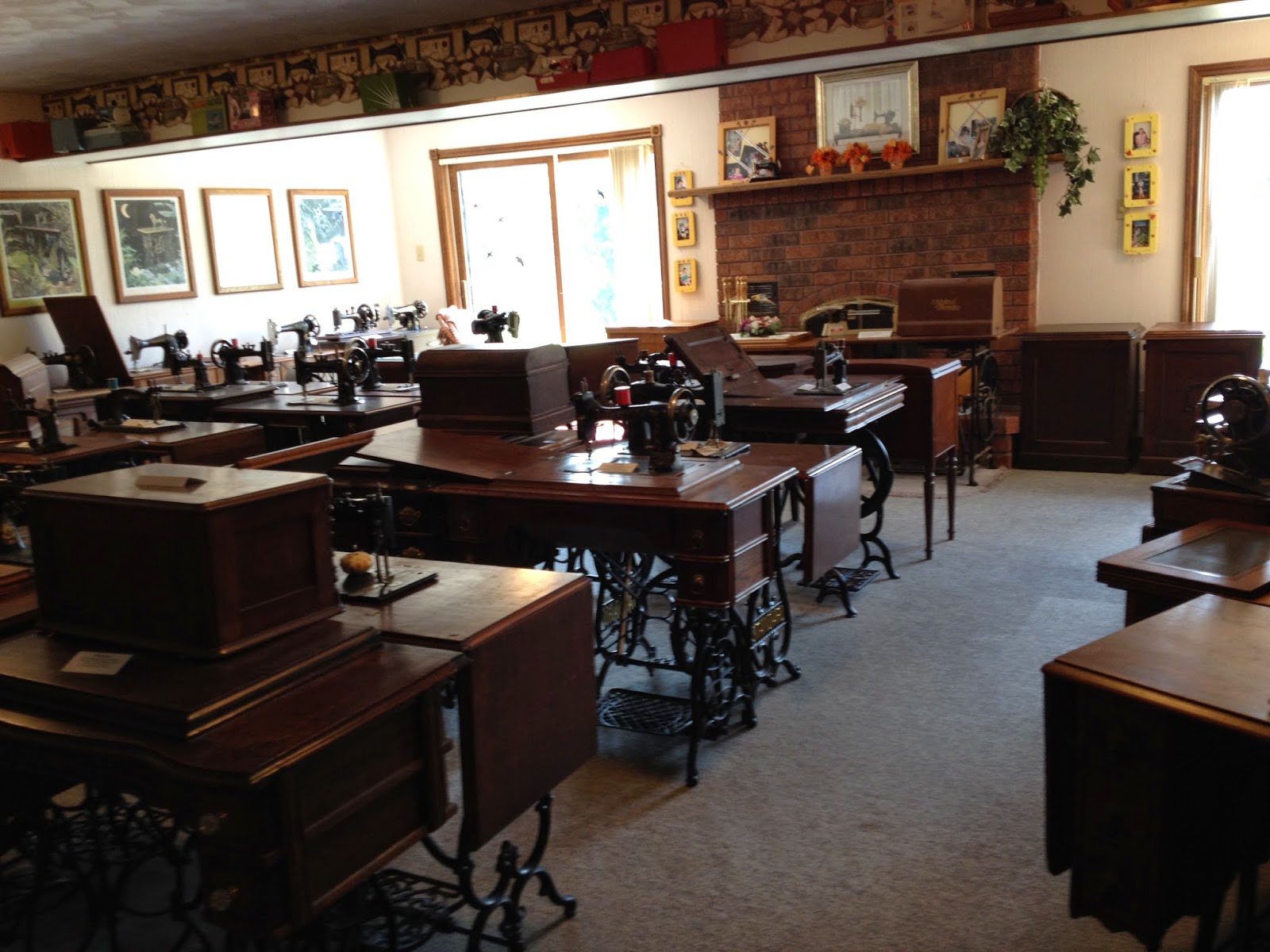 Elias Howe made sewing machines too, and he even put his own portrait on each one. Look at the mother of pearl inlay work! 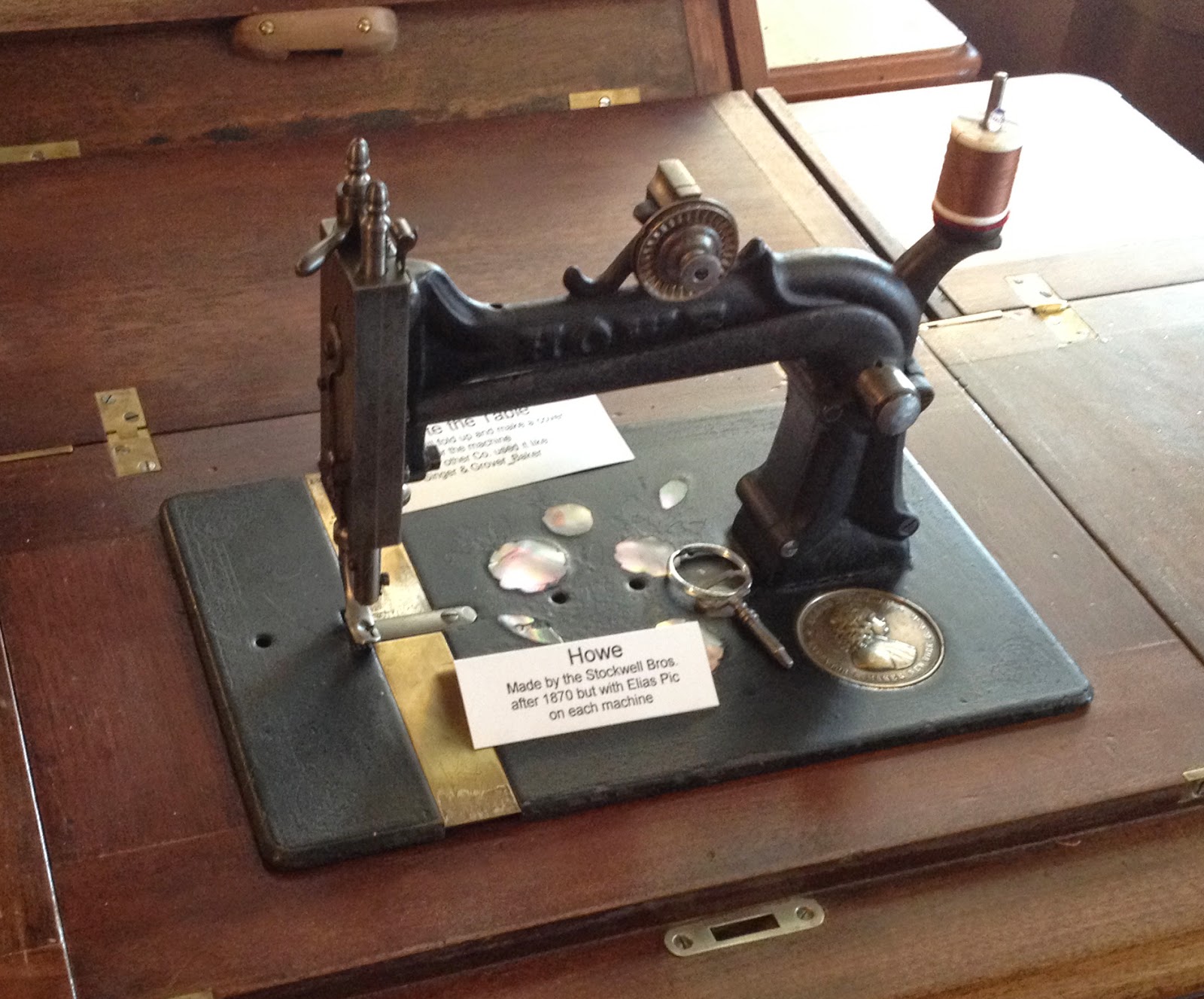 Another quilt with embroidered sewing machines hangs on the wall. At Sew it Was, everything in the house is somehow sewing machine related! That’s part of Rebecca in the photo. I guess I wasn’t fast enough with the camera! 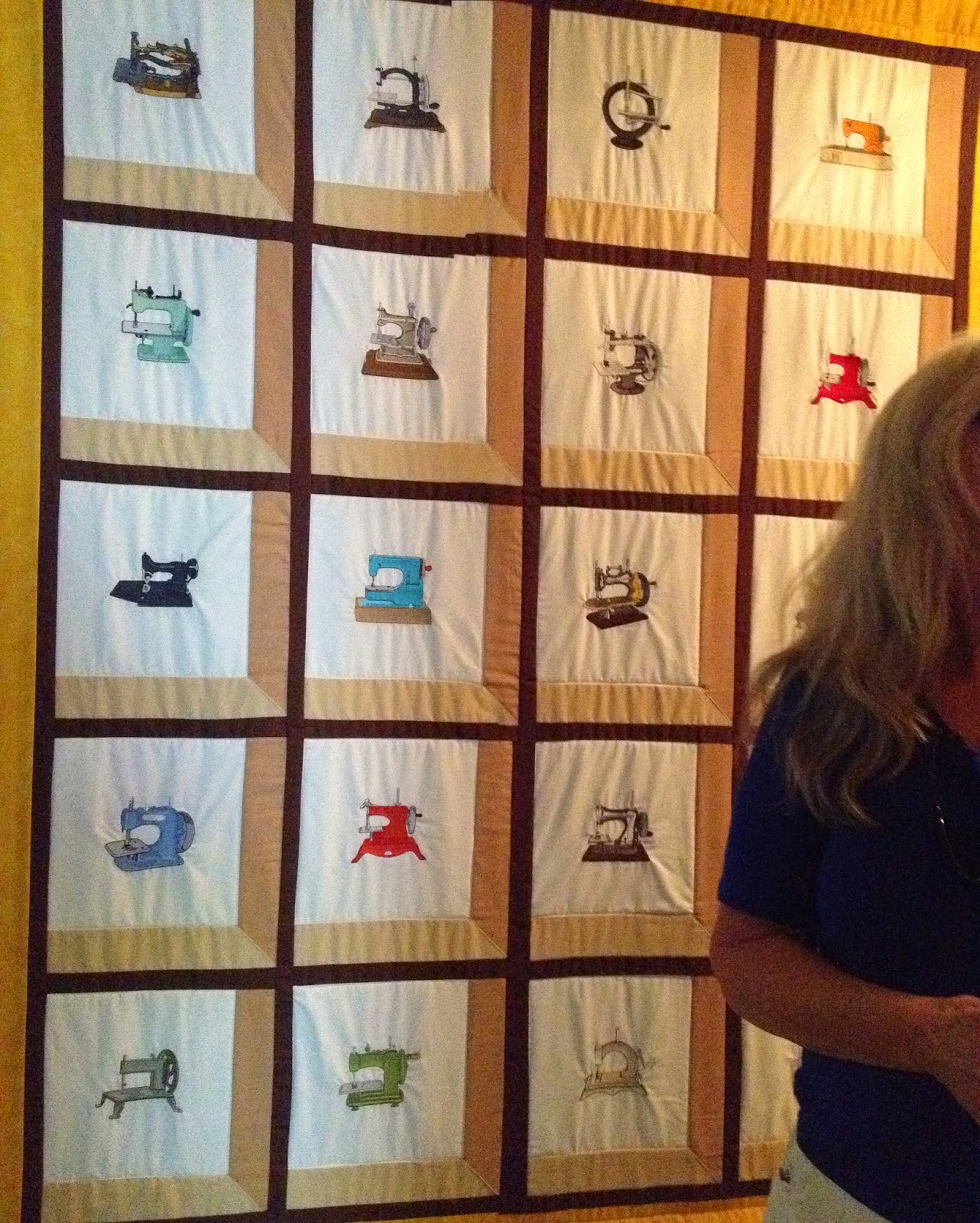 In the second display room, we saw even more machines! Here was a Necchi made in Italy starting in 1922. Sophia Loren (Italy’s most famous daughter) was featured in the company advertising in 1959! 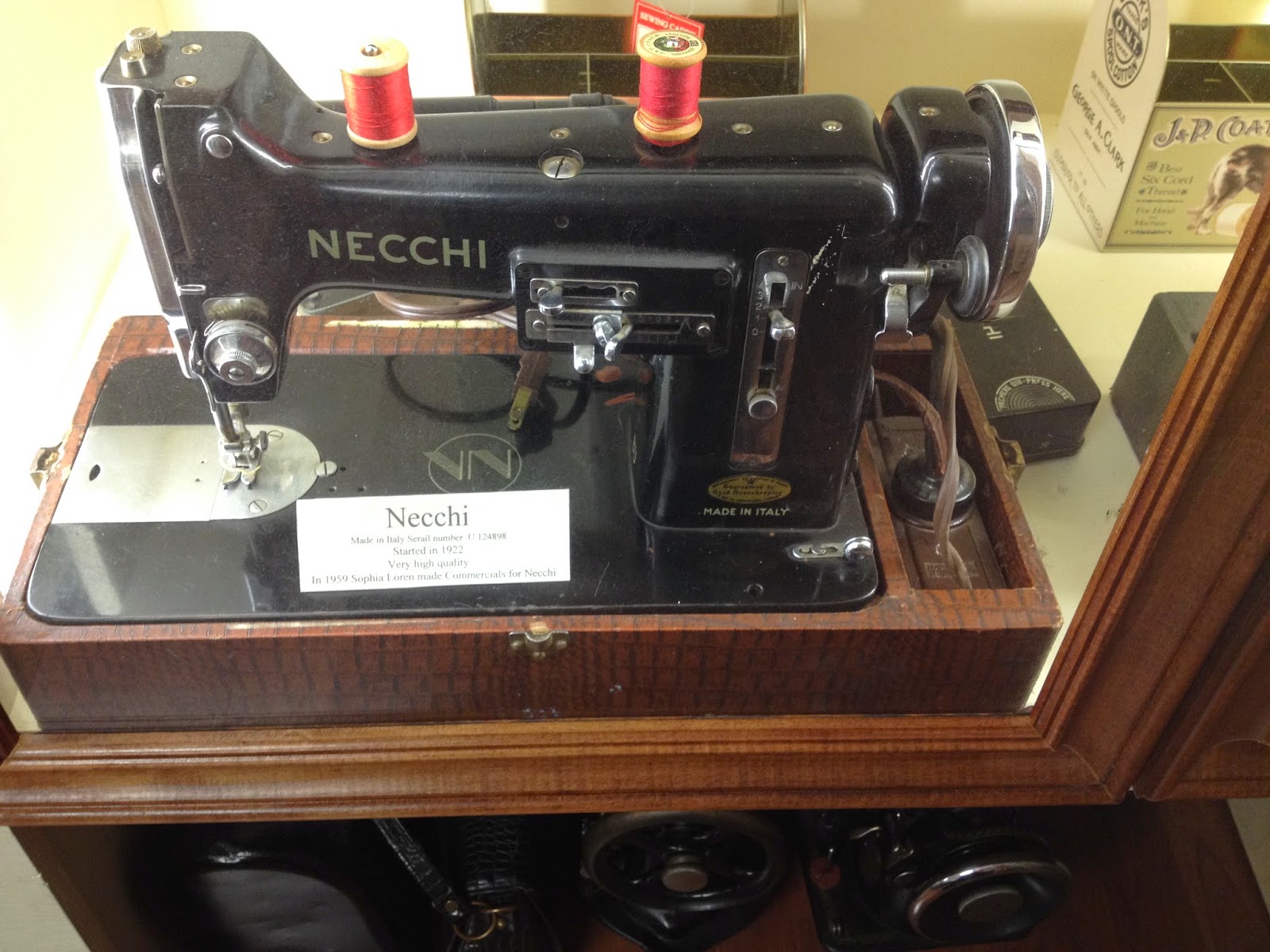 This machine was the machine that started it all for Carl. This is the same machine that his mother owned and she let him sew on it in 1952 in Germany when he was just five years old. He knew then that sewing would be his life’s work. 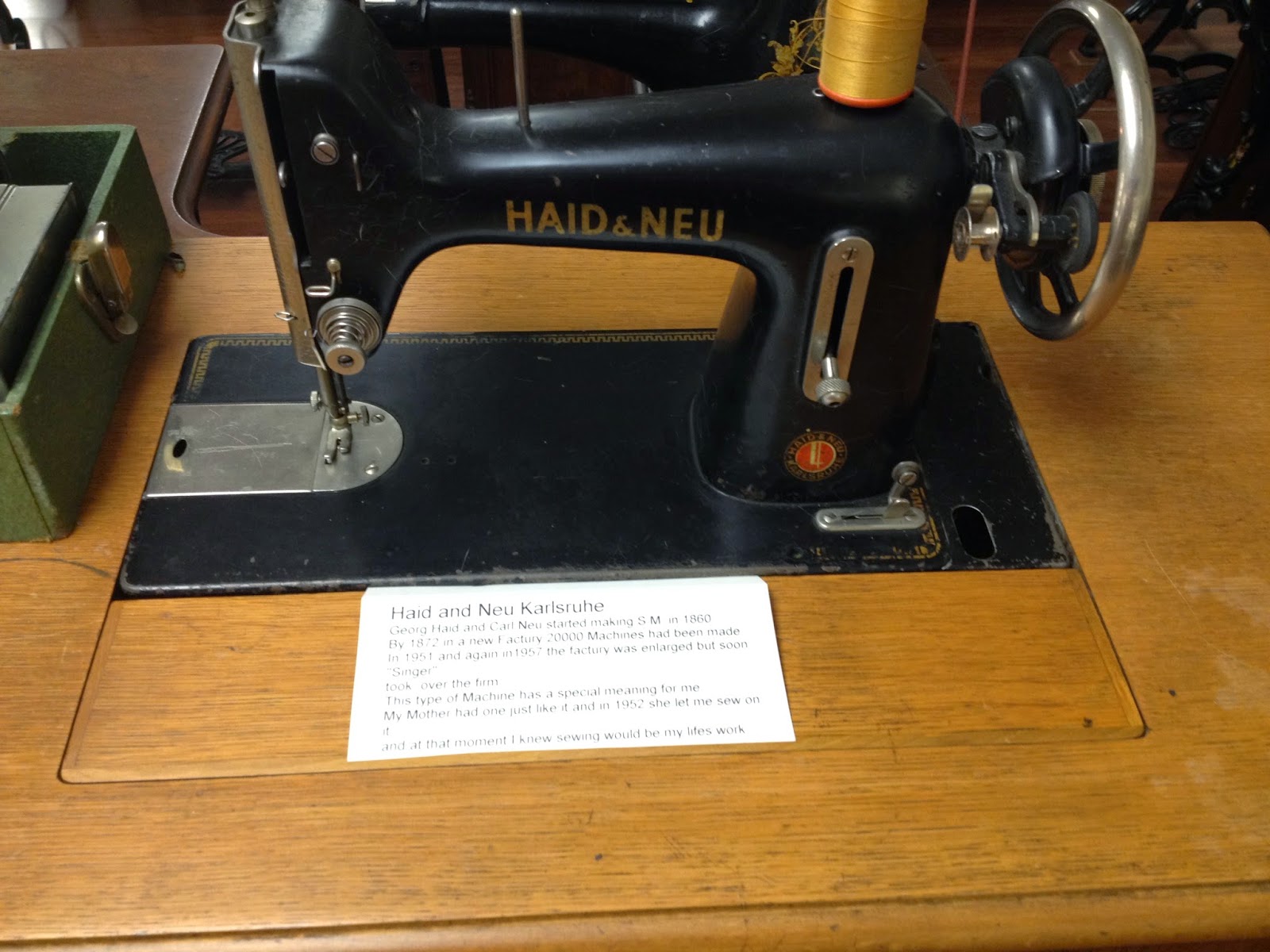 This is a very rare machine. They know of only 4 in existence, so I feel fortunate that we were able to have this one so close to us! This is a Wanzer, in manufacture from 1859-1890. 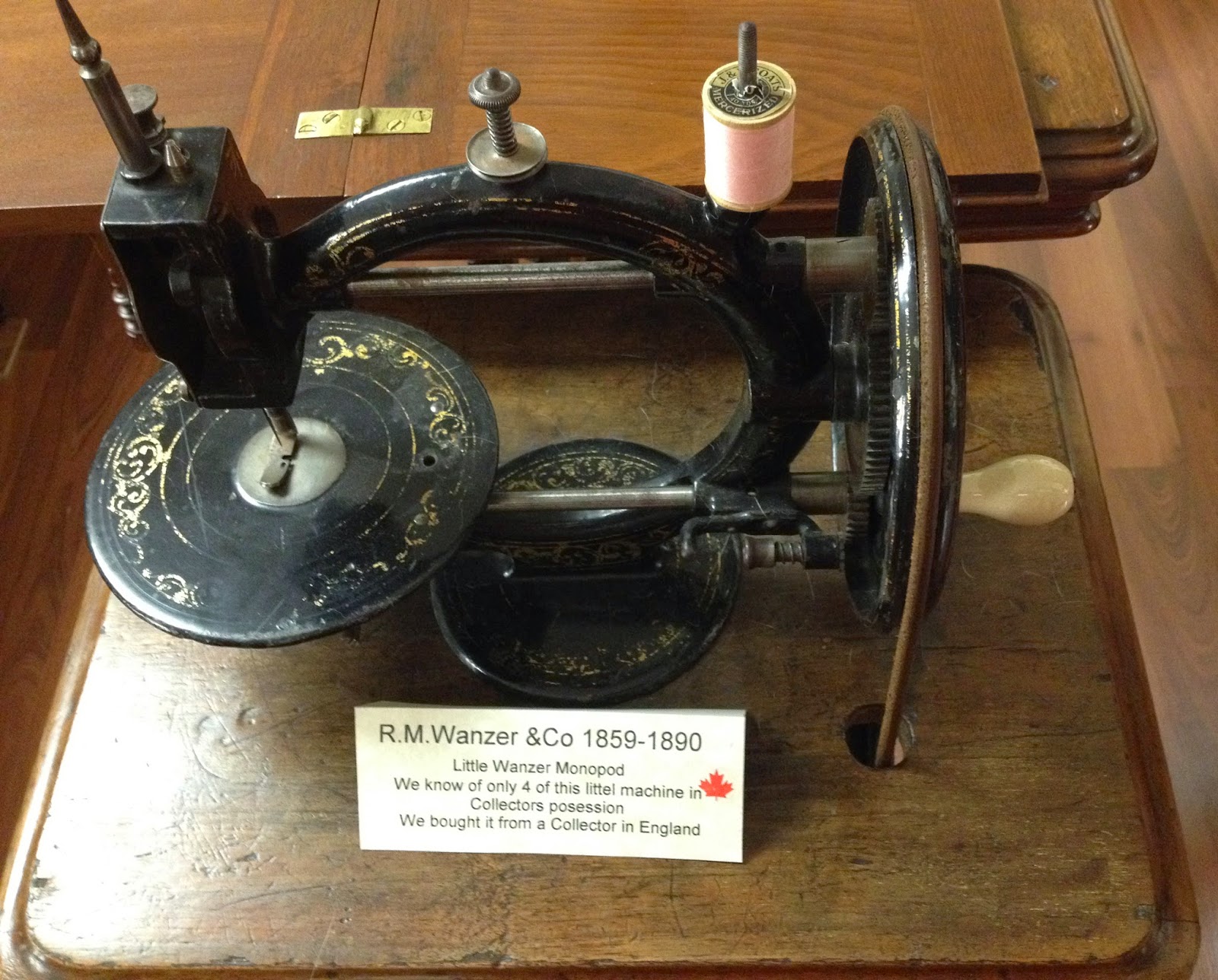 What I liked best about the Wanzer was the little foot shaped treadle! I felt right at home as mine were the only feet that fit into the 8″ (20 cm) foot spaces! 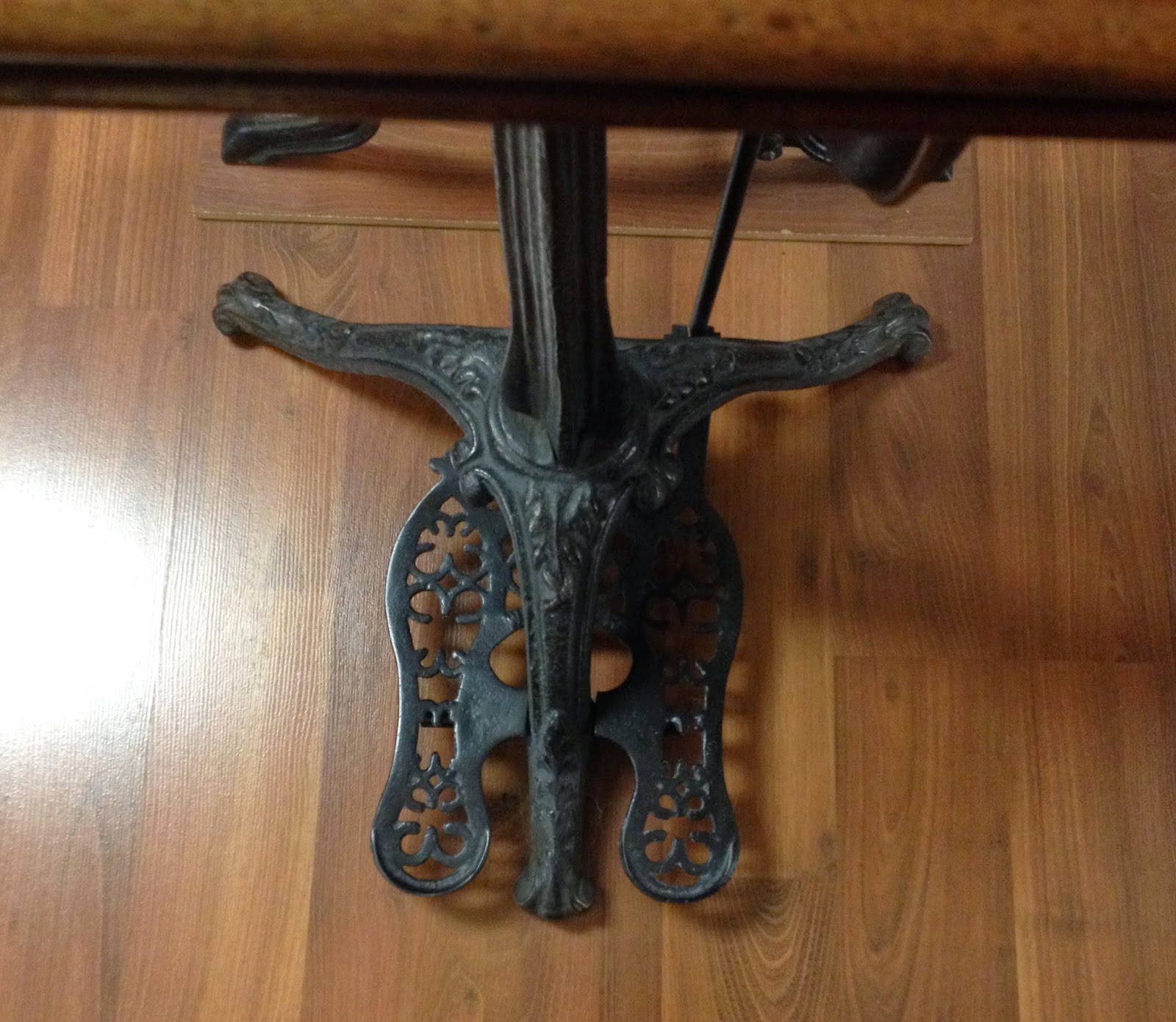 What a wonderful place to absorb all this history! Carl and Joan at Sew it Was couldn’t have made us feel any more welcome. I feel blessed to have been invited to their home and take this walk down memory lane!
If you have a chance to visit, I assure you that visitors are welcome. The name of the museum is Sew It Was, and they can be reached by email ahead at sewitwas2009@hotmail.com
August 9, 2014/6 Comments/by Beverly Johnson
https://www.braandcorsetsupplies.com/wp-content/uploads/2014/08/Sew-it-was-feature.jpg 1327 1600 Beverly Johnson https://braandcorsetsupplies.com/wp-content/uploads/2017/01/BMS-Website-Logo.png Beverly Johnson2014-08-09 23:06:002016-08-01 17:39:25Once Upon a Time and Far Far away – Sew it Was

Once Upon a Time – Vintage Gold Swimsuit
6 replies