You are here: Home1 / Life of A Fairy Bra Mother Blog2 / Behind the Seams3 / Corsetry4 / Once Upon a Time – Waist Management

Today Judy, Rochelle and I went on a road trip to see an exhibit called Waist Management – a history of unmentionables showing at the Peel Region Art Gallery, Museum and Archives (PAMA) in Brampton.

We paid the admission fee of $3.50 (I am a senior now I guess!) and moved into the exhibit rooms.The exhibit itself was housed in two rooms and a hallway, but despite its small size, was very impressive from a quality point of view. Most of the things were Canadian and almost all of the garments, I wrote about in the Bra-makers Manual in the History of the Bra chapter. It was extremely self-satisfying to see the things I wrote about in the flesh, so to speak. 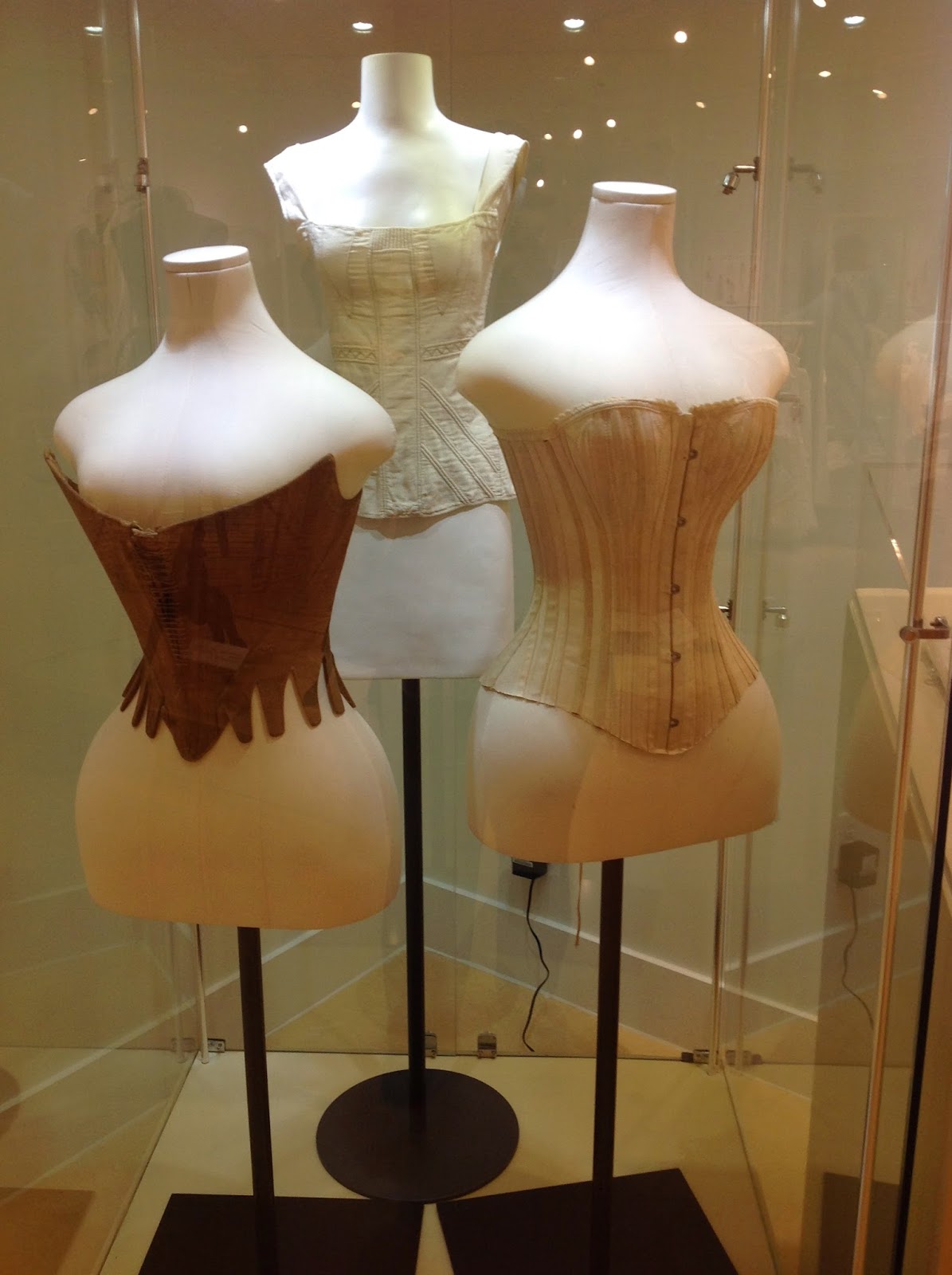 This ballet pink below-the-waist corset, unusual for its colour (girdles were take-it-or-leave-it-white!) but also the design is clearly the ancestor of the girdle we came to know and love in later years. There is a centre front busk and two adjustable lacing panels with a godet underneath, but notice the garter attachments – each is attached on either side of the laced godet, and the garter clip suspenders on the elastic. The elastic was obviously industrial strength, as it measured over 1″ wide! 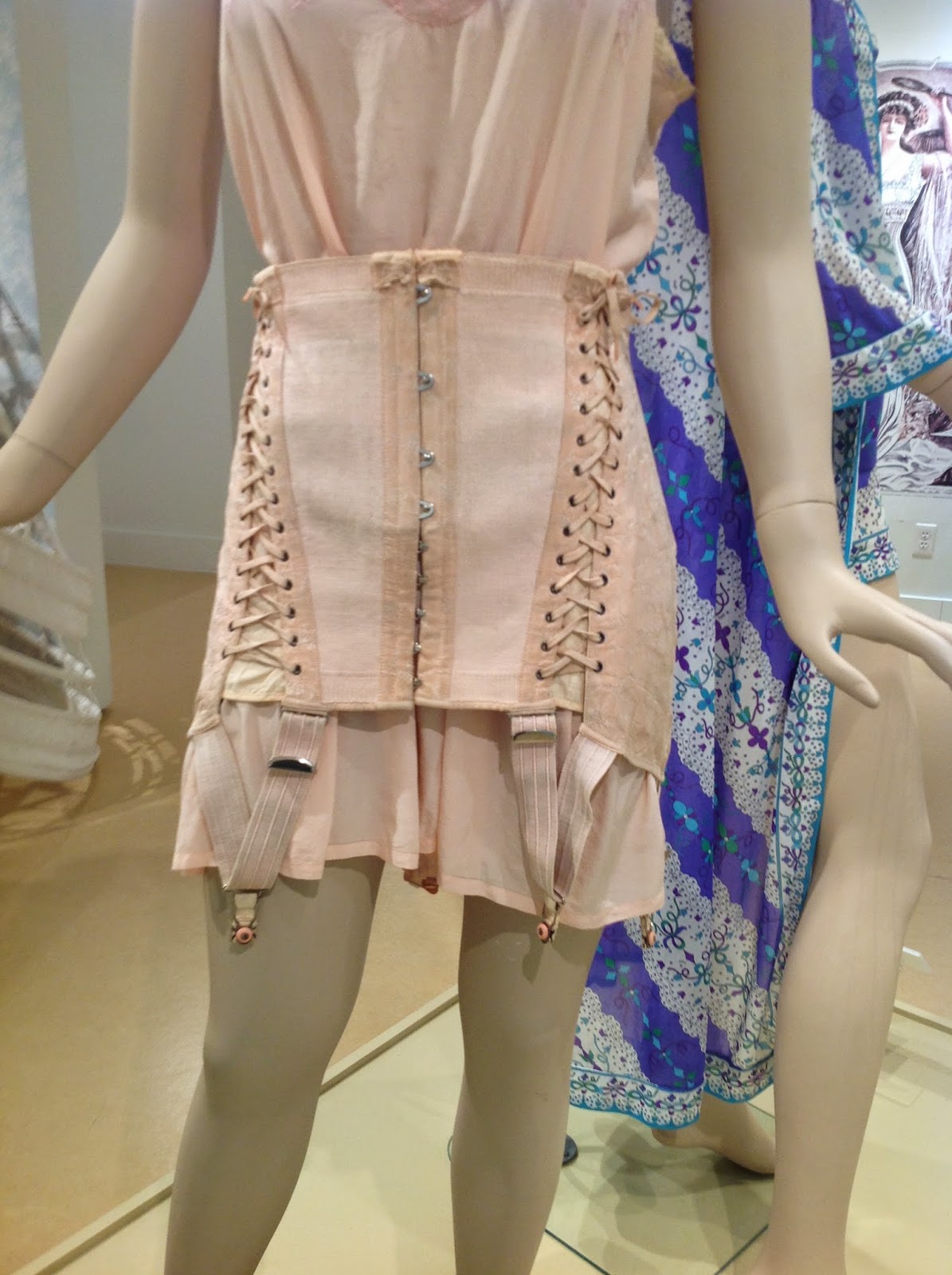 Here is a close up of the stitching of another corset. Rows and rows of machine stitching with tiny cords inside to add stiffness. Also two hip panels, the back one has lacing which allows you to widen this area if necessary. Notice the laces are tied to the inside so they won’t show under clothing.  The second one at the side seam has a contrasting fabric set in. Notice also the tiny decorative stitching on the forward hip! 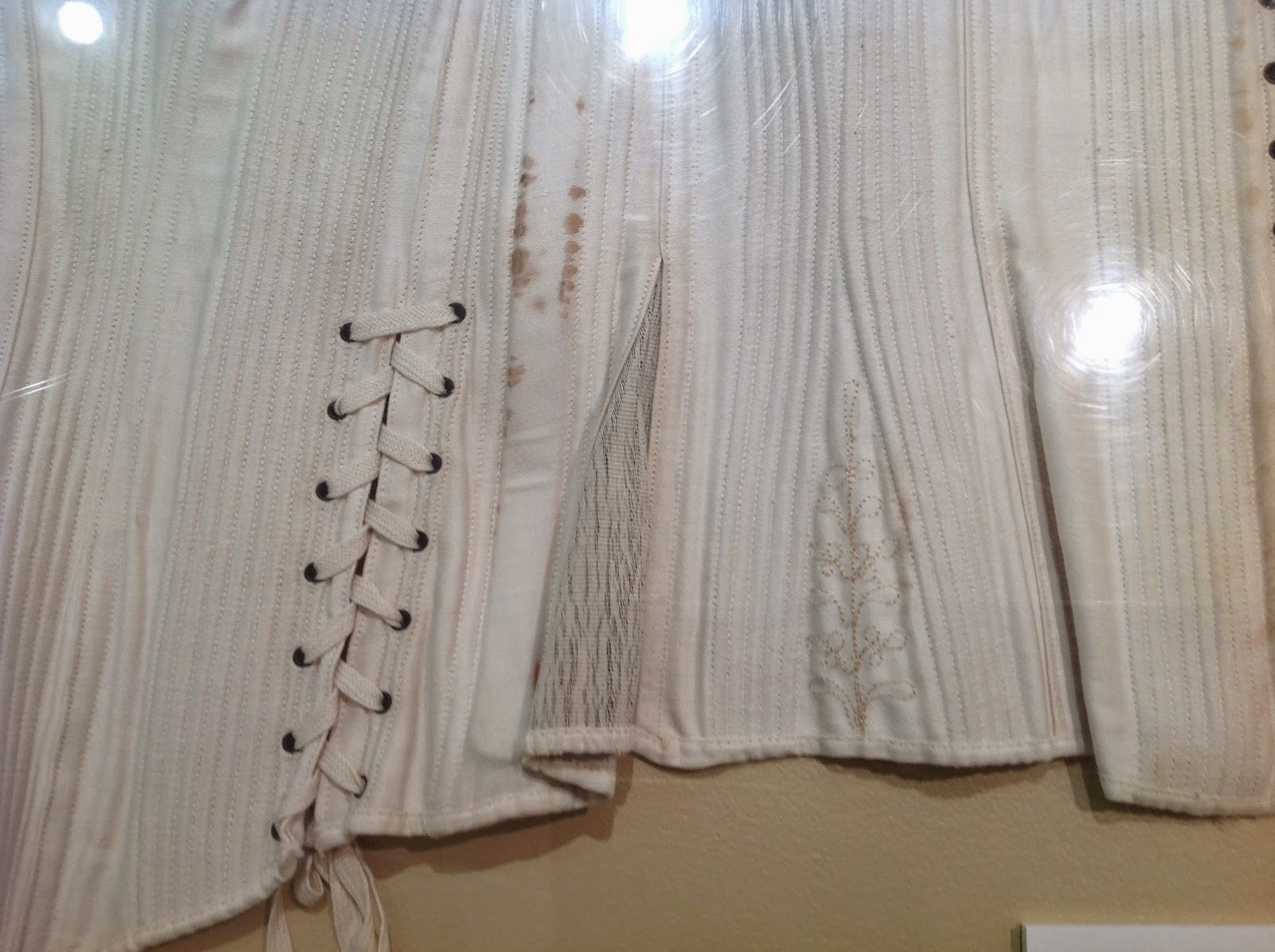 Here are some bust pads from the 1890s. They were stuffed with horsehair! Can you imagine how itchy that would have been, or what it would smell like if it (God forbid!) got wet? There are also falsies from the 1960s, which I remember well  from my days of custom sewing for others. 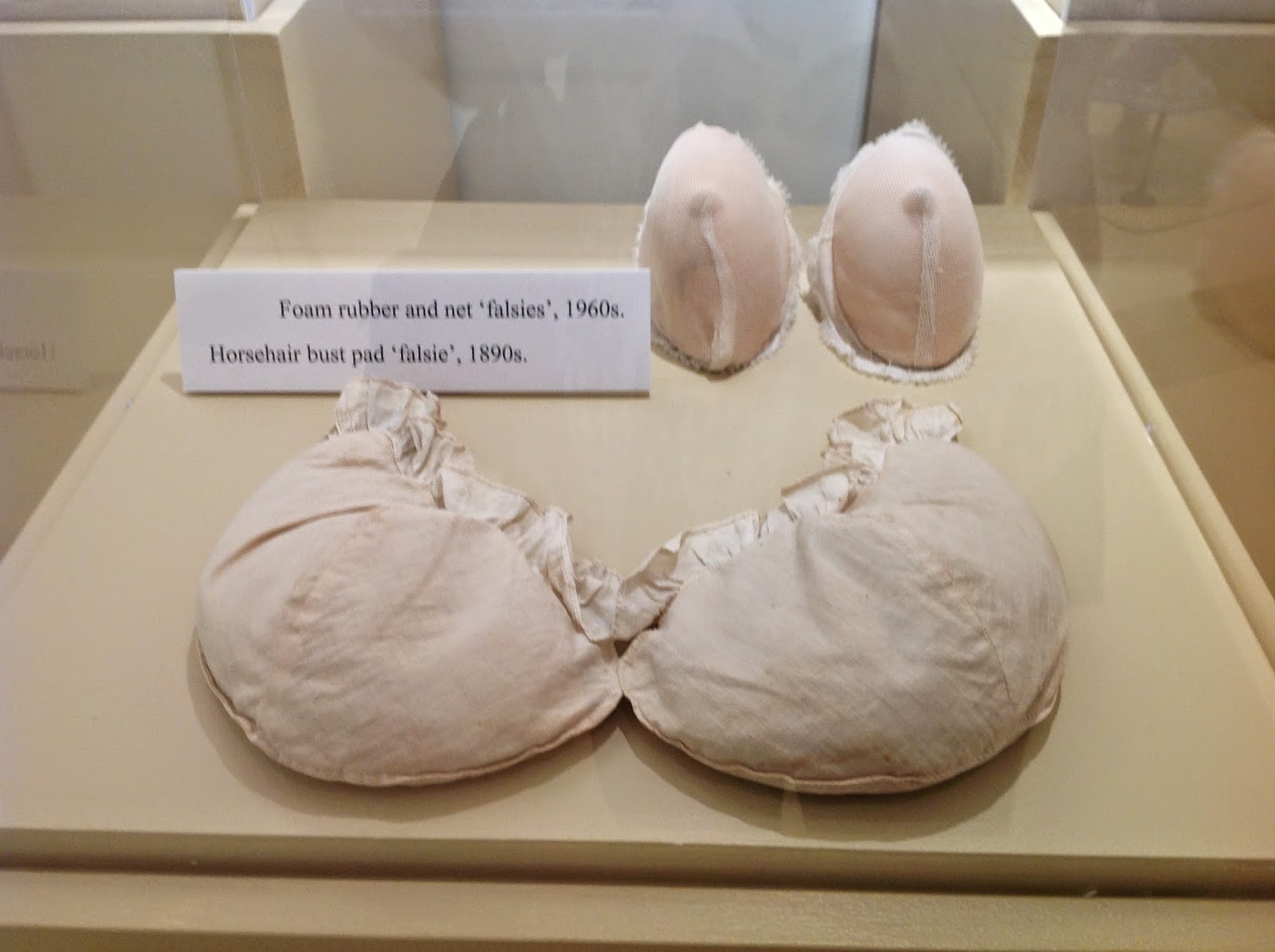 Here is a “health” corset which made an appearance in the early part of the 20th century. Lots of bones, and straps that fasten with safety pins (now rusted!). Definitely some waist management going on here! 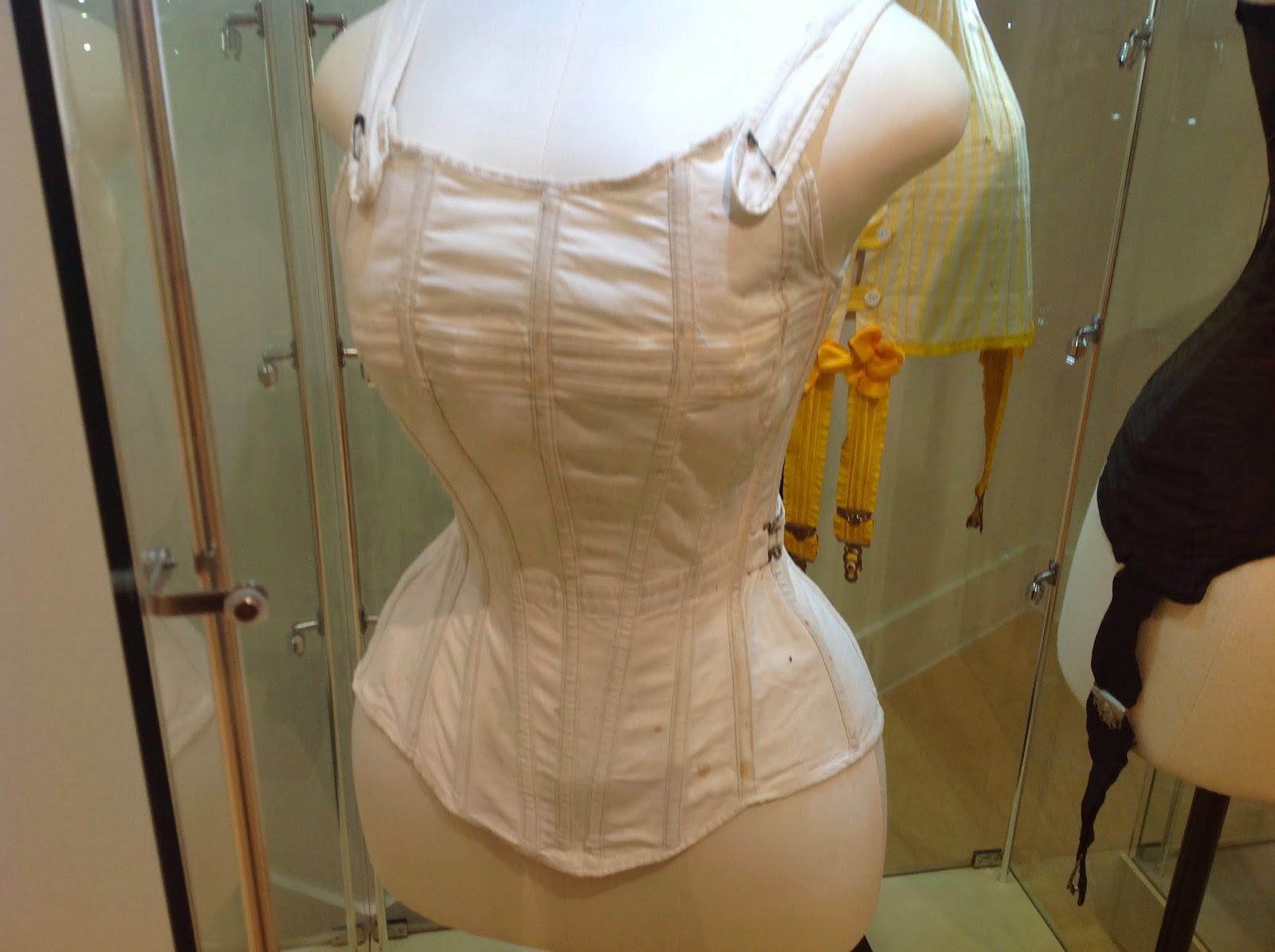 I also mention  “roll-ups” in my book. These all rubber girdles were impossible to get on except by rolling them up and over your hips. The first versions rolled off the assembly line not long after Dupont developed a way to combine latex (the sap from the rubber tree) with stabilizing chemicals to produce an elastic (“lastex”) fabric. This new Lastex changed the intimate apparel industry forever.
Notice this roll-up has little holes. This was to allow the girdle to be more breathable. Apparently, you would have little rivers of sweat without the holes. However, the holes left marks on your body that looked suspiciously like measles spots, although in perfectly even rows! Here is the famous “Merry Widow” popular in the 1950s. It is hard to see but it has proper bra cups, underwires and garters. 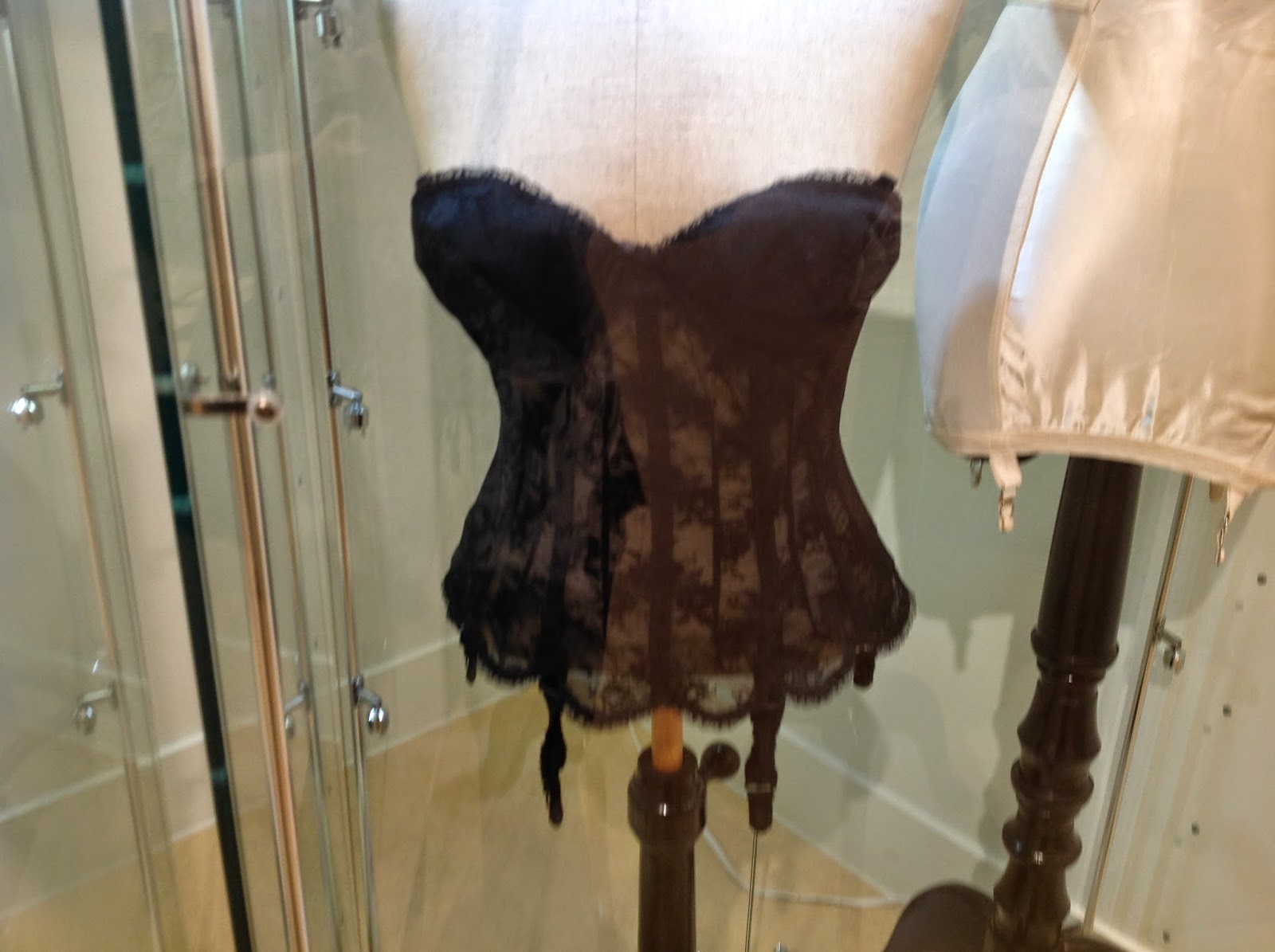 Here is a bra from the 1950s. Bras by this time had a bridge separate from the cups. The bridge was actually made from solid elastic, not stable like we use today. No self-respecting woman would ever leave the house without a girdle on! 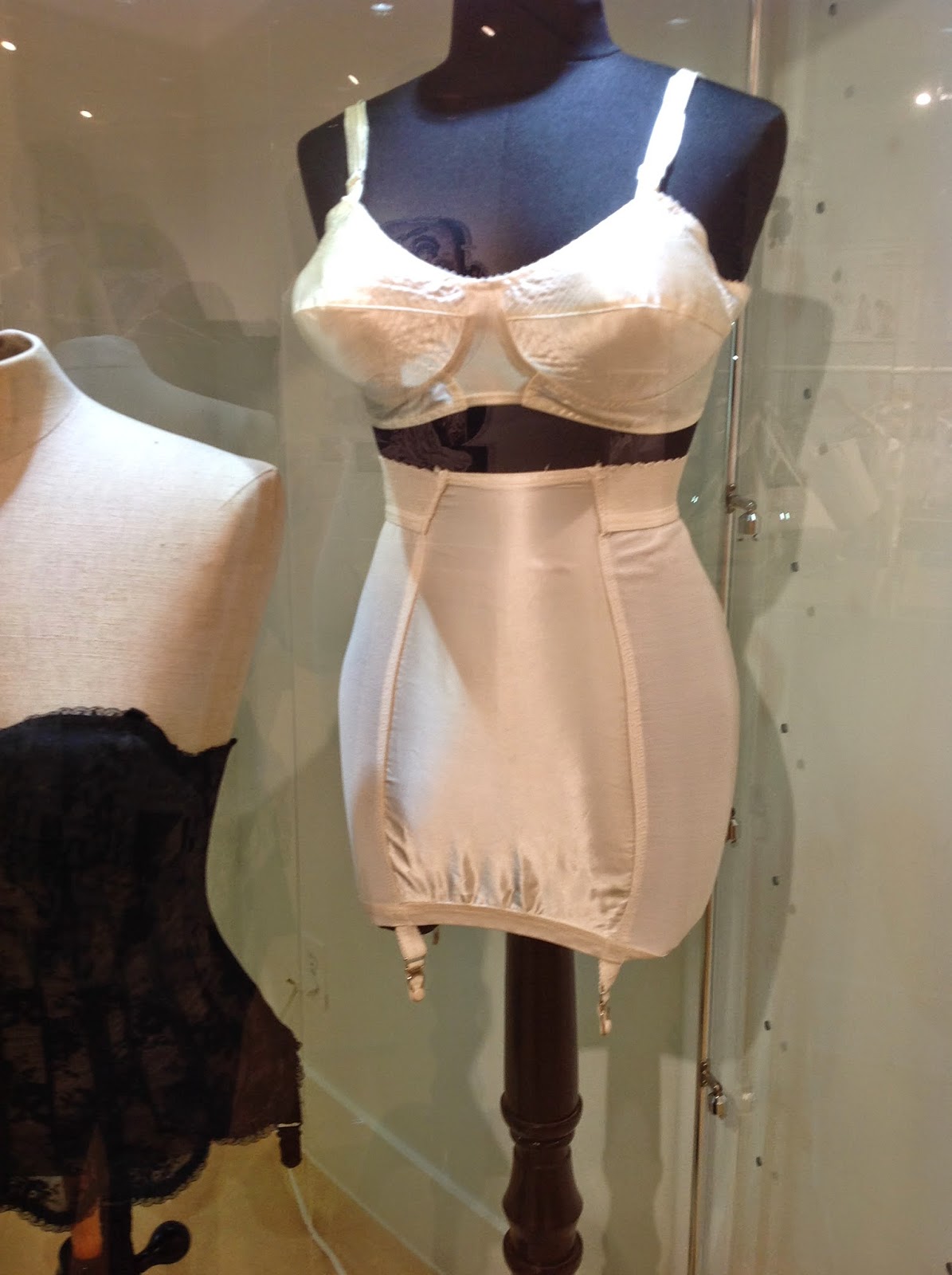 The last item in my picture book is the original WonderBra bra, invented in 1961 by Louise Poirier of Montreal who was WonderBra’s Canadian designer at the time. This was a push-up bra in an age before pre-formed molded cups. This bra depended on the design of the cups, the cut of the cloth to do the job! 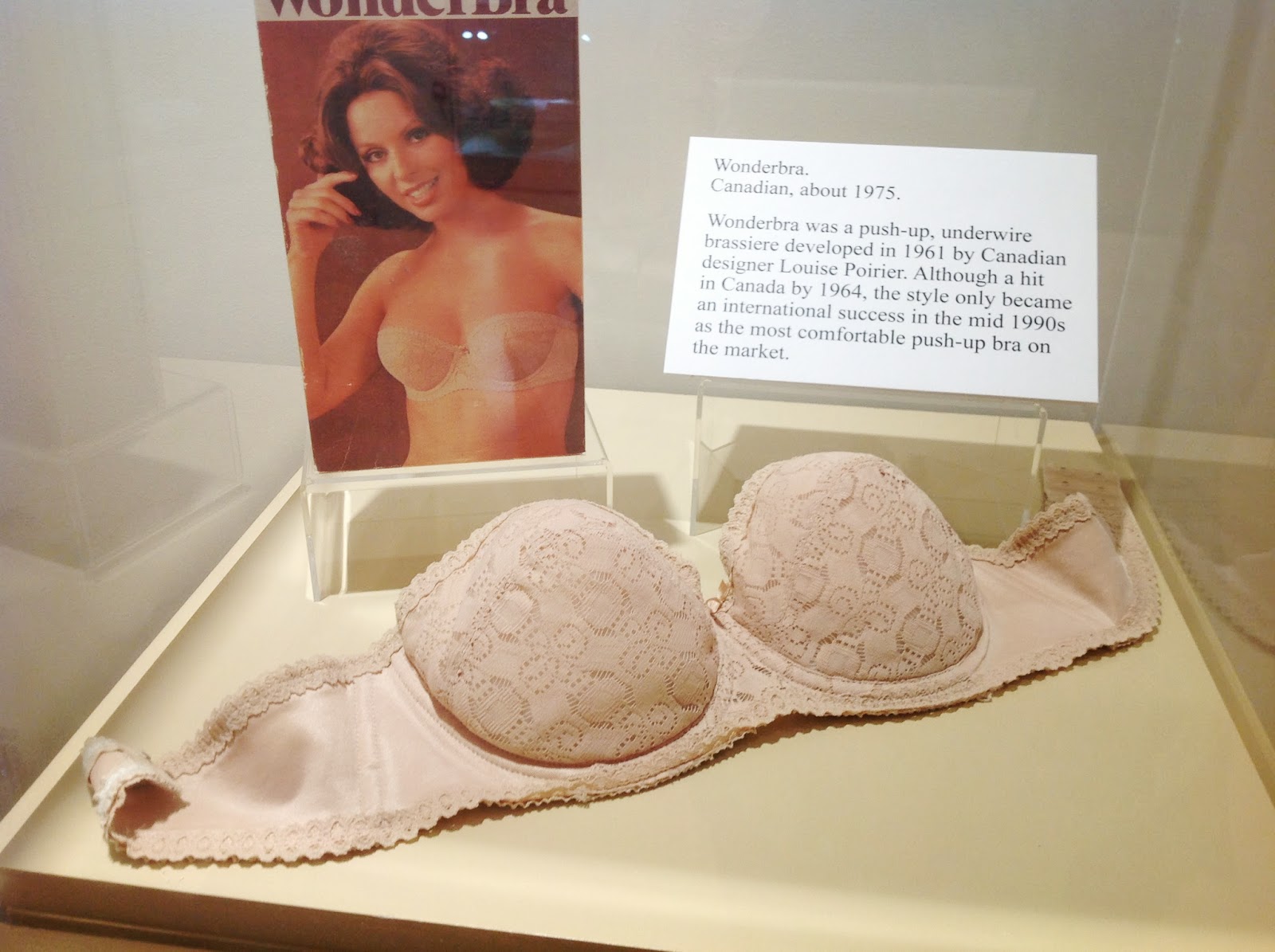 If you have a chance to visit the Waist Management exhibit, it is on until February 16,2015 at the Peel Art gallery, Museum and Archives, 9 Wellington Street in Brampton, Ontario
The website for the PAMA is www.pama.peelregion.ca
November 16, 2014/3 Comments/by Beverly Johnson
https://www.braandcorsetsupplies.com/wp-content/uploads/2014/11/waist-management-feature.jpg 1600 1195 Beverly Johnson https://braandcorsetsupplies.com/wp-content/uploads/2017/01/BMS-Website-Logo.png Beverly Johnson2014-11-16 19:22:002016-08-01 17:54:04Once Upon a Time – Waist Management