You are here: Home1 / Life of A Fairy Bra Mother Blog2 / Life of the Fairy Bra Mother3 / Our Enchanted Castle4 / In the News!
Great news! We were written up by Paola Lorrigio of the Canadian Press and featured in the Hamilton Spectator, City News and others today! So we are in the news! You can see three of our students here – Julia in the back left, Adrienne up front and Jessie with me on the right! It’s not every day we are in the news – so the students were pretty excited! 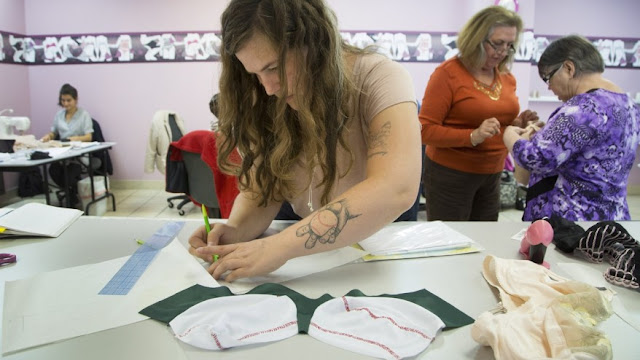 Adrienne Connelly, who has a pitcher’s hand and ball tattooed on her forearm, works on a baseball-themed bra for the Blue Jay’s post season during a bra-making class with Beverly Johnson of Bra-makers Supply in Hamilton on Wednesday, October 14, 2015. Thanks to Johnson’s expertise – she has taught over 30,000 women how to make custom bras – Hamilton has become known as the bra-makers capital of the world. THE CANADIAN PRESS/Peter Power

BY PAOLA LORIGGIO, THE CANADIAN PRESS

With bra shopping a bust in their home country of South Africa, Ndala travelled thousands of kilometres to southern Ontario to learn how to help her mother — and maybe start a business herself.
She enrolled at Bra-Makers Supply in Hamilton, a sewing store and custom lingerie school that has grown into an international attraction for both amateurs and professionals.
For nearly two decades, the store’s owner and self-described “fairy bra mother” Beverly Johnson has shown women — and the occasional man — how to handcraft bras that fit bodies of various shapes and sizes using her own patterns.
Johnson, 62, launched the school — one of the only programs of its kind — after years of leading workshops across Canada and around the world.
Between her in-person lessons and new online courses, Johnson estimates she’s taught more than 30,000 people to make beautiful and supportive bras. Some have gone on to start their own businesses or teach lingerie-making themselves in stores such as The Make Den in west-end Toronto.
A recent weeklong master class on plus-size bras saw Ndala create a pale blue prototype to take home to her mother — who has large breasts but a petite frame — and replicate. If the undergarment fits, Ndala said she plans to start sewing some for others.
“There’s really a need out there for people to make bras for people who can’t have them anywhere,” Ndala said. “You don’t get these at the stores because they never make them like this, they only make for certain sizes for average women.”
Several of her classmates already have their own lingerie lines and turned to Johnson to hone their skills.
“I really want to hit the mastectomy market,” said Holly Myers, a custom bra-maker based in Portland, Ore.
“One of my aunts had breast cancer several years back and I’m also a pilates instructor, that’s kind of my first career, and I have quite a few clients who have mastectomies as well … and they always complain about not being able to find cute bras and cute swimwear.”
After buying Johnson’s first book on bra-making, Myers sought out further instruction, but “nobody really teaches custom anywhere,” she said. Here, she learned how to make her own breast forms for mastectomy bras.
A longtime seamstress, Johnson came to lingerie in the 1990s after making dance and figure-skating costumes and running her own interior design business in New Brunswick.
She wanted something she could do out of her own home after moving to Ontario and felt bra-making was something “women can use,” she said.
But the patterns available at the time weren’t up to snuff, so Johnson set out to design her own, first taking apart dozens of existing models for research.
As Johnson’s teaching took off, a new challenge emerged: finding the proper materials to support her craft.
That remains a “major headache” to this day, she said. “In Canada especially, we’ve lost a lot of our fabric mills, we’ve lost a lot of our places to buy elastics and laces and that sort of thing,” she said.
Bra-Makers was born to fill that need and now commissions all of its elastics and most of its fabrics, she said.
The school, which operates in the back of the shop, offers a range of classes from a $225 two-day introductory course to a $600 five-day “boob camp” and lessons in swimwear and corsetry.
In the beginner class, students adapt patterns to their own body. “We don’t expect their body to fit into my bra pattern,” Johnson said.
The master classes were brought in to replace what once was a nine-week bra-making certification course after new provincial regulations forced Johnson to axe the program or register as a private career college.
With a bit of practice, even novice bra-makers can churn out a new undergarment in a few hours, she said.
Over the years, Johnson has helped women overcome several bra-related difficulties. In one case, students designed a specialty bra that closed with magnets at the front for a blind woman unable to reach behind her back.
The results can be life-changing, she said.
“We’ve done bras in our classes for women with mastectomies who had really given up on wearing nice clothes — they just wanted to wear sweatshirts to hide the fact that they’d had one breast chopped off,” she said.
“And so we’ve given them back, just through the act of having them make a bra, we’ve given them back their femininity, we’ve given them back their life, their love for fashion. We just make people happy… nobody’s going to put you down and nobody’s going to make you feel bad because we all have issues with the bra.”
October 30, 2015/2 Comments/by Beverly Johnson
https://www.braandcorsetsupplies.com/wp-content/uploads/2015/10/City-news-pic.jpg 360 640 Beverly Johnson https://braandcorsetsupplies.com/wp-content/uploads/2017/01/BMS-Website-Logo.png Beverly Johnson2015-10-30 19:48:002016-08-01 00:27:01In the News!

Bra-maker teaches how to create a perfect fit

On the job with a bra-making instructor
2 replies