You are here: Home1 / Life of A Fairy Bra Mother Blog2 / Behind the Seams3 / Design & Draft4 / Dissecting Ulla

After my last post about Cloning Ulla, I wondered how the pattern of the cloned bra compared to my Pin-up Girls Classic Bra pattern. As you know, the Ulla bra company is known for their large cup sizes so it would be interesting to see what makes them tick. Besides, when it comes to bra theory, I figured I could learn something from dissecting Ulla. 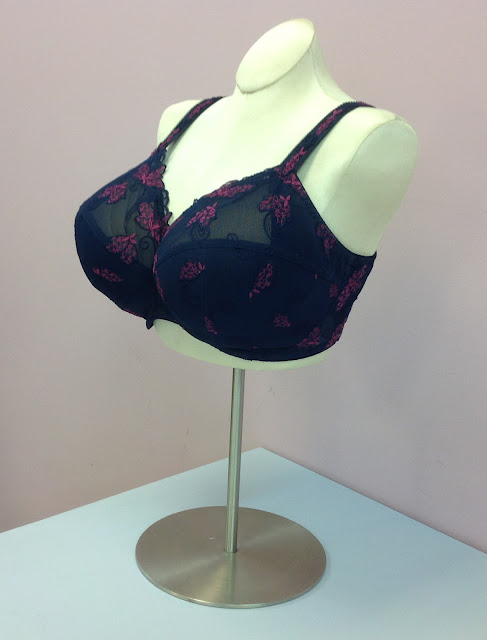 My customer loves her Ulla bra (even at the high price) and I am sure she will love the bra the cloned pattern will make. But I still have to know:

This is the stuff that keeps my brain occupied when I should be sleeping! So upon rising,  all I could think about was dissecting Ulla!

My Classic bra pattern (like all my patterns) are fairly basic patterns. I call them “springboard” patterns because once you have the fit of the pattern, you can use that pattern as a sloper to create every other bra on the planet. No, that’s not bra magic, that’s a plain fact. If you know how to dissect RTW (ready-to-wear) you can create any of its looks you like!

First I have to know what size of the Classic to start with. The 34K Ulla size on the garment label isn’t much help, as the Classic doesn’t have that size. No matter. I still can find this pattern size in the 90 sizes the Classic does have.

I use my tried-and-true BCD method of measuring an existing bra. That’s the Bottom Cup Depth, measured from the apex seamline to the wire line seamline directly below it on the body. It should be the deepest part of the lower cup.

I measured the Ulla and found it to be 7″. Then I measured my Classic Bra patterns. The size that matches a 7″ BCD is 44H, so I traced that out. If you’ve taken my Craftsy class, there is a chart in the Class materials list that has the BCDs listed and the Pin-up Girls bra sizes they equal. 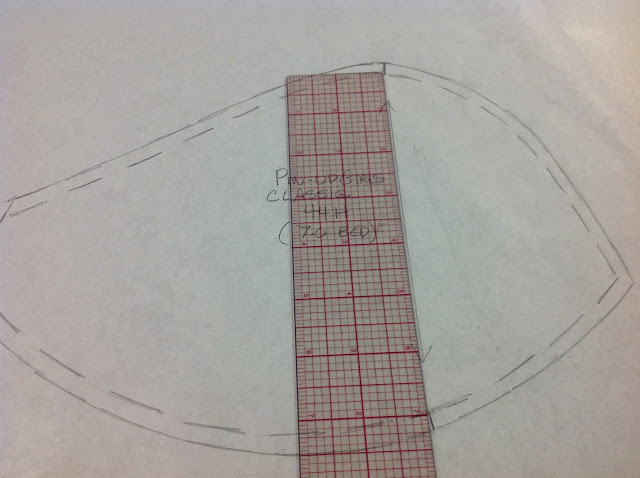 Trace out the upper cup too. In the dissecting Ulla project, I am just comparing the cup shape so I didn’t do the frame and band. Mark the seamlines (1/4″ or 6 mm) in along the cross cup seam and mark the notches at the apex and the wire line. they are critical to this process. 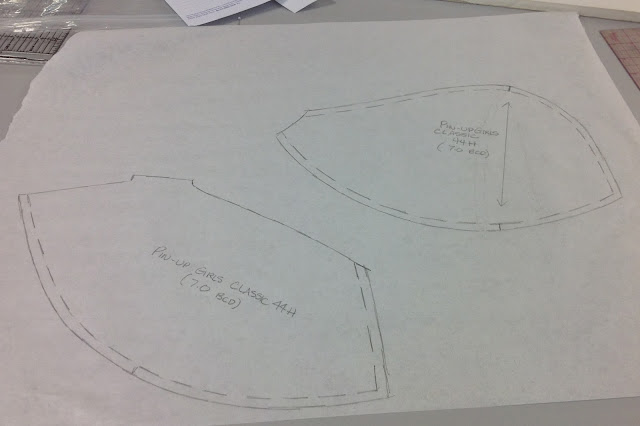 Next draw lines from the apex to the edges of the cup. The Ulla is a horizontally seamed cup and the Classic is a diagonal, so the first step is to convert our Classic to a horizontal seam. Horizontal seams are a great choice for the larger bust as it offers more opportunities for shaping around the apex. Kudos to Ulla on that one! 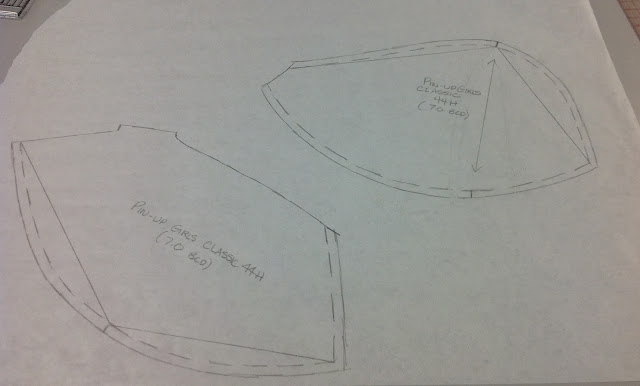 Number the small curves created by the lines. I do this so I can put them back in the right place! I’ve numbered them in a clockwise direction. The upper cup CF is #1, the lower cup is #2 and #3 and the upper cup outside is #4. Set the curves aside for now. Don’t throw them away – you will need them in a few minutes! 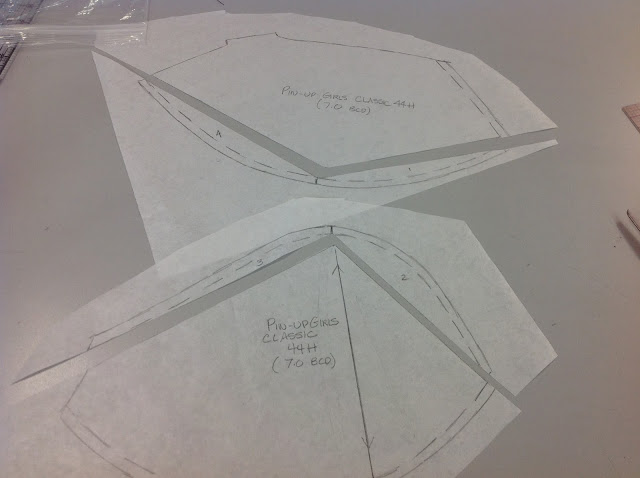 Now we can change the style lines to a horizontal orientation. I measured the distance as best as I could on the Ulla to be sure when the dissection was done, that I was comparing melons to melons, so to speak. I also split the lower cup at the point below the apex. 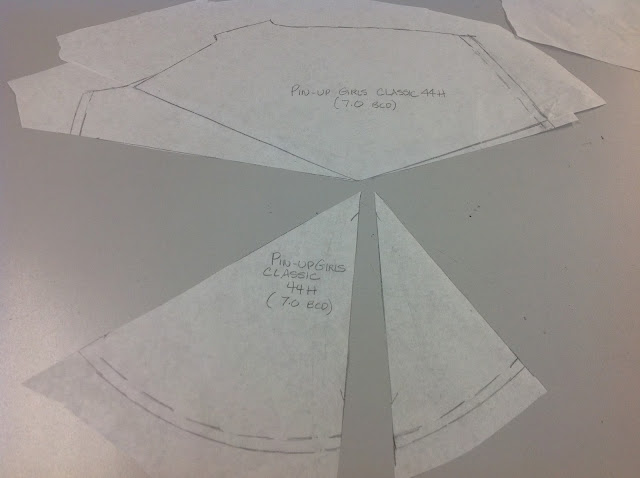 Then I put the curves back where I took them off. it is too hard to change the style lines on paper when the curves are there, that’s why I take the curves off and put them back when the job is done.

Here’s how the Classic stacked up against the Ulla. On the inner lower cup, the two were virtually identical. The Ulla is in the Pink, so you can see there is about 1/8″ (3 mm) more curve to the Ulla than on the Classic. 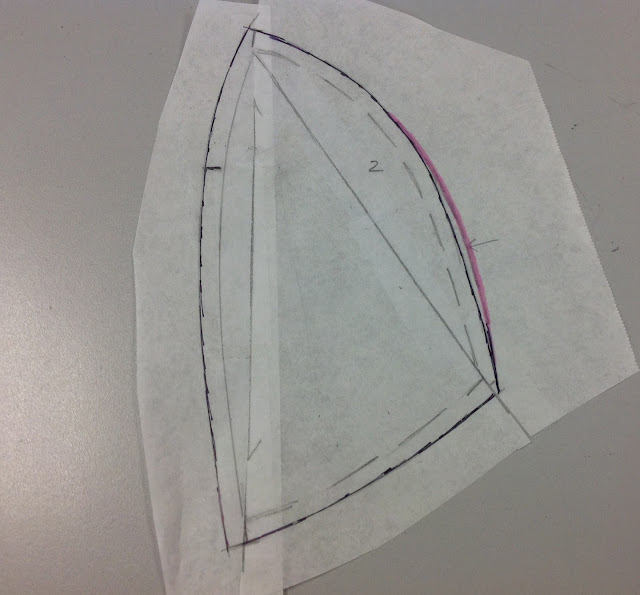 On the outside lower cup, there was a difference. The Classic is more of a straight line while the Ulla is definitely more curved. I like the push-in effect the straight line gives, but in the case of Ulla, that cross cup seam is very round. 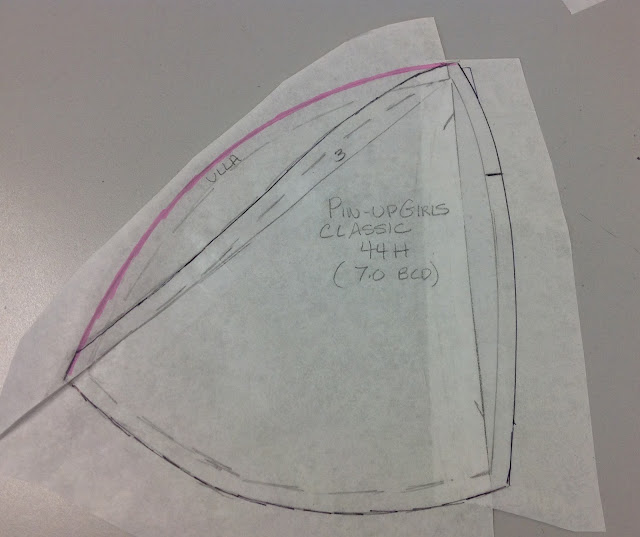 The upper cup was quite different. The Ulla and the Classic are almost the same on the inside cross cup curve – mine is actually a little more curved than Ulla. However on the outside cross cup curve, Ulla is quite straight  while mine is curved – almost a reversal of the cross cup seam on the outside lower cup (above). Makes me wonder if I switched curve #3 for curve #4, would they be more similar? Technically as long as you put back the volume you took away, the cup will still fit. So I could switch those two seams around. Something for another day! 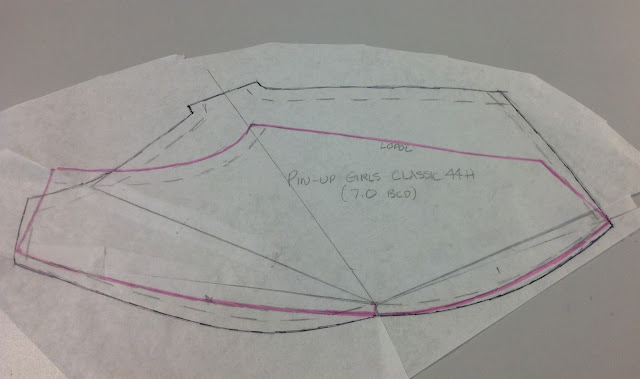 My upper cup is a lot higher at the front, yet the straps are along the same plane. Ulla’s neckline edge is a bit shorter too. Ulla comes up higher under the arm than mine.

This was very enlightening for me to see how the Classic compared to Ulla. I am delighted that the Classic was so similar to the Ulla in many ways, and this certainly gives me ideas for another bra pattern!

Have you ever been involved in “dissecting Ulla” or cloning any other RTW bra to find out what makes it tick? Please share your experiences – I’d love to hear about them!