You are here: Home1 / Life of A Fairy Bra Mother Blog2 / Behind the Seams3 / Design & Draft4 / Horizontal Hocus Pocus

As promised in this last post, I am sharing with you how to convert your Classic Bra to a horizontal seamed cup. If you want to do that, stay with me for background theory.  It’s not magic or horizontal Hocus Pocus, just good solid bra theory!

There are hundreds of thousands of styles of bras in ready-to-wear, yet each of them is different from the others in some way. Let’s not consider the fit for a moment, but the style lines of the cups alone themselves of bras can make the bra look entirely different from another bra brand or even within the same brand. Style lines = seamlines!

Seamlines in a bra can take on any number of configurations but generally speaking there are three major categories – Diagonal, Horizontal and Vertical. Seamlines must cross the apex (except in one notable bra style) and are named from their uppermost originating point.

In the case of the Classic Bra, its uppermost seam originates in the underarm area, crosses the apex and ends in the wire line. But a diagonal seam doesn’t have to be exactly like the Classic to still be considered a diagonal seam. As you can see from the coloured lines, any one of these can be a diagonal seam, and each would create a bra with different style lines than another. 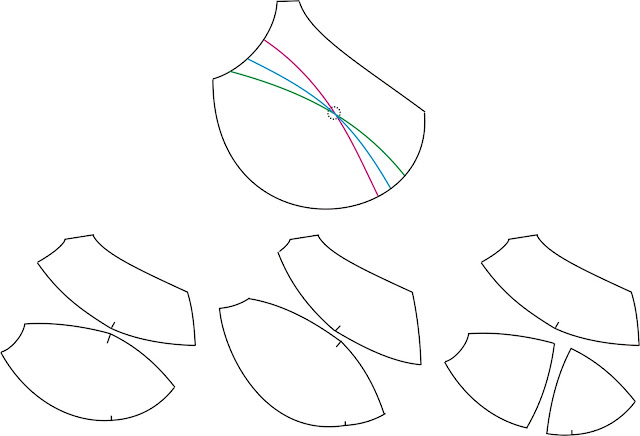 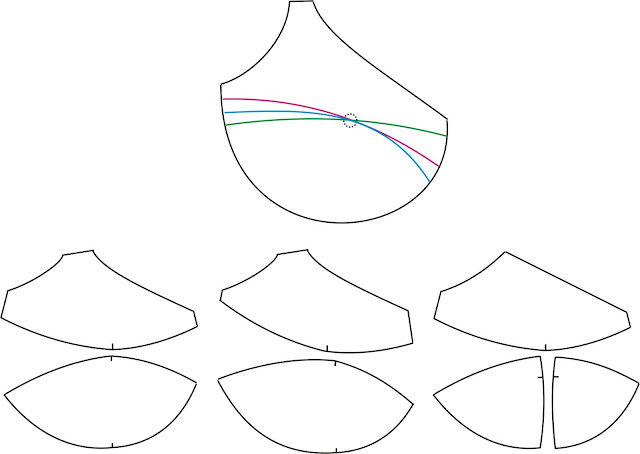 Why would anyone want a horizontal seamed cup?
Wanna have one? The we have to do some Horizontal Hocus Pocus to get started!
In my book, The Bra-makers Manual volume 1, I show how to use cut-and-sew foam to create a 3-D cup, then cut it apart to make other style lines. That method works very well, especially on style lines that are complex, such as a baseball cup. But sometimes you just want a simple seam line change and you don’t want to waste your cut & sew foam. I get it. This is how to do it on paper.
First trace your Classic Bra upper and lower cups and remove the 1/4″ seam allowances from the cross cup seams. 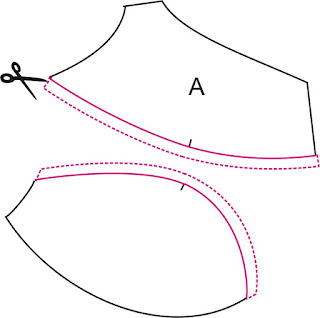 Then draw straight lines from the apex notch to the edges of the cup. You should have 4 straight lines. Label them as shown here. Lines 1 and 2 should be equal in length and so should 3 and 4. Now cut off the curved bits and put them aside for now 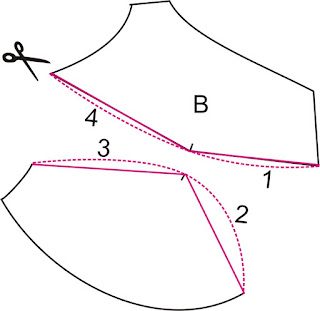 Now decide where you want the new line. You can try on the Classic bra, and mark the place where you think you’d like the seamline. Generally you want the line in the front lower on the body than the line at the underarm.

Check out these two cups that are identical except for the seamline orientation. The one at the top has the seam in the front lower than the side – the one below has the seam lower on the side. The horizontal line on the second drawing is going to interfere with the trim around the neckline edge (too much going on in that small area) but the whole cup looks “sad”, like a frowny face for your boobs. 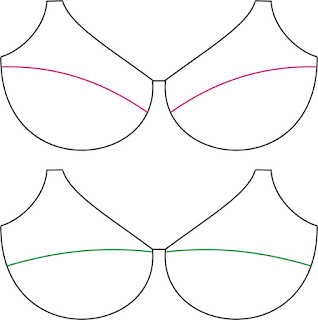 I wanted the new front seamline about half-way along the front edge. I drew the line to the apex, then cut off that triangle and move it to the lower cup. I have transferred the paper from the upper to the lower cup. 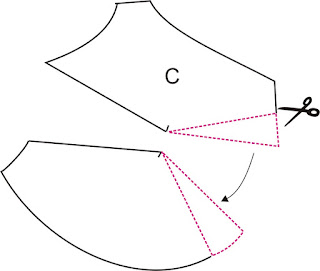 Next I do the same with the outside of the cup. I transferred some of the lower cup to the upper cup 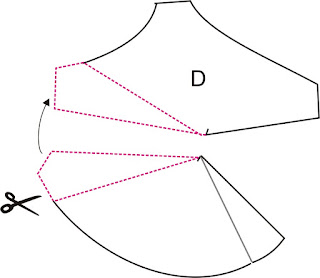 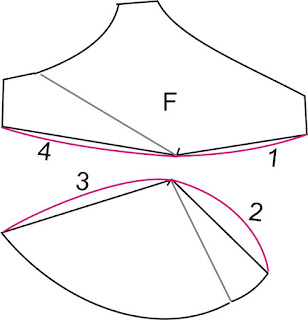 You may have to smooth out the curves, but it is important to remember that you are not adding or removing volume, just shifting the seam line within the same volume of cup. You will find that the lower cup now almost always looks like a football! On the upper cup, you will always have two short edges above the cross cup seam. 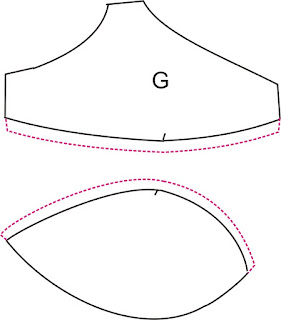 Add your seam allowances back on the cross cup seam and you are ready to cut out your new horizontal cup! Just like horizontal hocus pocus, or magic! Maybe you will make a Heather bra like we did for the Craftsy class Sewing Bras: Foam, lace & Beyond… 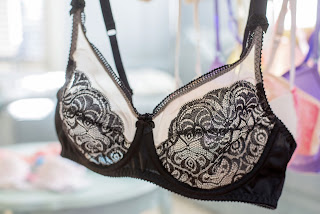 Or make one like Linda of Uplift Custom Bras did using an alternate colour way! Linda does such an incredible job on her bras – I often cannot tell them apart from very expensive RTW! 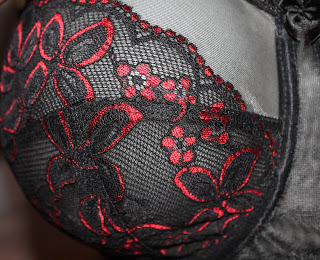 Heather in Red and Black
3 replies

Heather in Red and Black