You are here: Home1 / Life of A Fairy Bra Mother Blog2 / Behind the Seams3 / Navy Multiple Strap Bra

Time for another peek Behind the Seams! This time, a close-up look at what I call the Navy Multiple Strap bra. This bra was featured in the Craftsy class Sewing Bras: Designer Techniques (I can’t believe there are 30 different techniques in that class!) 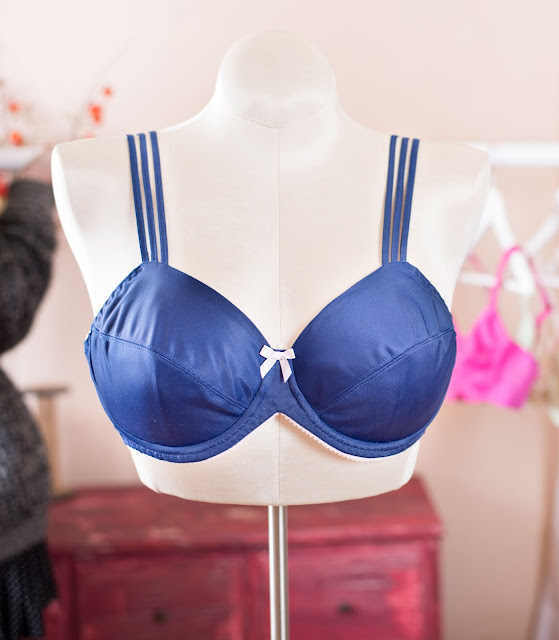 Before we get to the obvious use of multiple straps – let’s have a look at the inside. There’s a Gothic Arch on the bridge! And you can just see – there is NO neckline trim, but it looks to be a seam…what’s up with that? Notice too that the channels have a bartack at the front – that’s because the trifecta kicked in! (more about that shortly) 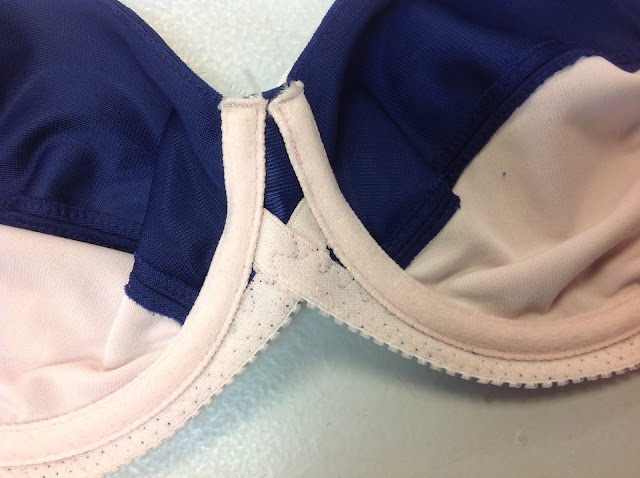 Also that pink lining is actually a pocket for extra padding. 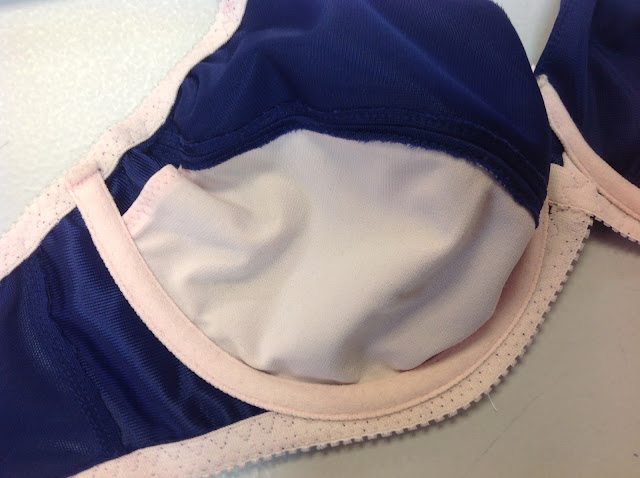 So the features of this bra include

I might also draw your attention to the fact that while the outside of the bra is navy, the elastics are pink but yet, no thread shows through to the other side. Experienced sewists might know right away we used pink on top and navy in the bobbin to sew these elastics, but new bra-makers might not know to do that. It’s one of those details that sets a professional quality bra apart from the “loving hands at home” category. You may have to adjust your tension slightly to keep the colour from showing through to the opposite side.

The upper cup was cut as a straight top instead of the usual with the strap tab, and cut as 4 instead of 2.

Then we made the tiny multiple straps. In this case we used duoplex which is firm enough that when made into these tiny tubes will resist stretching. The tubes are cut 4 times the desired with, folded in half lengthwise, then each raw edge is folded toward the middle. OR…you can use a 1/2″ tape maker such as this to make the tubes, then fold them in half.

By the way, don’t cut these on the bias – cut the tubes with the DoGS running with the short side.Make 3 for each side

Line up the small tubes on the cup but in 3/8″ from the edge to allow room for the underarm elastic. Space the tubes 1/4″ apart and at an angle something like this so they will be directed to the shoulders and not your neck! (If you have the Craftsy class, there is a template for this in the class materials list) 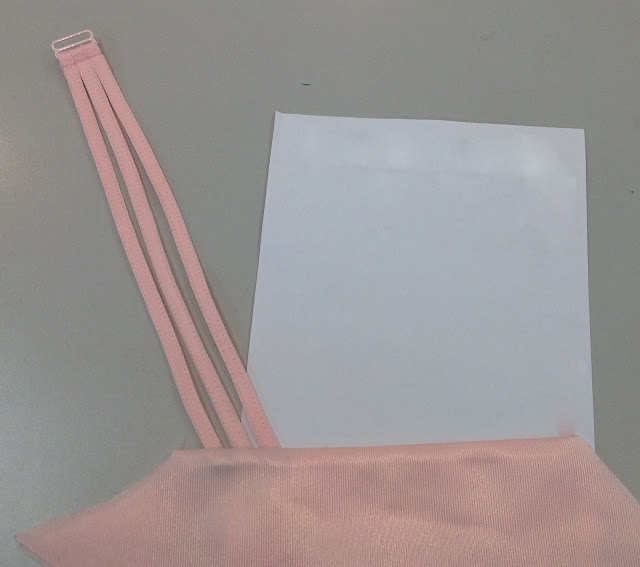 Only after sewing them to the bra will you attempt to wrangle them into the slider! I like to use three 1/4″ straps as then they will fit nicely into a 3/4″ slider! Also this is where you would sew the second layer of the upper cup to the neckline. 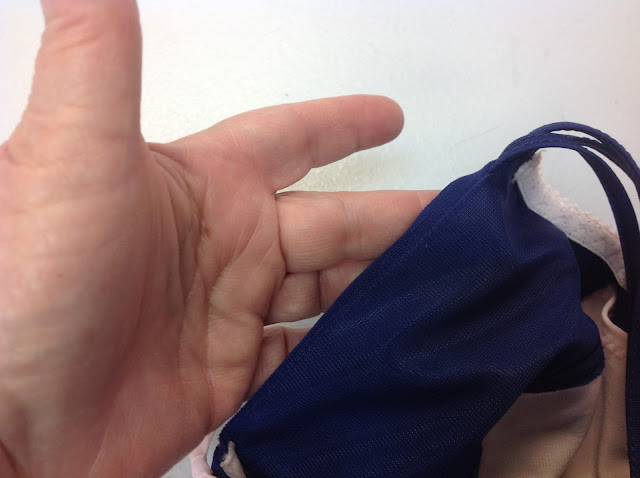 The seam is understitched to the lining side (the inside) so it stays behind the top layer at all times. Understitching is not topstitching – with understitching, no stitches show on the outside fabric. 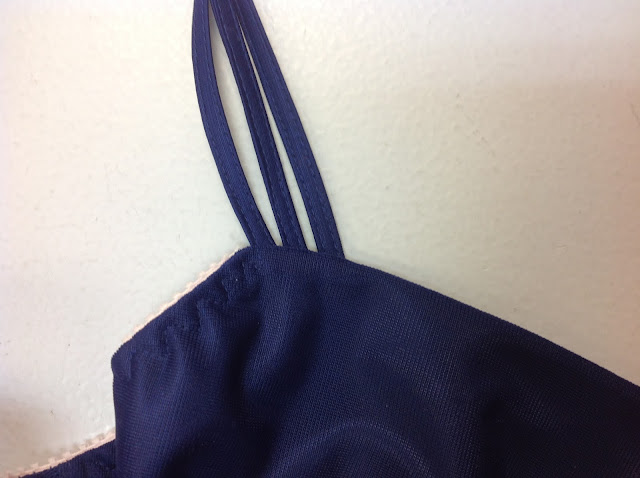 Now that the upper cups are done, lets talk about the trifecta and how it kicked in on the Navy Multiple Strap Bra! A trifecta is a term that indicates a run of three wins or grand events. In the case of bra-making – the three grand events are the finishing of the neckline, the top of the bridge and the straps. (Don’t you love how I take words from the “outside” world and bring it home to us? lol)

If any one of the three areas is finished, you must finish the other two before they can be sewn together. Since the neckline is finished, I had to also make sure the straps were finished before I sewed them to the neckline and I must also finish the top of the bridge. I like to use a lining piece sewed to the bridge and turned to the inside (and that leaves a nice clean edge).

Here’s a tip – if the neckline is finished with lace, or seamed as this navy one, the channel must be finished as shown here – the channel ends and the bartack are exposed. 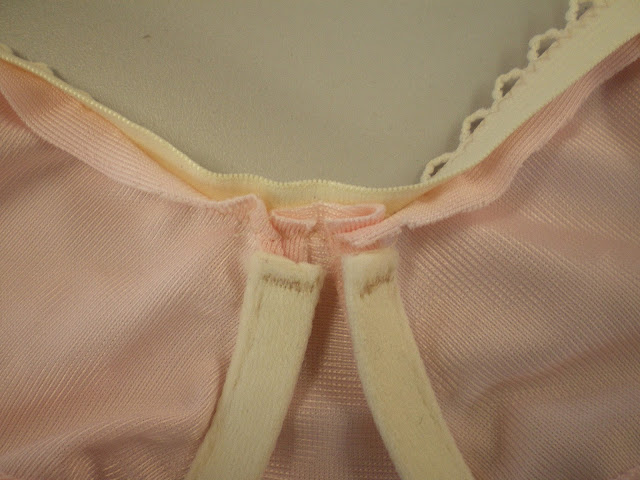 Let’s look at the pocket for the padding. The pocket is made from the lower cup pattern, with some of the underarm end cut shorter and hemmed with a zig-zag or a 3 step zig-zag so the pad can be inserted. Make sure the fabric is stretchy so the pad can be wrestled into the space!

So that is the Navy Multiple Strap Bra! If you have any favourite bras from the Craftsy classes, or from RTW that you would to see Behind the Seams, please be sure to let me know in the comments. I really do read them, and I love doing this series! 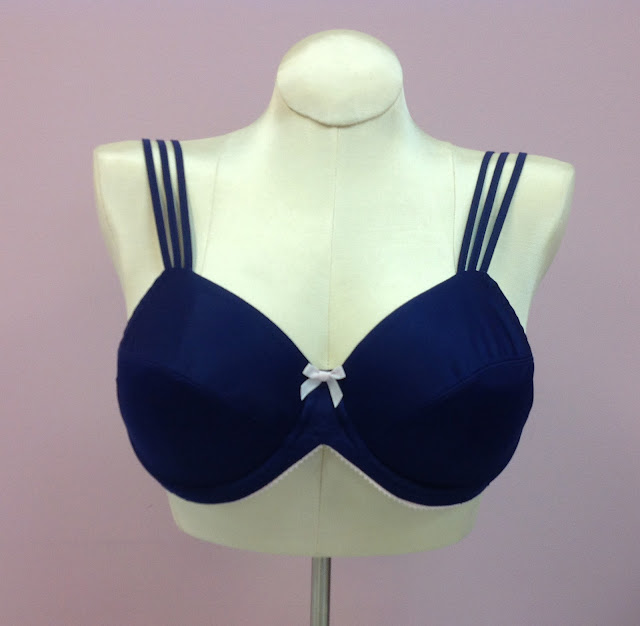 How to Sew a Gothic Arch
15 replies

The Ivory and Green Demi Bra