Today is National Zipper Day. And it is high time someone recognized its true worth and give the zipper its own National Day.  It’s been a long way up for the humble zipper, the mechanical wonder that has kept so much in our lives together. Today in the garment industry, we take the zipper for granted but did you know it has been around for only 80 years?

The following information is paraphrased from Wikipedia and About.com, with a few comments of my own.
Elias Howe, inventor of the sewing machine received a patent in 1851 for an ‘Automatic, Continuous Clothing Closure.’ Howe’s device was more like an elaborate draw-string than a true slide fastener. Perhaps it was the success of the sewing machine, which caused Elias not to pursue marketing his clothing closure (as in…don’t give up your day job, Elias).  As a result, Howe missed his chance to become the recognized ‘Father of the Zip.’

Forty-four years later, Mr. Whitcomb Judson marketed a ‘Clasp Locker’ a device similar to the 1851 Howe patent. Being first to market the idea gave Whitcomb the credit of being the ‘Inventor of the Zipper’, However, his 1893 patent did not use the word zipper.
The Chicago inventor’s ‘Clasp Locker’ was a complicated hook-and-eye fastener intended for shoes, shown at right.  he and a partner formed the Universal Fastener Company. The clasp locker made its public debut at the 1893 Chicago World’s Fair but unfortunately met with little commercial success.
Swedish-born Gideon Sundback, an electrical engineer, was hired to work for the Universal Fastener Company. Good design skills and a marriage to the plant-manager’s daughter Elvira Aronson led Sundback to the position of head designer at Universal. He was responsible for improving the far from perfect  fastener.  Unfortunately, Elvira died in 1911. The grieving husband busied himself at the design table and by December of 1913, he had designed the modern zipper. (grieving affects people differently, doesn’t it?)  Sundback retained his non-US patent rights and used these to set up the Lightning Zipper Company in St. Catharines Ontario (!) This common misconception led to the belief that the zipper was a Canadian invention.
Gideon Sundback increased the number of fastening elements from four per inch to ten or eleven, had two facing-rows of teeth that pulled into a single piece by the slider, and increased the opening for the teeth guided by the slider. The patent for the ‘Separable Fastener’ was issued in 1917. Sundback also created the continuous zipper chain manufacturing machine for the new zipper. Within the first year of operation, Sundback’s zipper-making machinery was producing a few hundred feet of fastener per day.

The popular ‘zipper’ name came from the B. F. Goodrich Company, when they decided to use Gideon’s fastener on a new type of rubber boots or galoshes and renamed the device the zipper, the name that lasted. Boots and tobacco pouches with a zippered closure were the two chief uses of the zipper during its early years. It took twenty more years to convince the fashion industry to seriously promote the novel closure on garments. (why so long, guys?) 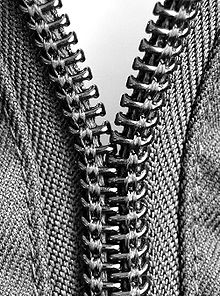 In the 1930’s, a sales campaign began for children’s clothing featuring zippers. The campaign praised zippers for promoting self-reliance in young children by making it possible for them to dress in self-help clothing. (because mothers are busy enough)
The zipper beat out the button in the 1937 in the “Battle of the Fly,” when French fashion designers raved over zippers in men’s trousers. Esquire magazine declared the zipper the “Newest Tailoring Idea for Men” and among the zippered fly’s many virtues was that it would exclude “The Possibility of Unintentional and Embarrassing Disarray.” (Obviously, the new zippered trouser owners had not yet discovered the experience of forgetting to zip-up)


The next big boost for the zipper came when zippers could open on both ends, as on jackets. Today the zipper is everywhere (yes, we use them on some bras, too!) Thousands of zipper miles produced daily, meet the needs of consumers, thanks to the early zipper inventors.
Sooooo, Happy National Zipper Day! Make a zipper happy today by sewing one in a garment!
April 29, 2016/0 Comments/by Beverly Johnson
https://www.braandcorsetsupplies.com/wp-content/uploads/2016/04/National-Zipper-Day-animated.gif 320 320 Beverly Johnson https://braandcorsetsupplies.com/wp-content/uploads/2017/01/BMS-Website-Logo.png Beverly Johnson2016-04-29 08:52:002016-07-31 00:35:52National Zipper Day

Add a zipper to your bra
0 replies